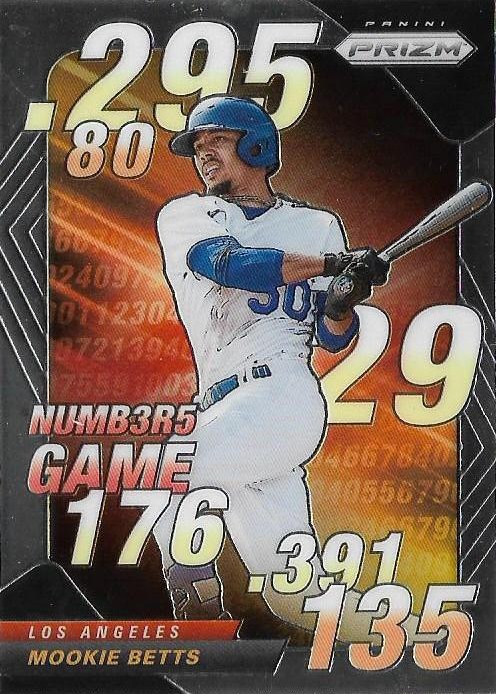 I am old enough that I don't really get modern ball players.
It just happens. You get to a certain age and stuff doesn't make sense anymore. I didn't plan for it to happen. It just did.
I'm OK with baseball being different than when I grew up, it would be weird if it remained the same as it was in the '70s and '80s. Nothing else about life is the same as it was then. And although I miss the stolen base and pitchers going 9 innings and ... singles for crying out loud ... I understand. Things change.
The most difficult thing for me might be the emotional displays in the game today.
Obviously, the "histrionics" -- as I've called them in the past -- didn't happen much in the game when I was growing up. But as baseball has evolved culturally, so has players' behavior and I'm trying to keep up. I am not an outwardly emotional person. If I were to do something great on the field, I would have to force myself to do anything beyond raising my hands over my head.
So I'm still getting used to some of the outward expressions. I accepted bat flips a long time ago. Displays immediately after a great feat, are fine, too. It'll take me awhile to get used to all the gesturing to the dugout. The Dodgers do this constantly and it's always weird and seems completely unnecessary to me.
One player I like a lot who does a lot of celebrating is Mookie Betts.
Betts is the kind of modern player I enjoy. He brings something new to the game, he's amazing at it and he's also exceedingly likeable. He isn't confrontational or cocky, isn't a big self-pimper. He seems genuine in realizing the game is bigger than himself.
But modern cards seem to fit him. I've been picking up a few modern cards of Betts -- cards I wouldn't buy for anyone else -- because they just work. Betts is still a fairly young star, he led the Dodgers to a World Series title, there should be some cards from that time to recognize that in my collection. 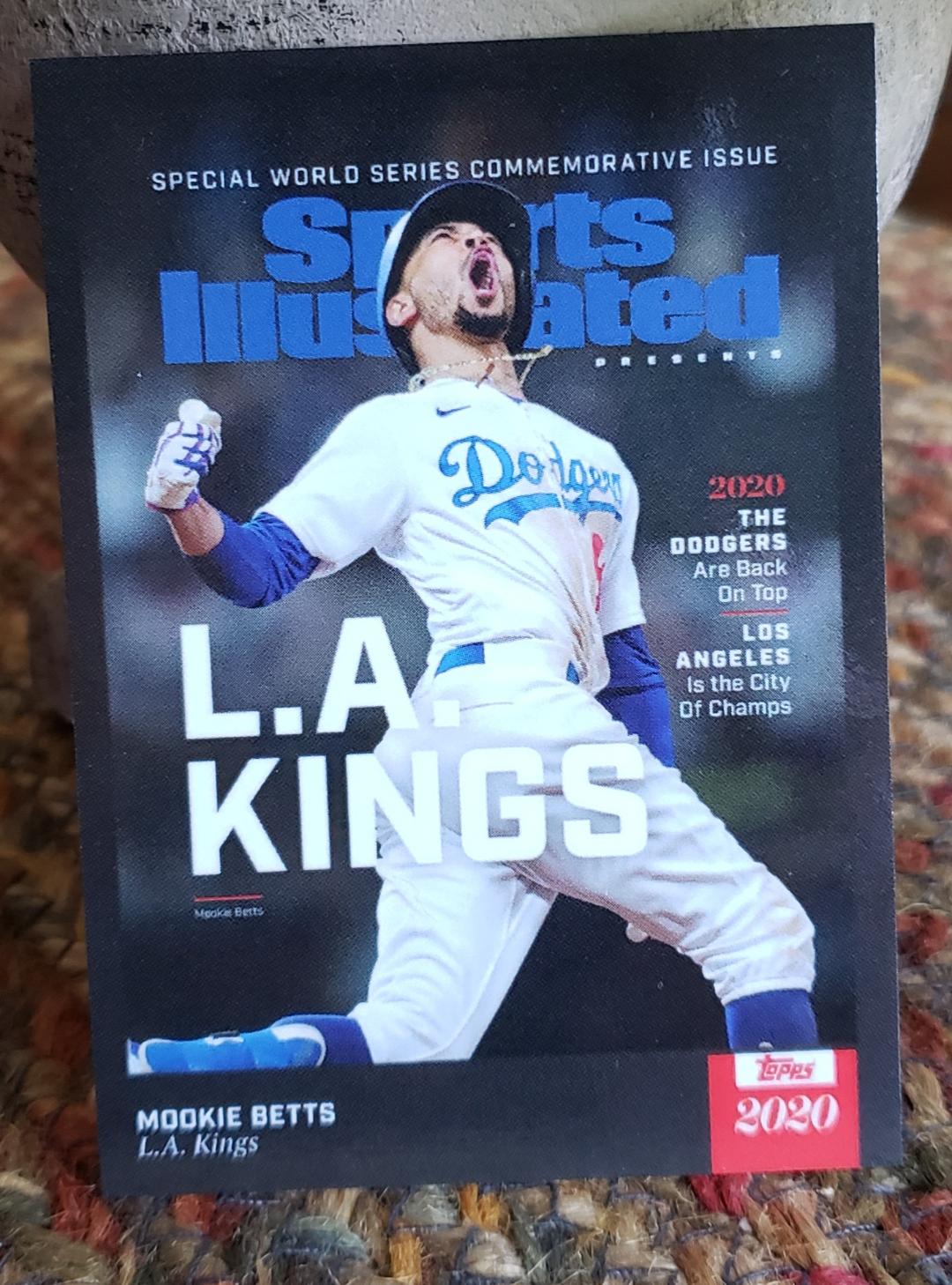 There's some celebrating now. But if you aren't going to celebrate after hitting a home run in Game 6 of the World Series, when are you?
This is one of the Topps X Sports Illustrated online cards from this year. Topps is rolling out a 70-card set of past SI covers and I had to jump on this one. I love the late '90s Fleer Sports Illustrated covers set and cards of magazine covers in general rule. This was a no-brainer.
Topps has released two other Dodgers in this set so far, Duke Snider and Clayton Kershaw, but only Betts has appealed to me. 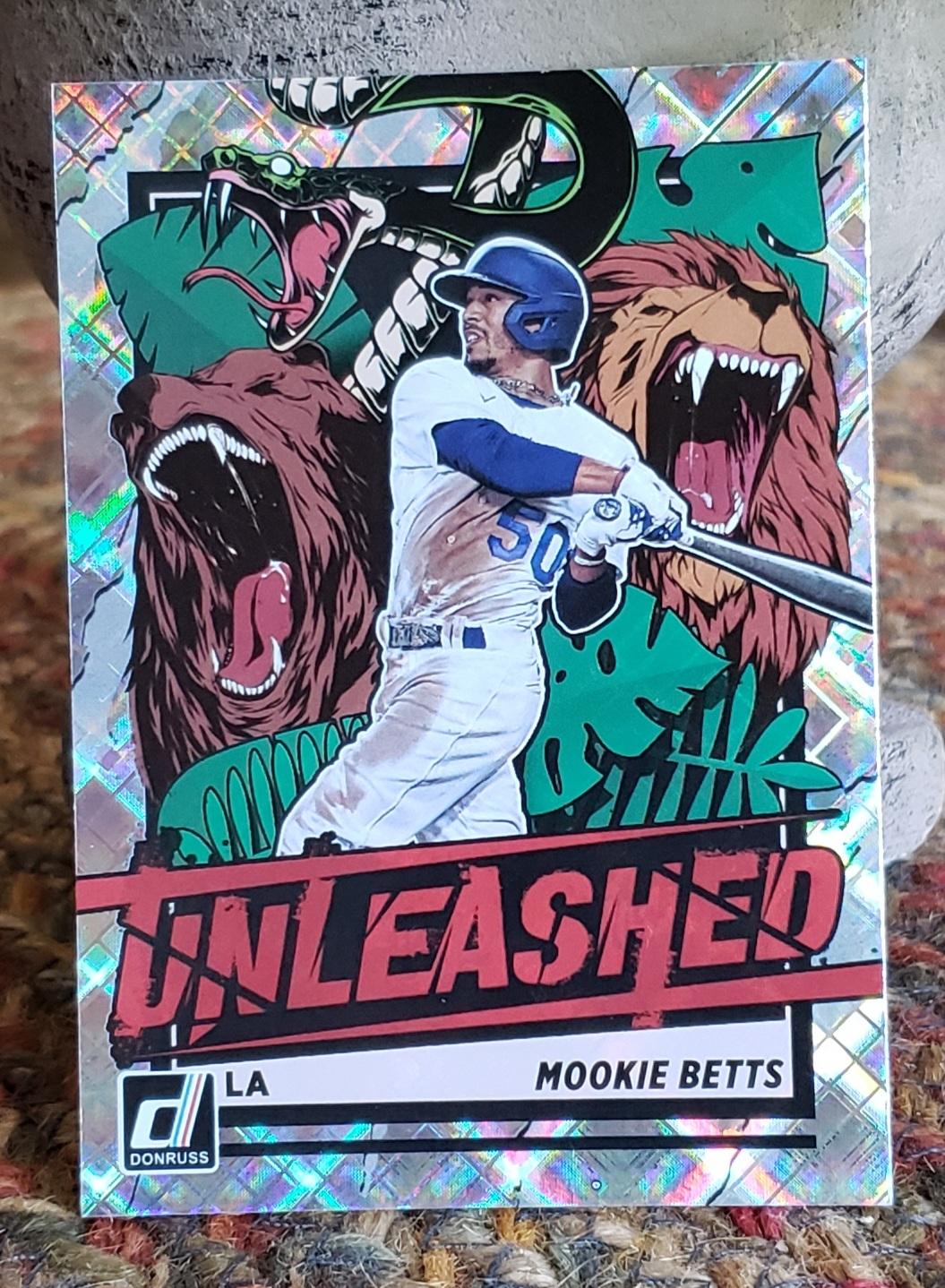 I grabbed one of the Panini Donruss Unleashed cards that everyone is raving about off of ebay. This is "the vector parallel."
This is as modern as it gets. I do like the snakes and lions and bears in the background but I seem to be the only one who is annoyed by the fact that the same damn background is on every one of these Unleashed cards. That doesn't exactly make them special and it is soooooo Panini (plus there's that generic Panini uniform that will always bug me).
But Mookie seems at home with the wild animals, calmly unleashing another big fly. 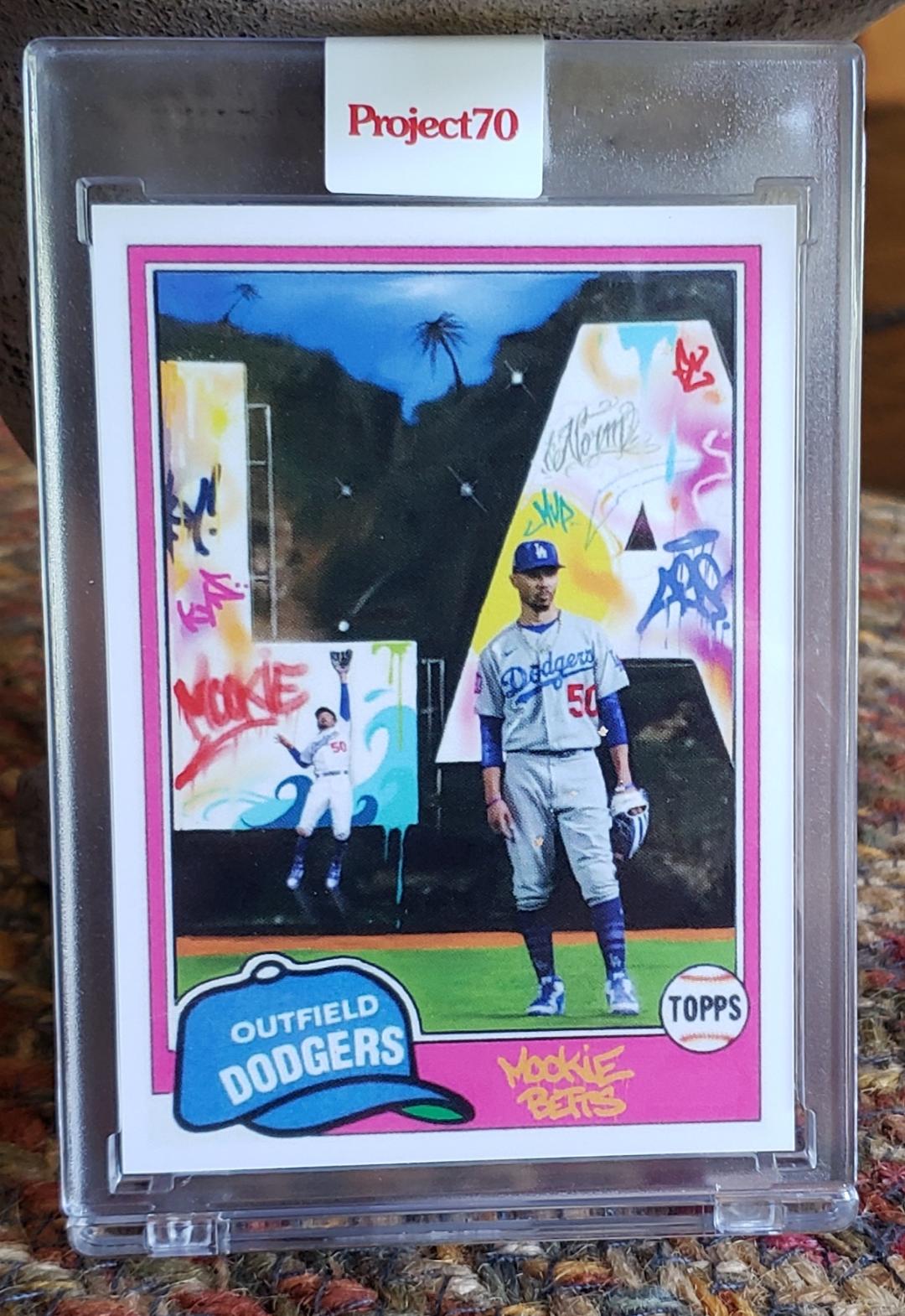 Yup. I've plunged into the Project 70 money grab pool.
I'm pretty over the artist-inspired card creations that Topps continues to offer up, it's the second year of this stuff and the prices are still $19.99 per!
It took me a long time to see anything from Project 70 that was worth my dollars. The Dodgers have been over-represented in this exercise and I still couldn't find anything I liked until a couple of recent Mookie cards.
I don't follow the artists involved with this, I know only a couple. But the deciding factor on whether I buy one of these is solely "do I like the look of the card?" and "can I afford one?" Mookie has appeared on at least two Project 70 cards in the Bo Jackson pose and I'm so tired of that pose (it only really works for Bo). So I've bypassed those.
But I like the night vibe and the graffiti letters on this card made by "CES," or Robert Provenzano. I like the graffiti lettering of Betts' name on the 1981 design. It's a cool card.
Not as cool as this one though: 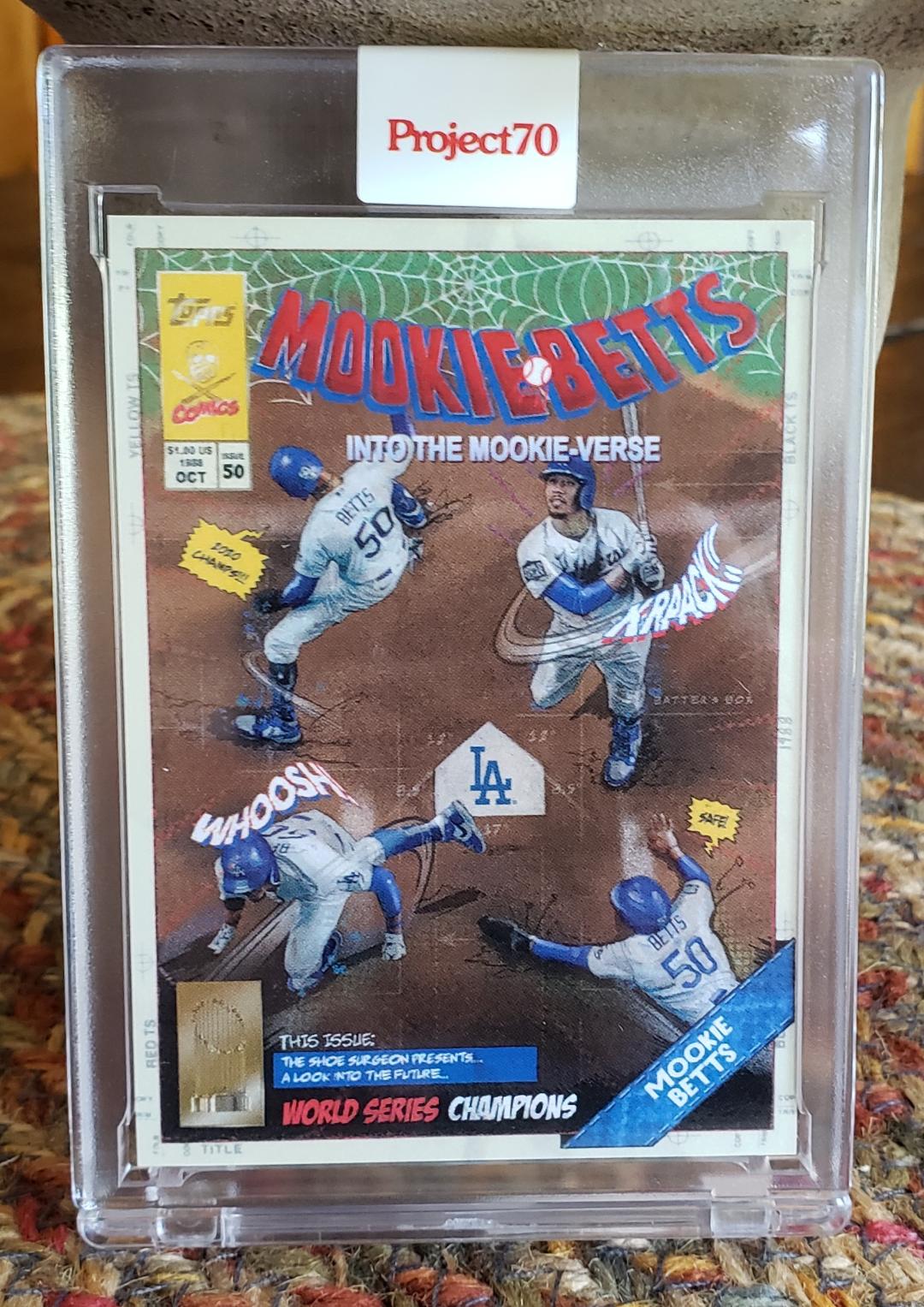 All that stuff I said about magazines above? Same goes for comic books. Except even cooler.
I guess if you're going to get an old-school guy interested in a new-school card, you need to create an homage to old-style Spiderman comic covers on a 1988 Topps design.
This card was created by someone (or someones) called "The Shoe Surgeon" and it is the first of the Project 70 cards -- after four being released every day since April -- that made me say "gimme." I waited a little bit to get 5 bucks knocked off the price and now it's here and it's fantastic.
Unlike last year's Project 2020 cards that I own, I will not be displaying these encased or on a stand. I intend to break out both Project 70 cards and store them in my Dodgers binders with the rest of the 2021 cards.
Mookie's a special player who makes special cards, but I'm still the same guy who grew up with '70s and '80s baseball who believes Betts remains just one component of a team. I like my collection of cards to represent the team more than the player.
That's how I celebrate baseball. Quietly in my card room. With no more than a fist-clenched "yes!" or an uttered "weeee!" to my somewhat disinterested wife.
You do you. I'll do me.

Nick Vossbrink said…
The logoless Panini bugs me a lot less than the blue numbers on the front of his jersey.
June 14, 2021 at 8:03 PM

Johnnys Trading Spot said…
I'm not sure that is the "vector" Unleashed. I have bought 3 supposedly vector parallels and all 3 are different adn different from what you have too. Crazy.
BTW, that's a lot of new Mookie's.
June 14, 2021 at 9:36 PM

Jim from Downingtown said…
I was all set to agree with you, but then you went and excused Betts' histrionics, seemingly because he is a Dodger.

So you are allowing nonsensical behavior for your faves? Seems like a double standard.
June 14, 2021 at 11:29 PM

Nick said…
I hadn't seen that "Mookie-verse" Project 70 card until now - it's one of the few that's actually grabbed my attention. I also wish those SI cover cards were a regular pack-issued product, because I'd be all over 'em if they were.
June 15, 2021 at 1:00 AM

Chris said…
The '81-style project 70 card might be the first one I really like. None of the others look like they could actually be a baseball card. I'd almost forgotten it was supposed to be a work of art.

The Topps SI Covers are news to me, I'll have to look into them. Also "L.A. Kings" has me picturing Mookie adding some on-ice flair to that stale franchise lol.
June 15, 2021 at 8:08 AM

Fuji said…
That Project 70 comic book card is awesome! I'd pick up a copy if I found an affordable copy. I think the only other card from this Project that I really, really want is the Dock Ellis.

Mookie is a very likable athlete for all of the reasons you mentioned in this post.

As for the game changing and players celebrating... I love it. I'm definitely not about a player going out of his way to disrespect the opposing team, but a nice bat flip doesn't hurt anyone.
June 15, 2021 at 10:18 AM

Bo said…
I was a baby in the 1970s but I find it hard to believe players weren't displaying emotion on the field. Maybe it was a different kind of emotion - more fights, for example. But I don't think most players in that era looked like soulless automatons on the field.

What we are calling "emotion" today is really look-at-me celebrations - the elaborate walk-off home run rituals, the posing after a home run. The players seem like they are going through a script. Pretty much everyone now stares after a home run instead of running. A couple of weeks ago Clint Frazier hit a walk-off for the Yankees and stood at home plate for a few seconds before running. The ball landed in the first row - a bit of wind or a great leap by the outfielder would have made for a real embarrassment there. Someday soon someone's going to "pose" for a ball that doesn't even go out, in a key game, and it will be a big controversy.

This seems very different from the kind of on-field emotion that a Pete Rose or Lou Piniella displayed in your era.
June 15, 2021 at 11:34 AM

night owl said…
I don't mean to imply that '70s and '80s players didn't show emotion. They did, all you need to do is watch a game from that time on youtube. But as you say, the emotion was spontaneous, not pre-planned, the "look-at-me" stuff was pretty much restricted to Reggie Jackson and he was blasted for it.
June 15, 2021 at 11:42 AM

John Collins said…
This post echos a lot of my own "modern player" thoughts as well, thanks for this! While I can't say I'm a fan of the artist type concept cards, I am a Mookie fan and recently landed the card that was #1 on my wantlist for him - the '14 Heritage high number RC. Just a gorgeous card. Keep up the good work! I look forward to your blog every day.
June 15, 2021 at 1:22 PM

cardstacks said…
I had to pick up an Unleashed card of Rafael Devers. I also expected each card would be different. Missed opportunity for sure. Love the Mookie Project 70 cards you picked up. 19.99 is tough to swallow. Those are two of the best I’ve seen, though.
June 15, 2021 at 6:45 PM