The darkest of my dark periods 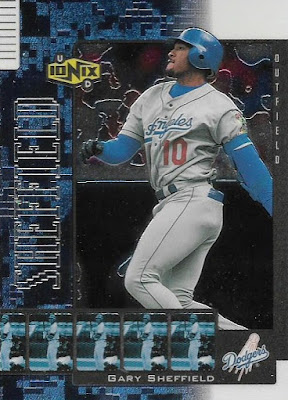 I kind of forgot about the eclipse today. I know that's difficult to do with it being mentioned every 20 seconds. But I was offline for the first half of the day.

While running a few errands I started noticing people randomly congregating on the street. One young woman started to put a box over her head -- "what the heck?" I thought as I drove past. And then I remembered, "oh, yeah, the eclipse! That's why I'm seeing people actually venturing outside!

Here in the Northeast it didn't get dark. I'd call it "slightly overcast." While someone I know in Idaho was throwing an eclipse party, it was just another hazy day in upstate New York.

But the occasion does give me a chance to relive that dark period in my collecting career. Those of you who have read this blog for awhile know that my collecting "dark period" ranged from 1994 to 2005. But just like the eclipse, it wasn't pitch black all those years. I collected a little in '94 and '95, a tiny amount in '97 and '98 and here and there from 2003-05.

Recently, Corey from the Tim Wallach and 1952 Topps blogs sent me some Dodger cards that came straight from that 100 percent totality period. The darkest of the dark periods.

Corey mentioned that he wasn't collecting then either and added "I have no idea what most of this is."

Oh, boy, so both of us were clueless. I knew what that meant. I was going to have to find some time to research what this was and also what I needed.

It took a hour or two but I think I've figured it out. I needed about one-third of what he sent (good news for some other Dodger collectors) and the vast majority of it is from 2000-02.

Let's find a flashlight and take a walk through the dark period, shall we? 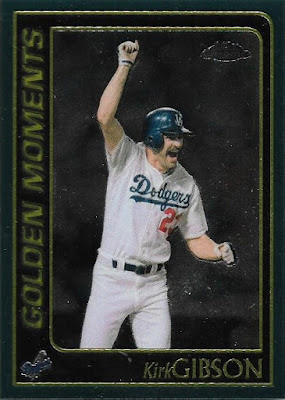 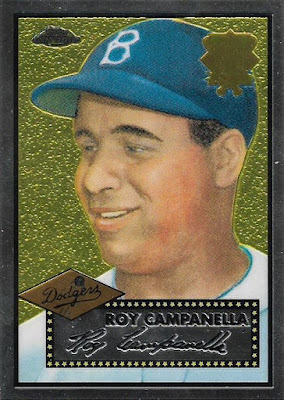 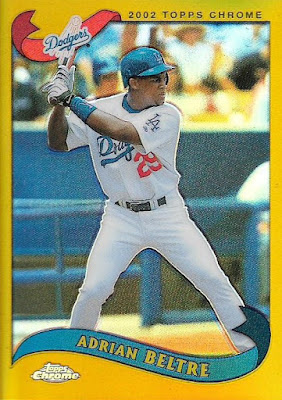 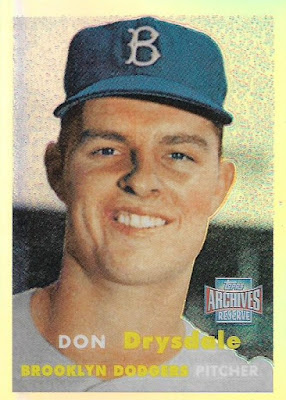 Some Early Aughts Chrome needs. It's kind of cool to see a '57 rookie Drysdale all chromed up. Normally that weirds me out, but there's something slick about this one. It's probably Big D's grin. 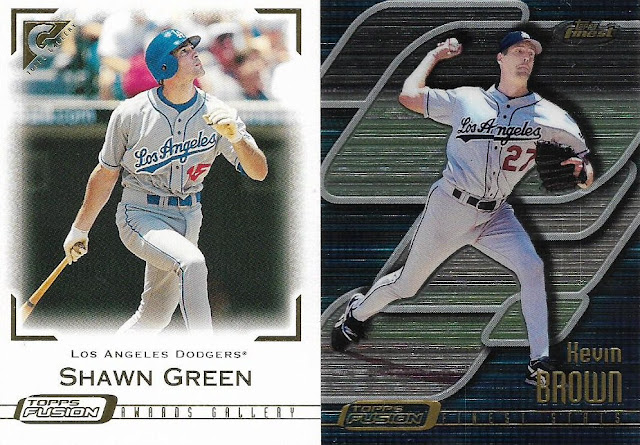 A couple of needs from 2001 Topps Fusion, one of the most confusing sets ever made. 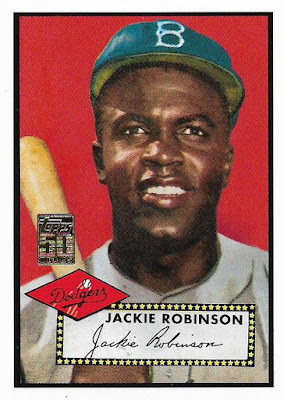 Add this to my collection of faux 1952 Jackie Robinson cards. I had to check to see if I owned this one already. 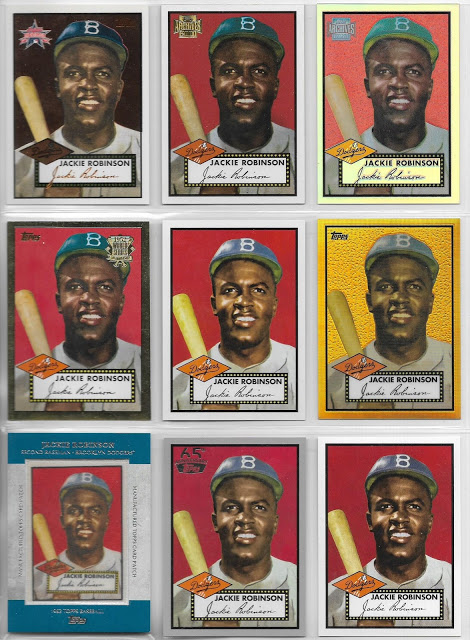 Nope! The latest '52 Jackie starts a brand new page. One of these days I'm going to get the actual version. 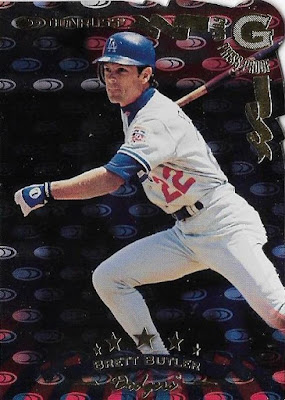 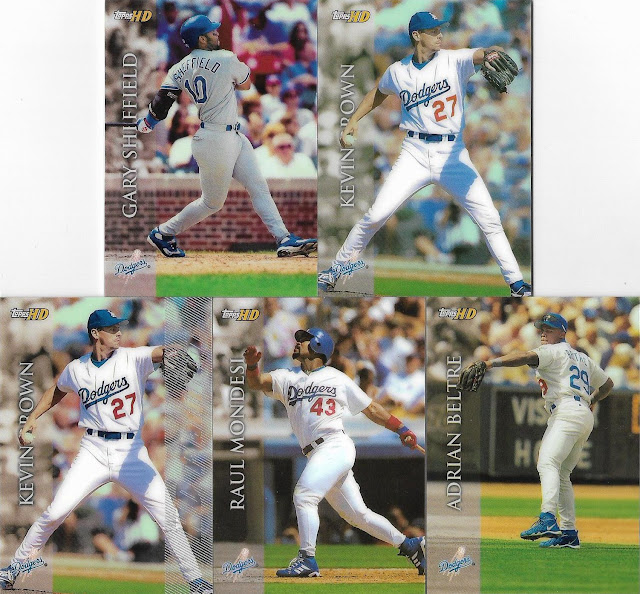 I would say the prize of the stack though was the selection of Topps HD. I've been back in collecting for over 10 years and I've never gotten my hands on a single 2000 Topps HD Dodger. Right here is the entire team set plus one of the platinum parallels (the Kevin Brown in the lower left). I'm pretty happy about this. 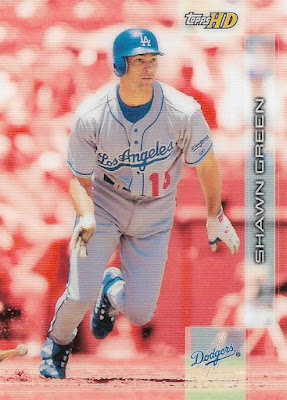 And the stack came with the lone 2001 HD card that I needed, the short-print Shawn Green. 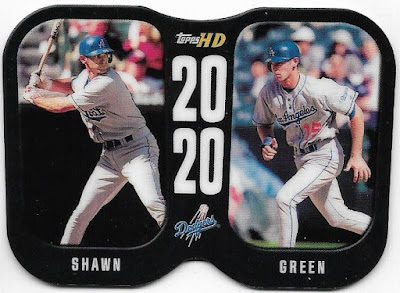 Finishing off one of the dark period team sets is a terrific rush. It means I never have to think about them again!

So out of the dark we go and back into the light. Corey also sent some more present-day Dodgers. I know all about these ones. 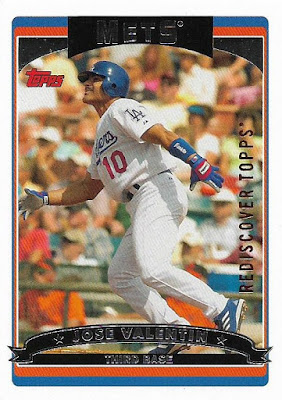 This one is pretty stupid. A stamped 2006 card. I have half a mind to throw all my buyback cards into the dupes box (except the '75s, of course). But for now I'll pretend this was a "need." 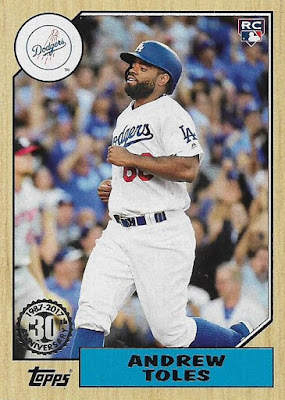 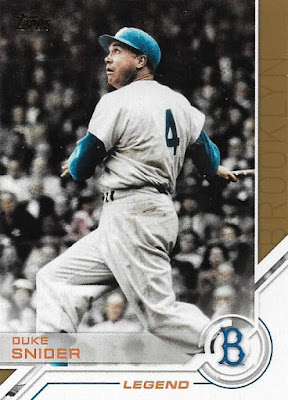 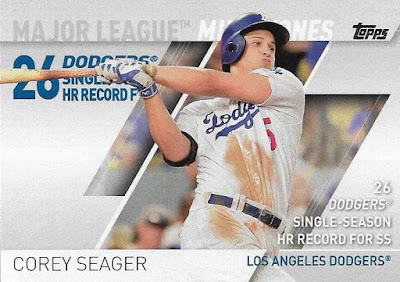 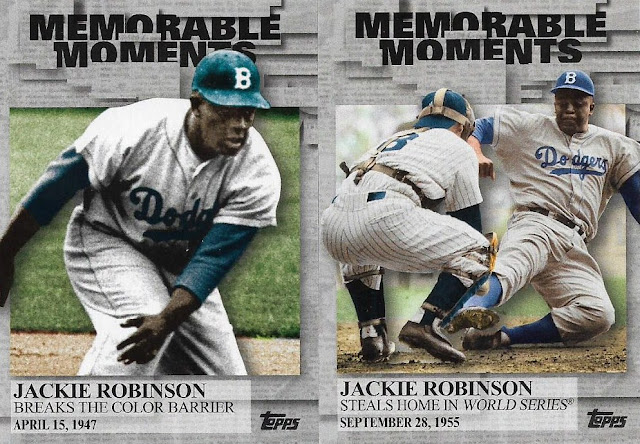 The rest were insert needs from right here in 2017. I do appreciate that Jackie Robinson steals home photo. I haven't seen that one on cards a whole lot. 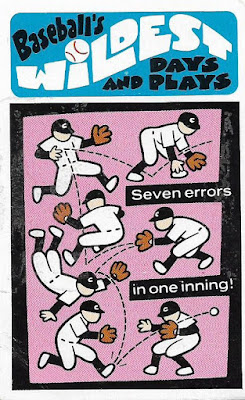 And, finally, here is a card from the 1973 Fleer Baseball's Wildest Days and Plays. This commemorates the time when the Cleveland Naps committed seven errors in an inning during a game in 1905.

This was the only card in the set that wasn't a Dodger card (except for a card of the Royals' Mike Sweeney, probably mistaken for a Dodger). But I am a lot more accepting of non-Dodgers from pre-1974.

I would call that period my "first dark period," before I even knew baseball cards existed.

Then the sun rose. And it will never set. Card collecting cannot be eclipsed.

Commishbob said…
!) I missed the whole thing, too. I was in coaches meetings.

2) I also hard a 'dark period' in my collecting. I still see cards from relatively mainstream sets that I never knew existed.

Anonymous said…
I was outside during the eclipse at a higher percentage of coverage than where you are (but not totality), and it was pretty neat but nowhere near "Must see TV". I wouldn't feel like you missed anything (and I'm guessing you don't).

Old Cards said…
I was in the totality region of the eclipse. They let us out of work long enough to view it. Even gave us glasses and fed us lunch. Brief, but fun to experience. No collecting for me during 1999-2002. Still difficult to care about any cards past 1990, but your blog somehow makes them interesting. Plus you throw in enough of the older cards to make it even more interesting. Great Drysdale card.
August 22, 2017 at 7:49 AM

Fuji said…
a. out administration team gave us glasses and let us watch the eclipse. it was pretty cool

b. i've had a few collecting eclipses over the years. probably the longest period of totality was from around 2001 to 2007.

Stack22 said…
I was hoping for at least three of those cards to be needs, so for a third to be "useful" is a good news.

Somewhere out there is some 28 year guy who considers 1997-2003 to be the golden age of baseball card collecting, knows everything there is to know, and feels completely alone in the universe.
August 22, 2017 at 9:56 AM

Bubba said…
The eclipse here in CT wasn't anything special either... just incredibly cloudy and overcast.
August 22, 2017 at 11:38 AM

Stealing Home said…
Jackie looks like he's doing that dance (Jay outside the store) from Clerks on the Breaking the Color Barrier card.