The best Dodger card for every year I've collected 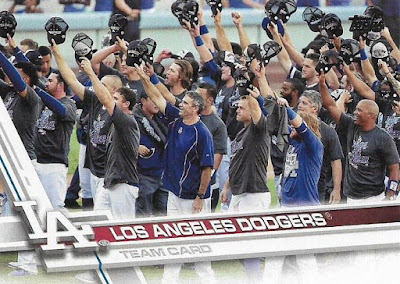 Here's a fun exercise if you don't mind scanning and cropping until your eyes bleed.

As a team collector, I have been accumulating Dodgers from the Topps flagship set each year for 42 years, with a few breaks here and there (in light of that, the post for this title should read "The best Dodger card for every year since I started collecting" -- but that isn't nearly as punchy).

Every year, whether consciously or without really thinking about it, I select my favorite Dodger card from that particular year. I figure that it's beyond past time to post each of those cards here.

This goes back to 1975, the first year I actually collected cards. And I'm limiting it to Topps flagship, both for sanity reasons and also because for the first six years that's all there was. I'm also trying to preserve history as much as I can by posting what my favorite card was back then when the set came out. No revisionist history here even though I'm sure my views have changed for some of the sets issued back when I was a kid.

OK, now for some notes and explainers for each year, if I have something.

1975: Duh.
1976: I was also particularly in love with the Andy Messersmith card from this year, but Marshall won out because the action was so tremendous I could barely stand it.
1979: The start of my rookie obsession.
1980: Cey edged out Rick Sutcliffe as rookie obsession was still very strong.
1981: More rookie obsession.
1986: Pedro Guerrero is the only player to show three times as my favorite card.
1989: Only night card in the set.
1992: Only Lasorda could make a manager card the best card of the year twice.
2000: Not a great card, but so happy Hershiser was back with the Dodgers.
2002: The period from 2000-07 is pretty awful. A lot of sameness with every card, and very difficult to pick some years. Thank goodness there was a night card this year.
2007: The worst year of all. Maddux, in a photoshopped Dodger uniform mind you, is only there because I was so thrilled to see Maddux as a Dodger.
2010: The start of the horizontal era.
2016: Puig is my favorite because it's the card that's the most effective at negating the smoke factor.

In somewhat of a coincidence, my favorite players show up the most often.

So that satisfies yet another curiosity of mine.

Feel free to do this with your own favorite team. Although if you've been collecting as long as I have, you may want to block out an afternoon.

Chris said…
The '91 Fernando and '03 Nomo are great. Anything that captures their unique wind-ups would be a keeper in my book. I have the John Tudor in my base card binders. It's one of the few '89 Topps cards I like (Bill Bene is another, mostly because it reminds me of my father in law)
August 15, 2017 at 7:53 PM

Unknown said…
Curious why you like that '82 choice. Personally my favorite Dodger card from '82 would be the Mike Scioscia card. Love the action of it. Guerrero is a cool dude & was one of my favorite Dodgers too, but, how does it beat a card with a catcher going for a ball and whipping off his mask? I'm interested to know what you see in that one that I'm not.
August 15, 2017 at 9:00 PM

night owl said…
Guerrero was a young star player who had won the World Series MVP the previous year. Topps robbed the Dodgers of getting their own World Series subset that year, so I gravitated toward that card.
August 15, 2017 at 9:14 PM

Anonymous said…
Fun stuff! That 1994 is *so* Roger McDowell that it hurts. I'm going to consider this to be a Bat-Around and do it for the Mets, but as I'd have to go back to 1974 and have little time as it is, who knows when it will see the light of day. Thank you for limiting this to Topps flagship, though.
August 15, 2017 at 9:39 PM

DMA said…
I enjoyed your list -- I only collected seriously from 1987-1994, so I hadn't seen a lot of these. I also stopped watching baseball altogether for several years after the 1994 strike. I didn't realize Orel Hershiser had such a long career. I know I have a few of these, especially the Bob Welch rookie.
August 15, 2017 at 11:28 PM

CaptKirk42 said…
Cool. sadly some of the later ones I haven't seen because I don't have the full flagship sets of much of any flagship set. 1994's McDowell made me think Samurai. Oh great now I have visions of Samurai John Belushi hacking up everything in sight. Samurai pinch hitter.
August 16, 2017 at 9:42 AM

Unknown said…
OOohh yeah, I can see that now. As much as I love the '82 set, I think I would prefer it to have a World Series subset instead of the "in action" subset. Those action shots should've just been used for regular cards. It even felt a bit weird to me as a kid that they'd have these extra cards of players just to show them in action when they could've done that in their main card anyway.
August 16, 2017 at 10:28 AM

GCA said…
Everyone has the Bob Welch. It could have made my list of cards that show up the most.

Don said…
I love the Lasorda cards. Some of the few manager cards that Topps did a good job with during that time period. For some reason I always liked the 78 Ron Cey, but can't argue with the choice of Dusty Baker.
August 16, 2017 at 12:14 PM