Missed it the first time 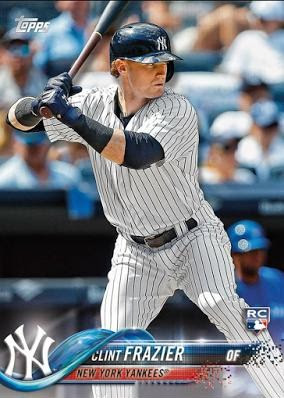 I really wish Topps would stop releasing next year's design on a day when I'm incredibly busy.

Some quick thoughts that you've probably already read before and then I'll get on with what I was supposed to be writing about today.

The above design was not a surprise. Given the previous two flagship designs and Topps' apparent desire to make the design look as digital-friendly as possible, I fully expected full-bleed with various TV graphics elements. And that's what this is.

Still, I'd rather have borders. They make an individual set distinctive and memorable. They also don't make parallels irrelevant. And they make the cards more collectible. I won't be collecting this.

Three straight years of this stuff means Topps may be challenging 1996-2000 as the least memorable era of flagship. I don't think it's there yet, but a couple more designs like these "we miss you so much early '90s Stadium Club/Ultra!" looks and 1996 Topps may not seem so bad.

On the good side, every team logo gets to go for a ride down a waterslide next year!!!!

What do you do when you receive in the mail cards that you own already?

There are a few options: throw them in the dupes box, set them aside for fellow traders, or throw a tantrum, lock the door and vow never to come out until someone gives you a card you need.

I'm happy to say I do all three (well, I've only done the third one once). I also do something else: I try to find something I missed the first time.

I recently received some cards from a reader Jonathan, who was nice enough to mention he enjoyed my blog and wanted to send some cards as thanks. He was willing to tackle my no-longer-complete want list, which means he couldn't have possibly have known what I need other than "Dodgers". 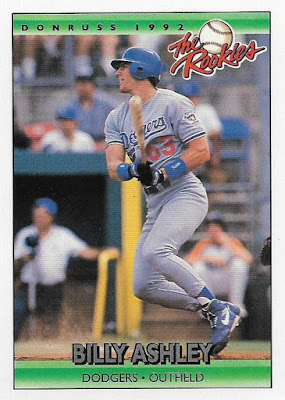 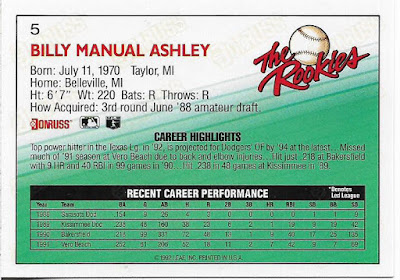 Billy Ashley's middle name is "Manuel". I totally missed that the first time. I think if his name was Manny Ashley, he may have enjoyed a more successful career. 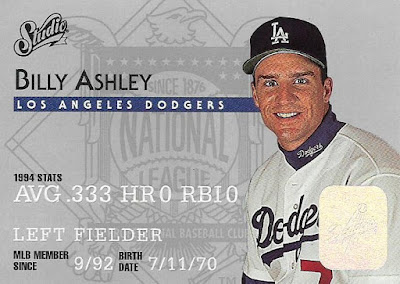 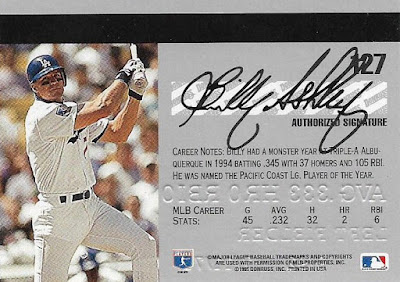 More Ashley fun. I've always liked these Studio cards from 1995 for how much they replicate credit cards from that time, right down to the black strip on the back. But somehow I totally missed the signed name, similar to how you'd sign on that blank strip on the back of your credit card. How did I miss something that obvious? I don't know. Good thing I got another one of these cards, huh? 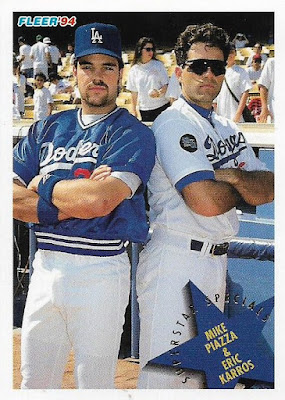 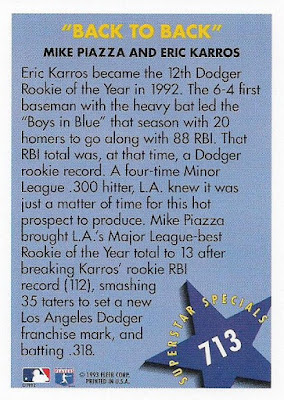 I totally missed the first time that this card uses the highly-overlooked technical term of "taters" for home runs. I think "taters" needs to come back right now. And please, for all that is good and baseball, have it replace "dongs." Taters forever. 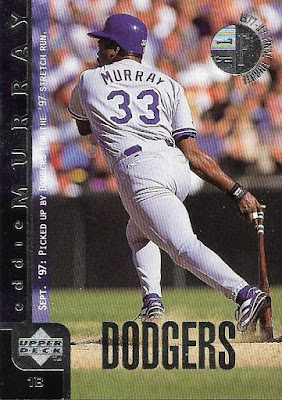 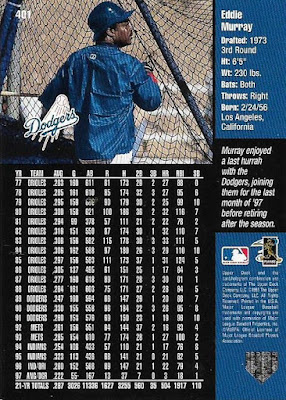 I completely missed the first time that Eddie Murray is wearing an Angels helmet and pullover on the back of his card. This may be a final tribute to Murray, who ended his career in a Dodger uniform, but Upper Deck couldn't quite get it right.

All right, by now you're asking -- Jonathan in particular -- weren't there any cards that you needed? 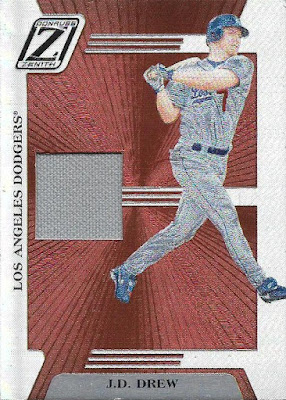 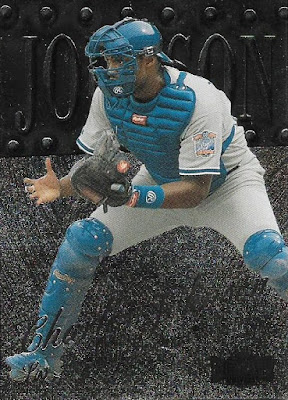 A Charles Johnson Metal card so I can remember again his miserable time with the Dodgers. 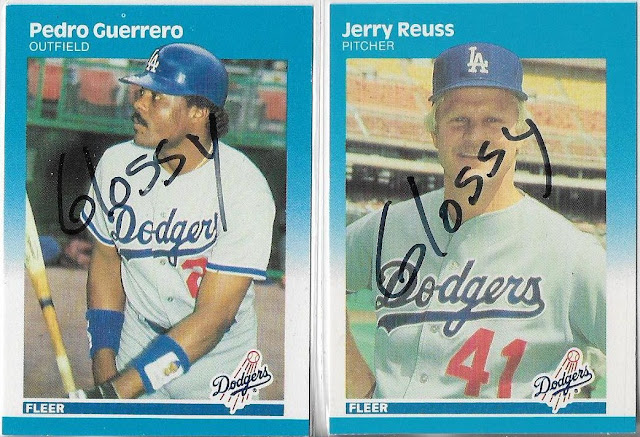 Two 1987 Fleer glossy cards and I'm so glad that "glossy" was noted on the penny sleeve. I'm quite sure I have glossy parallels sitting in the giant dupes box. 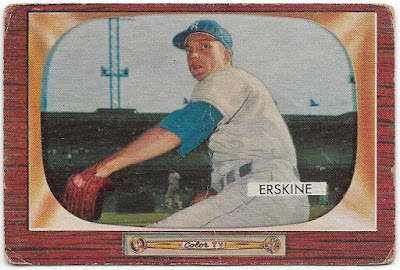 A 1955 Bowman Carl Erskine, which is likely in much better shape than my version, even with the scribble on the back. 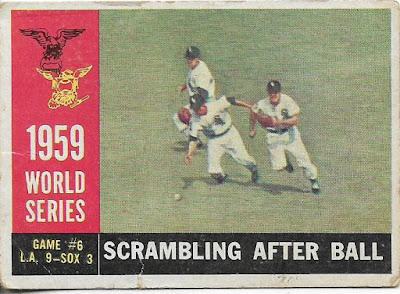 Another "Scrambling After Ball" card just because I can't get enough of these. 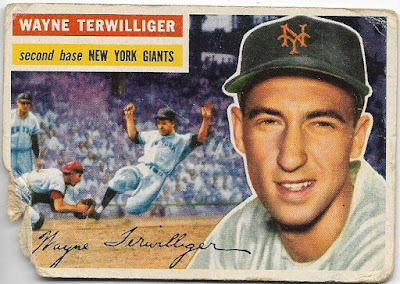 A '56 Wayne Terwilliger card that apparently is very tasty. 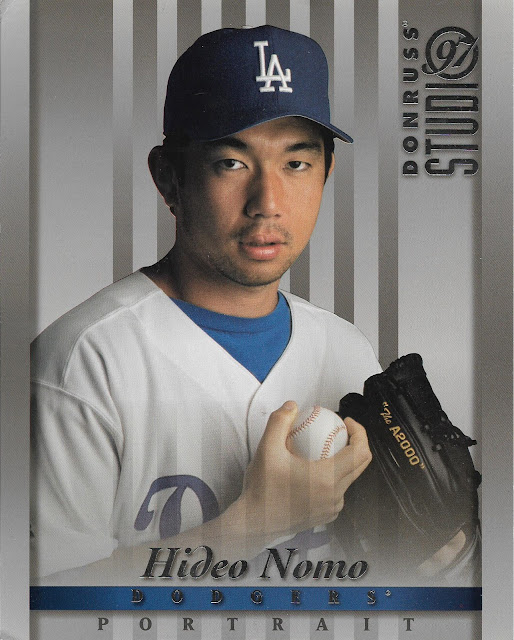 And this monster-sized Donruss Studio Hideo Nomo item that will challenge my "full-sized page" inventory.

One thing's for sure about this card: it's definitely not to be missed.

Peter K Steinberg said…
The Nationals use taters all the time for their home runs -- you should follow them instead of the Dodgers. (I realize you may now block me). They also server delicious tater tots at Nationals Park. I eat them with mustard and get weird looks. But they are super tasty with it.
August 3, 2017 at 8:13 PM

Henry Blanchette said…
The 2018 set is an improvement over 2016 and 2017, however the drifting pixels baffle me. It makes the card seem unfinished and despite not even buying this set yet I already am very irritated by them. I will say that I like other parts like the wave and the picture quality is very good as usual.
August 3, 2017 at 8:33 PM

Sascards67 said…
Topps doesn't care about us long time collector's that would welcome borders because we buy the Archives and Heritage sets.
August 3, 2017 at 8:42 PM

John Bateman said…
That not a slide but Mick Jagger's Tongue

ketchupman36 said…
You make a good point that this design does no favors for parallels. Damn near makes them extinct
August 4, 2017 at 12:50 AM

Brett Alan said…
The parallels would all have the player and team names in various stages of destruction. In some the can be washed away by the wave, and in others the tails could just have frayed further. "I have the team name broken up parallel, but not the team dame drowning parallel." Good times.
August 4, 2017 at 6:16 AM

Michael Ott said…
Maybe your other Ashley has his middle name spelled "Manuel". I'm not sure I've ever met a Manual (except the one with instructions for programming the VCR).
August 4, 2017 at 6:38 AM