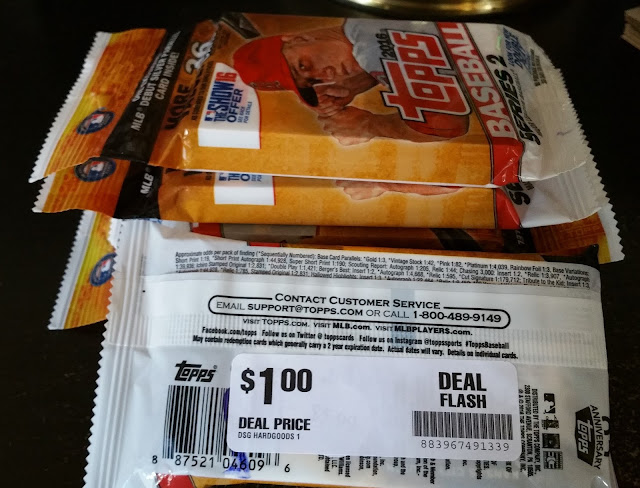 The Kmart in my town is closing.

This was a long time coming. Kmarts all over the country have closed or been in disrepair for years. My Kmart, while almost completely empty just about every day, kept itself up and was worth visiting just to get away from the atrocity ... er, mass of humanity at Walmart and sometimes Target.

It had also recently emerged as a baseball card option. So I'm going to miss that, too.

When I saw some of those poor souls displaying signs proclaiming "up to 75% off!" by the side of the very busy road the other day, I knew I had to visit Kmart one last time, if only to see if there were any baseball cards discounted.

As I walked in, I saw several bins containing a variety of unrelated small items. I spied some 2016 Topps sticker books immediately. I rummaged around a bit more in the nearby bin and spotted several 36-card fat packs of 2016 Topps, Series 2. Each one was a buck.

That is too good of a deal to pass up. And that's how someone who had sworn off buying any smoke-filled 2016 Topps more than a year ago, ended up with five fat packs of the stuff. Come on! That's 180 cards for 5 dollars! That's less than 3 cents a card!

I didn't expect to find much in those packs and I was right.

The collation was horrible. In two particular fat packs, I received 28 of the same card. Here is a look at the similarity between the two packs: 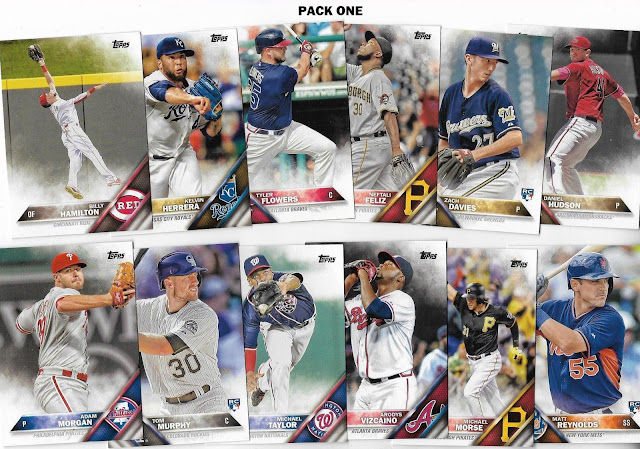 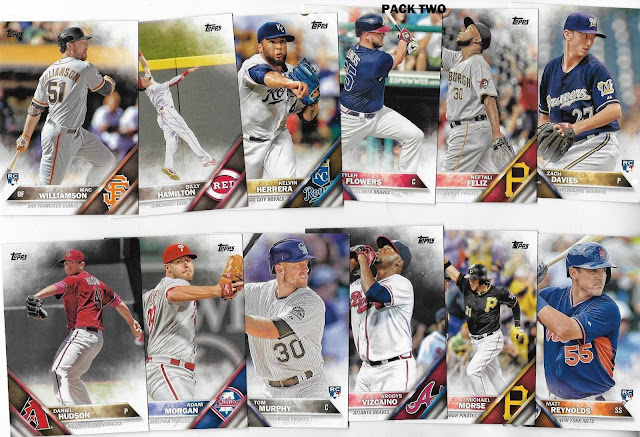 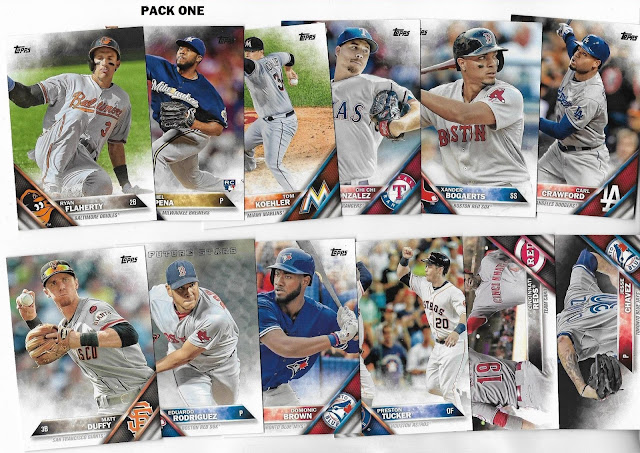 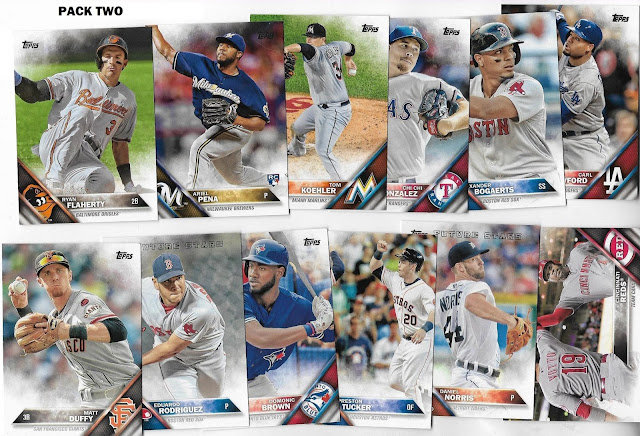 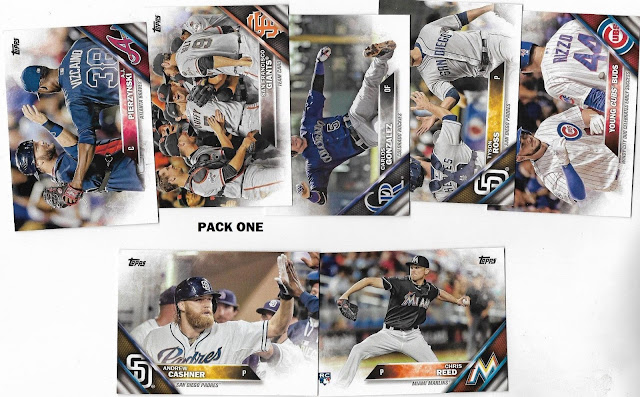 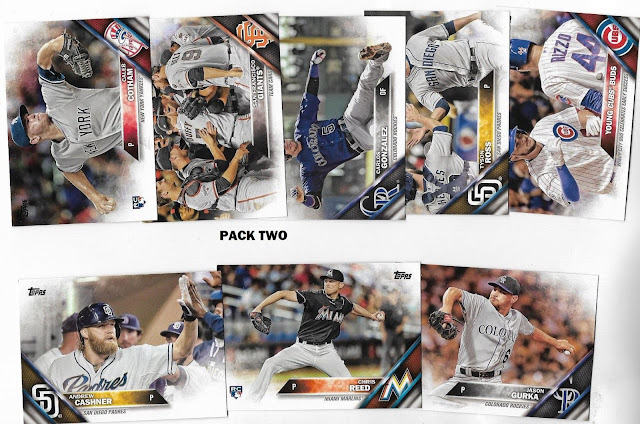 Out of those two separate runs of cards there were just eight unique cards. And one of those unique cards I pulled in another pack.

Because there were other doubles, too. 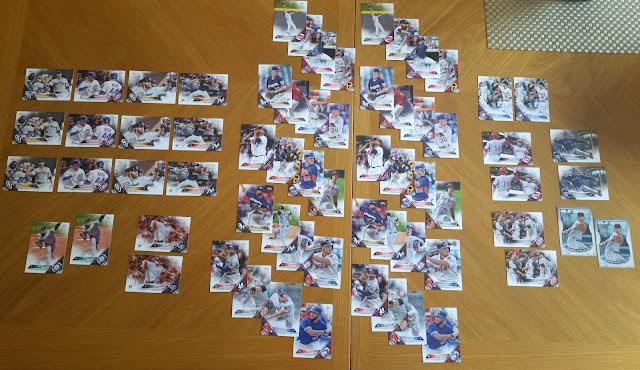 I don't know how well this shows up even if you click on the image, but that's a look at all of the duplicates I pulled.

This is of no surprise to anyone. Collation is terrible and it's Topps' way of making you spend more money in order to complete a set -- you few remaining saps who want to complete sets by buying packs.

Not even the inserts/parallels, which were the rational for me buying even deeply discounted cards from a set that is among my very least favorite flagship sets that Topps has ever issued, were of interest to me. The gold parallels are no longer worth showing and the inserts were pretty boring in 2016 Topps, too.

All of this made me sorry I ever paid full price for any of this. At least I came to my senses pretty early in '16 and shut down the pocket book.

Yup, less than 3 cents a card is just the right amount to pay for this stuff.

But I did get a blender for 30 percent off.

Kmart has been part of my card collecting journey since at least 1982 when they issued that MVP boxed set and oh, how I wanted that thing. Kmart was a force as far as cards went throughout the 1980s. And Kmart was where I first spotted Topps' 2004 All-Time Fan Favorites set when I was first starting to come back to cards.

Peter K Steinberg said…
I spent a small fortune for series 1 of 2016 and was really disappointed with the collation and return on my investment so for series 2 I bought a hobby box and was much happier. Even with getting autos and relics, though, it simply isn't worth it, to my mind, to go out in search of making a set unless you truly have disposable income. Otherwise, it makes more sense to wait until July and just buy a factory set for $50 or $60. Not that you asked! Sorry to take up comment space. I'm happy to hear about the blender, though... I have some 2016 Trayce Thompson's you can chuck in there...
August 2, 2017 at 8:00 PM

Fuji said…
When I hear Kmart, those MVP boxed sets are the first thing that come to mind. I've always wondered how many of those sets they actually produced. They were the "Junk Wax" version of boxed sets. Okay... enough negativity. Nice find. I'd buy those packs for a $1 all day/every day.
August 2, 2017 at 9:24 PM

Billy Kingsley said…
We lost our kmart last year. Really stinks as I had a lot of great memories from there...and it's where I got most of my clothes and Christmas lights. Our local store hadn't had many cards lately, but the first boxes of both NBA and NASCAR that I ever opened came from there.
August 3, 2017 at 5:45 AM

Captain Honkass said…
There is a still open Kmart a few blocks from where I live. In years past, they were great for cards. not as much these days... I keep expecting it to close, like all the others around Denver, but it always avoided the closure list...

Bo said…
The K-Mart in Penn Station has packs of cards that have been sitting there for years. There are even still 2008 Phillies World Champion boxes. They are building a Target a block away which I imagine will kill this K-Mart, maybe be able to get some cheap cards when it goes out of business.
August 3, 2017 at 9:44 AM

Jongudmund said…
I bought a box of Topps 2007 at a K-Mart in Brooklyn on one of my visits to the US. The box came with some limited edition cards. (Limited to their boxes; probably not worth anything) Sad to hear the chain is going. It was second to Target in my list of favourite 'big' stores and above Walmart.
August 3, 2017 at 4:27 PM

Jafronius said…
When the K-Marts around me closed, they were out of cards by the time I got over there to see if there were any left. Despite the bad collation I would have bought all 5 for that price as well.
August 3, 2017 at 6:03 PM

carlsonjok said…
I don't think KMart could have ever successfully competed against Walmart and Target. But, boy howdy, that merger with Sears was a disaster. Eddie Lampert has destroyed that company.
August 5, 2017 at 6:22 PM