I'm not in the habit of saying "dude" in conversation, unless I'm discussing "some random dude".

I'm told that "dude" has been a regular part of the language among young people since the 1950s. I came across it, like many did, in the 1980s. While younger people will cite "Dude, Where's My Car" and "Bill & Ted's Excellent Adventure," as well as "The Big Lebowski," my first "dude" association is Jeff Spicoli from "Fast Times at Ridgemont High."

I think I heard "dude" so much around 1982 that I officially became sick of the word back then.

Calling each other "dude" has since become rampant. People like my daughter's best friend use it often and for everything. There is even a wikihow page that gives tips on how to stop saying "dude". (One of its items of advice: "move to another country.")

But "dude" as a greeting or exclamation isn't all that bad when you consider the alternatives, like "bro". And there is still humor in the word "dude" if used correctly.

The 2017 A&G set features a 40-card mini set called "The World's Dudes". This is a tribute to 1888 Allen & Ginter that featured a 50-card set also called "The World's Dudes," which just goes to show you how long "dude" has been in use. I didn't realize when I was first pulling the 2017 minis that there was a previous version of this set, so now what I once viewed as totally out of the blue and quirky, actually makes sense. Still quirky though.

I still love them though and am looking to acquire as many as I can. I don't want to step on Nachos Grande's toes as I know he's also trying to complete the set. I'll merely take any of NG's leftovers.

In the meantime, I received a smattering of dudes from Justin of The Hopeful Chase. It's been awhile since we've exchanged cards. 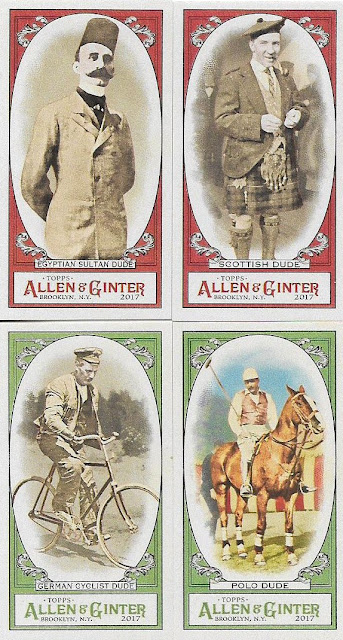 I love the variation of color, too. All of the facets combine for my favorite mini insert set in this year's A&G. It's a pretty good year for mini inserts in A&G. If you're searching for my rankings, and I know you are, here they is:

I've been quite successful in pulling dudes cards, since there are so many, and also done well with the Bust a Move cards. Unfortunately, I haven't pulled a single Required Reading mini. I am sad about that.

So let's look at all the Dude mini cards I've accumulated so far! 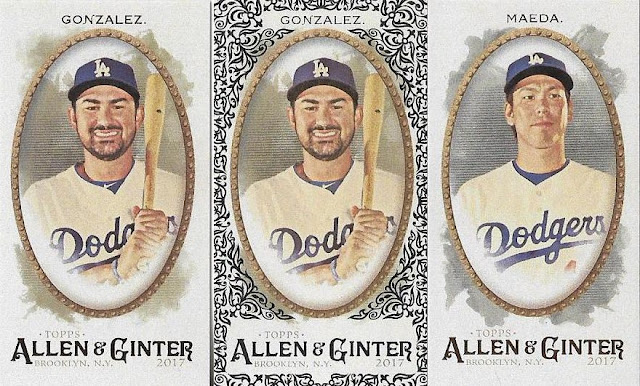 Besides, baseball players are just dudes anyway. They're a subset of the dude category. And that is most stellar.

Throw in the fact that I hear women call each other "dude" all the time and A&G is an entire set of dudes.

Nachos Grande said…
I have a few dude cards available, let me know if you need any of them: http://fanofreds.blogspot.com/2017/07/for-trade-2017-topps-allen-ginter.html

Jongudmund said…
TBH Allen & Ginter leaves me a bit cold. I think it's trying to hard to be quirky, a bit like when someone says "I'm a bit crazy!" when actually they're just annoying. Over the years there have been some genuinely quirky sets or individual cards. A&G's manufactured quirkiness has less appeal to me.
August 12, 2017 at 9:00 AM