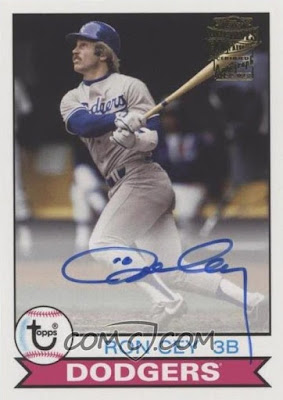 When Topps Archives was released a few months ago, I noted a Fan Favorites autograph of Ron Cey included in the checklist with mild interest.

Collecting autographs is not why I'm in this hobby, but I do have just a few signatures from my all-time favorite player and it was nice to see a new photo of him on a familiar design.

Still, this new card was way down on the priority list.

As soon as it started appearing online, fellow collectors started alerting me to the card. Have you seen this? Check this out!

Yeah, I've seen it. Not really feeling it though.

Maybe I had reached my quota of Penguin autographs. 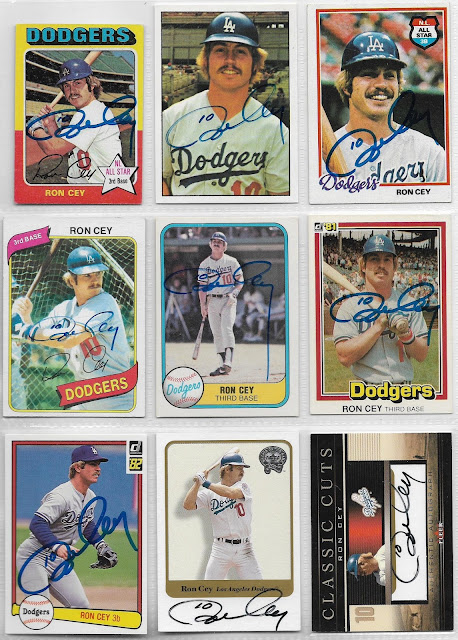 They fill up a whole page. 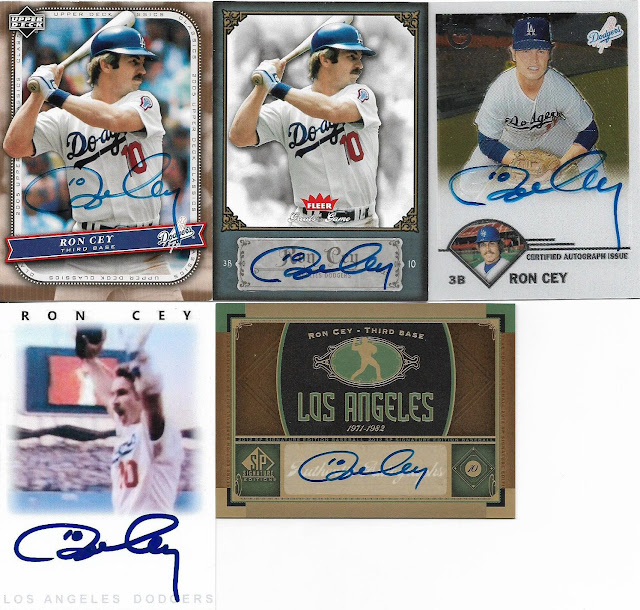 And then some. I even have a couple more that aren't easily scannable.

Unlike regular, unsigned cards, I think of signed cards as having a limit. Signed cards are supposed to be somewhat exclusive, right? "My favorite player signed THIS card." The thought of having 50 signed Ron Cey cards kind of diminishes that.

It is the Penguin.

When I sold the Gene Hackman autographed Allen & Ginter card, most of the cash went into the savings. But I reserved just a fraction to finally get that Archives autographed Cey. The other half of me felt stupid ignoring a new card of my favorite player.

As you know, Archives isn't happy with issuing just one version of its Fan Favorites autographs. It has to issue colored border parallels. Again, this seems pointless on an autographed card, but my view was overruled by my love of colored parallels.

I was wandering through ebay and surprised to see that one of the kinds of colored parallels was available for a cheaper price than the regular base autograph. I snapped it up quickly. 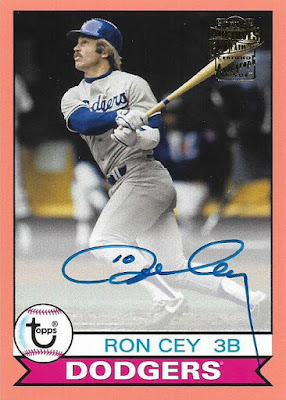 Here is Ron Cey autograph No. 17 in my collection. The peach parallel, which is numbered to 150.

I actually like this parallel better than the two rarer versions. The light blue parallel is weak, unless it's shown with someone wearing a 1980s powder blue road uniform. The red parallel is a bit overpowering for a card meant to display an autograph.

The peach is just right, and kind of unusual. And makes me want some peach ice cream.

However, the color, in person, looks more like pink or salmon. I'm available to properly name colors, Topps, for a small, very reasonable fee.

The inevitable question now, probably from people who alerted me to the Cey autograph in the first place, is will I go for the "base" autograph and the other parallels?

Probably not. If I find the base version cheaply, I'll add that. The others I can ignore easily. 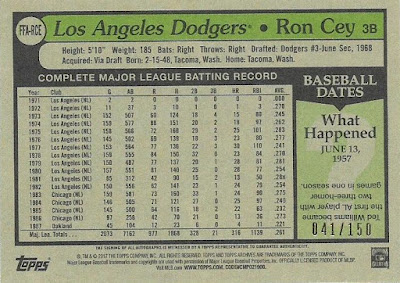 Here is the back, since no one shows the back.

I am extremely familiar with the 1979 Topps card backs and it's very weird to see references to Cey's Cubs and A's days on this card. It is exceedingly jarring that Topps list the city name (with that annoying "NL") instead of the team nickname as was used in '79.

It's nice to see Cey remembered in cards in year 2017. It's been three or four years since he has appeared and it's been more than a decade since he's been featured in a new Topps card.

Maybe we can get him into Stadium Club now.

Hackenbush said…
It doesn't hurt that he was a Cub but as far as Dodgers of his era goes the Penguin has to be my favorite. Mostly (if not all) on card signatures I see.
August 22, 2017 at 9:05 PM

BobWalkthePlank said…
You were good to wait a bit to make your purchase. Fan Favorite autos always overpriced at release time. The two Pirates this year (John Smiley and Tony Pena) can be had for under $5.

While I don't collect one certain player I'm very guilty of accumulating tons of autos of the same player. Sometimes it just happens organically via blog trades while other times I just get obsessed on finding some rare gems for players like Jason Bay.
August 23, 2017 at 9:59 AM

JediJeff said…
While that might have been used in the '79 set, it was not the trivia question on Penguin's card: