August 20, 2017
(Greetings on the last week of relative freedom in the workplace. After this week, it's the steady drumbeat of school sports until the end of June. And to think I thought I was done with this when I graduated from high school. Time for Cardboard Appreciation! This is the 261st in a series): 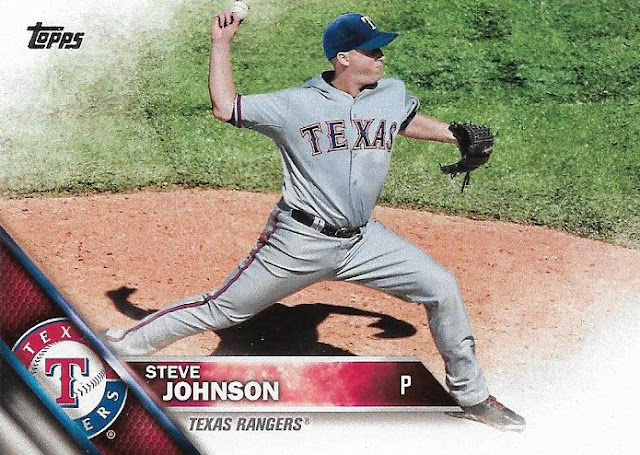 This card is a piece of work.

For starters, I'll bet Johnny could peg the shape of this shadow in his sleep. A Tyrannosaurus rex or a beetle maybe (sorry, I'm not very good at it).

But there's something even more interesting than that.

Steve Johnson is shown pitching for the Texas Rangers. And that is a boldfaced lie.

Take a look at the transactions:

He was released in spring training a month after he was signed. Three days later, the Mariners signed him. Yet, there he is in Series 2, pitching for the Texas Rangers. 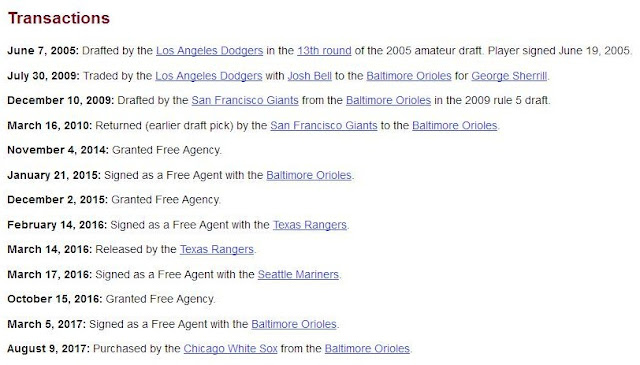 That's a lot of packing and unpacking, huh?

This brings me to what I found interesting about the card in the first place.

When I was tallying this card in my "database," if you want to call it that, I assumed this was Johnson's first card. But when I got to "Steve Johnson," there were some cards listed there already ... from 2005. 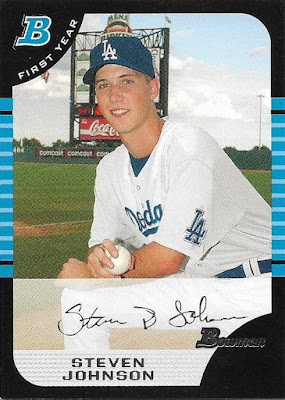 There he is. Johnson was signed as a Dodger.

I actually have three versions of this card because, of course.

I turned over the Texas Rangers Johnson card to double check, and I was hit with this: 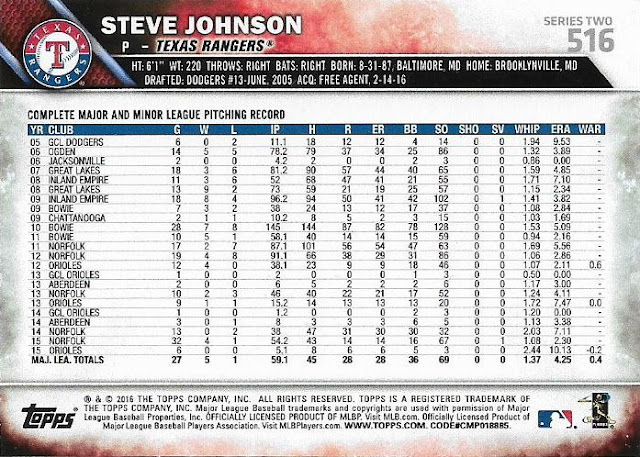 Wow, that's a lot of talking on the phone.

The back confirms it that this Johnson and the Bowman Johnson are one and the same. You can see Johnson was drafted by the Dodgers and started for the Dodgers' Gulf Coast League team in 2005.

It struck me how many years had passed between the time of the first card that I have of him and the most recent card I have of him. Eleven years.

But the answer is: "no, not really." He has a few minor league issues.

That 11-year gap between cards from one single player is probably the biggest in my collection. It's only two years shorter than Minnie Minoso! (Minoso appeared in the 1964 Topps set and then again in the 1977 set when he pinch-hit at the age of 50).

Johnson, who is the son of former Orioles pitcher Dave Johnson -- who won 13 games for Baltimore in 1990 -- is still at it. He was acquired by the White Sox from the Orioles a couple weeks ago and pitches in Triple A (Dad and son, collectively, spent two decades in the minors).

I'm kind of hoping Steve Johnson returns to the majors so he can get a Topps card in his correct uniform.

Because if he does, it will be his first.

After at least a dozen years of waiting.

Commishbob said…
That cardback is one for the ages. Looks like he was Orioles property on four separate occasions. And he's one of the guys they O's got when they traded George Sherrill aka Flat Breezy to the Dodgers. Sherrill's brief time as a stud closer for Baltimore more or less marks my return to being a baseball fan.
August 20, 2017 at 8:00 PM

CaptKirk42 said…
Odd. So Topps airbrush (oh excuse me photoshop now) "artists" worked on Mr. Johnson's card during mid Feb to mid Mar. And their trivia folks had no time from Mar 17 to printing time to even note "Now with Mariners"?
August 20, 2017 at 9:24 PM

Jongudmund said…
Could it be a picture from Spring Training? Would he wear the uniform then?
August 21, 2017 at 9:34 AM