It's a wonder any cards end up in our collections

August 18, 2017
Earlier today, The Lost Collector posted about a card package sent to his old address that somehow made it to his new address three months later.

I happened to send that package. Sorry about the wrong address, I just can't keep up.

It's interesting that the cards did end up making it to him anyway and underlines the chaos that's going on in our lives -- or at least my life -- as we have the audacity to try to send cards to people and the gall to actually believe that they're going to end up in those people's collections while the world is swirling and spitting at us 24 hours a day.

So I have my own "the cards almost didn't make it" story.

A week ago, I posted about some cards that Justin of The Hopeful Chase sent me. A bunch of minis, mostly Dude minis.

That -- I thought -- was that. I gathered up those cards, put them in the "to be cataloged" stack on my desk and threw the mailer into the recycling bin. There the envelope sat for days and days as other stuff was piled on top of it.

Then, the day before garbage day I tended to the recycling bin. It was overloaded as my wife cleaned a bunch of stuff out of the garage. I couldn't get everything into the bin so I was taking some items out when a few papers fell out, including Justin's envelope.

I picked it up to put it back in the bin and, gosh, it sure seemed heavier than a normal empty mailer.

I poked around on the envelope. Yeah, I think there's something in there!

I reached in and wedged at the very back was a toploader with four other cards in it. They were hours away from being recycled! 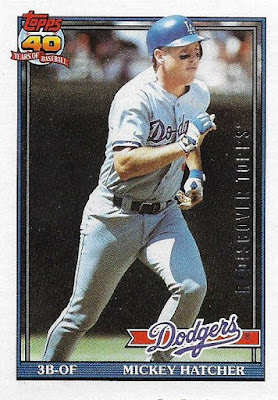 OK, this probably should have been destined for the garbage truck. Not once has anyone wished they could have a 1991 Topps card with a random stamp on it. Everyone who has needed to discover 1991 Topps has discovered it. 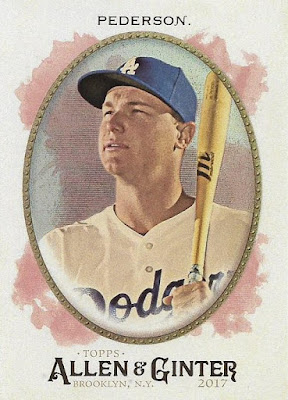 An Allen & Ginter team need. Joc Pederson does just enough to avoid getting sent down. (EDIT: Pederson sent down the very day after I wrote this. My timing is impeccable). 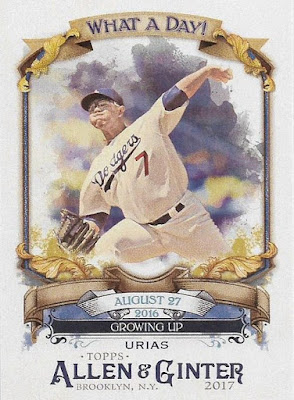 More A&G goodies. For a second I thought this card was celebrating his first start -- like the Topps Now card -- in which he did not do well. Fortunately, A&G is a little more reasonable. 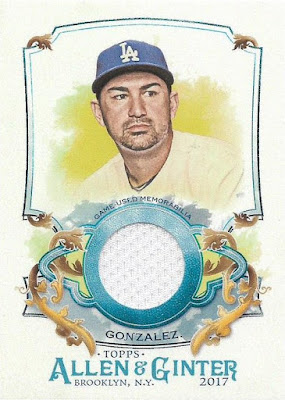 And a relic. I almost threw a relic of Adrian Gonzalez in the garbage.

Honestly, I have no time for this hobby.

Perhaps some of you remember a time when new items were created and advertised proudly as time-savers. This was the big selling point. This device, that piece of technology was going to save you time. Life would be easier.

We now know that is a joke. The biggest time savers turned out to be enormous time sucks.

I'm working on that. I'm slowly backing away from Facebook. In a year or so, both of my set blogs will be finished and I have no intention on starting another one. That will open up at least a little more time for me.

I mean this was the red flag: when I'm throwing out cards that I actually want, it's time to take action.

Commishbob said…
I learned my lesson the hard way. I threw away a gold coin that came with a presidential set I bought. And now I'm beginning to think that the first copy of my final 1970 card, the Pilots team card, was tossed with the "empty" bubble mailer last week.
August 20, 2017 at 11:54 AM