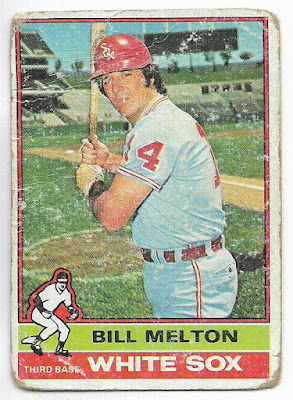 As a kid, I was aware of the perfection of a baseball card out of a pack. I rarely intentionally defaced a card. Rarely drew on one, rarely wrote on one. No pen marks at all, unless I was checking boxes that were meant to be checked. Why would I alter something that looked so fantastic already?

But I was not all that aware of the vulnerability of a baseball card. So even though pen rarely met card, wall met card, floor met card, rubber band after rubber band met card. I flipped them, stuffed them, scooted them, stacked them, without the slightest idea that corners were disappearing and creases were appearing.

There was really only one enemy of my baseball cards back then.

I avoided all water when holding or storing my baseball cards. I thought nothing of taking cards to school, and sitting down on the sidewalk on the way to school to look at them. But there would be none of that if there were puddles. And definitely not if it was raining.

Baseball cards never appeared in the kitchen (not that my mother would allow it) or the bathroom. I wanted my collection dry as a bone.

Then, one day, one of my cards got wet.

It was the 1976 Bill Melton card here. This very one. I had left the card in the pocket of my jeans, a perfectly logical place to store cards. And, like so many of my other valuables stored in that very logical place, that card ended up going through the washer and the dryer. 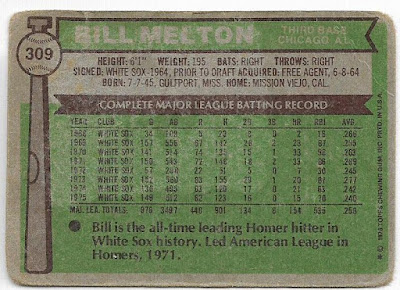 I am sure that this wasn't the only card that saw the inside of the washer. But I remember being horrified by the new appearance of the Melton card. Scuffing and creases I could handle. But water damage? It weirded me out a little.

But as the years progressed, Melton became one of the stars of my childhood collection.

Like I said, I know I had other cards go through the wash. Those cards never made it out in one piece. They emerged out of the pocket in 4 or 5 different scraps, something that even tape couldn't save.

This Melton card was bad-ass. It went through a 1970s washer cycle, then twirled around on blast in the dryer and still resembled its 2 1/2-by-3 1/2 dimensions, protected by that Toughskins pocket.

A couple of years ago, I sent off a bunch of 1976 and 1977 Topps cards from childhood to the writer of the Playing With My Cards blog. I had upgraded most of those cards long ago, and as far as childhood collecting memories are concerned, the 1975 Topps originals take care of 90 percent of that. I didn't need the others hanging around anymore.

But I saved a handful that still meant too much for myself. A '76 Ken Reitz, too cool to this day. A '76 Vic Correll, which set what was then a record for most creases on a card. A '76 Don Baylor, scuffed beyond recognition but still recognizable.

And the Melton card.

He had conquered the enemy.

Big Tone said…
Wow,looking at the back of his card,Melton was a bruiser.Never heard of him but It looks like he was quite the home-run hitter.
August 29, 2016 at 7:59 AM

Douglas said…
I don't know if anyone wrote about or researched this, but the American League had a massive drop in home runs in 1971 vs. 1970. In 1971 year typical leaders were having off years or eventual career ending decline. Melton benefits from this by having consecutive 33 home run seasons. That figure was good enough 6th in 1970 and #1 in 1971. To bad it was short lived, he got injured the next year and while he did come back he never put up those numbers again.
August 29, 2016 at 12:08 PM

Stack22 said…
If there was ever a card to send off to be stabbed (which I'm very much against), that would be it.