So I can't just ignore this

I went out shopping for a Generation Z eater yesterday.

If you have kids in the house, you might know what that means. I don't think we have a full handle on the "Generation Z" generation yet, but I believe when it all shakes out, one of its main defining characteristics -- other than their insistence on using social media and technology that no one over the age of 25 uses -- is their habit of binging on everything.

Show-binging is the most famous one. My daughter does that. But she also "binges" on types of food. This has nothing to do with any kind of eating disorder. She simply decides she likes a certain snack food a lot, must have it, then eats it for like six months, and then never wants it again.

I was setting out to get one of those must-have snacks, when I realized I needed a few other items. I didn't have the energy to go to multiple stores, and I knew that Walmart would have everything I needed, so I dutifully drove to Walmart. So I could binge shop.

I decided to head over to the card aisle and pick up a small something, a rack pack of Allen & Ginter or Stadium Club or something else that just came out -- when, BAM, I was struck in the face by about 10 rack packs of 2016 Chrome, and beneath that about eight blasters of the same stuff.

Didn't Topps just release Archives? Aren't people full-force into A&G? Aren't they buying Olympic cards? I've bought exactly one blaster of A&G and one of Stadium Club. It's all I've had time to buy. Who has time for something even newer?

But I couldn't ignore it.

You know me and chrome.

Yes, I know you don't care for it because it's the same cards that just came out.

Yes, I know you're not buying a pack that contains four cards.

Yes, this is the same design I disliked so much eight months ago.

But did you look at who was on the pack? 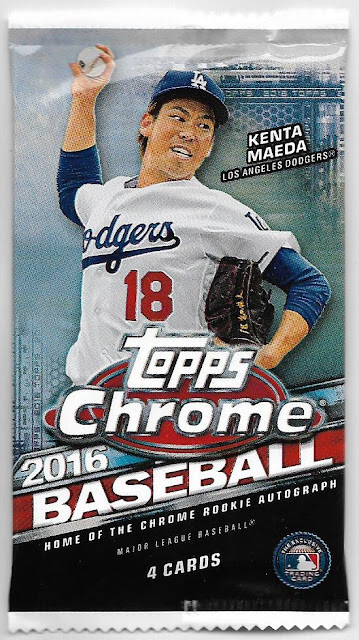 None of the above matters. I just can't ignore a pack with Kenta Maeda on it!

I momentarily considered a blaster, then smartly grabbed one 3-pack rack pack with five Pepto-Bismol parallels. 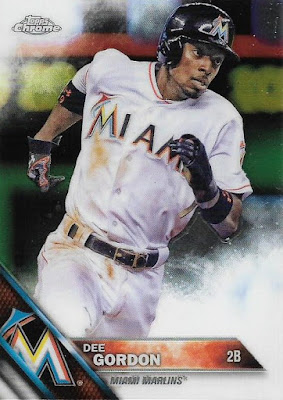 Now that Gordon's off the Dodgers, I pull all of his cards. 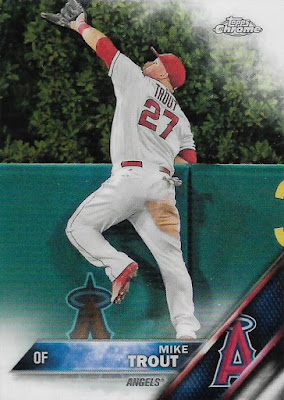 I just put a handful of Trout cards I have in top-loaders. Gotta pre-tect the investment! 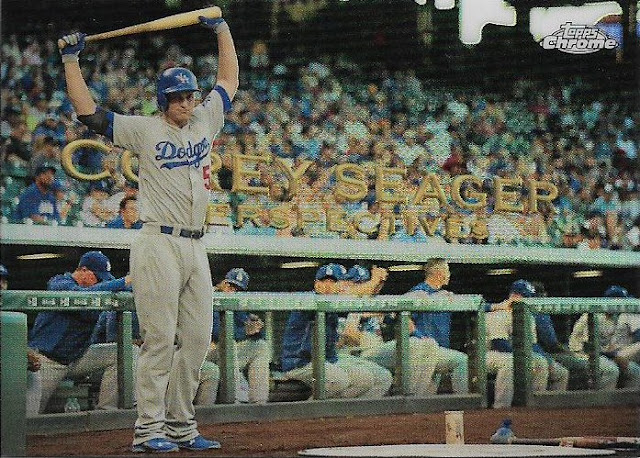 Perspectives has apparently joined Chrome, too, and they've added Corey Seager, because, of course.

This is the card that justifies everything I did in Walmart last night, even that thing about switching self-checkout registers in mid-transaction, throwing the overseer employee into a tizzy. 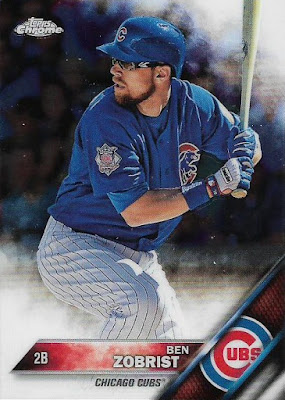 This is a different photo than what appears on Zobrist's card in flagship. This is an actual, unphotoshopped Cubs uni, I believe. 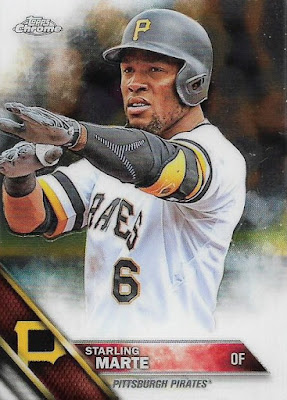 As you can tell, the smoke is back. It's not as obvious on the chrome cards in-hand. But on the scan, Marte is pointing the way to the nearest exit. Cover your nose and proceed in an orderly manner. 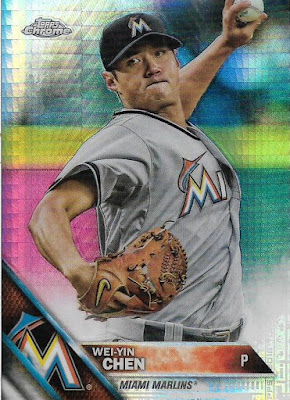 I'm sure this card will never leave the house. Can't there be someone who's trying to complete an all-prism set? 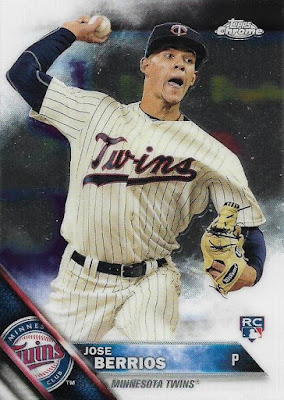 Guy who has appeared in Bowman and Pro Debut this year. So, no idea. One of these days I will have more cards in my collection of players I don't know than players I do. 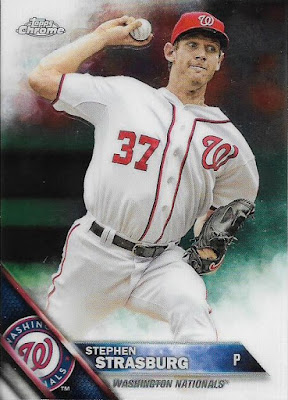 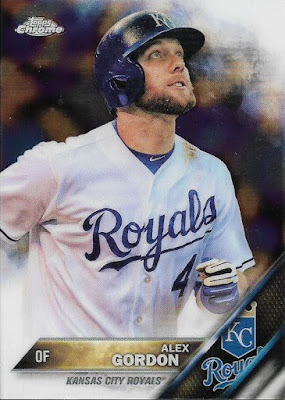 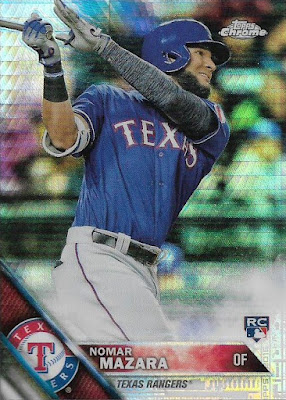 Lot better than that Marlins pull. 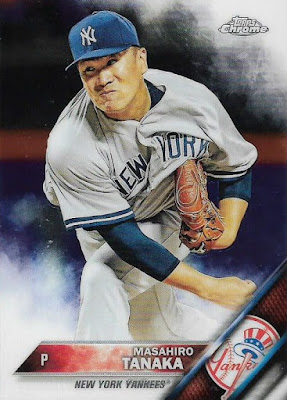 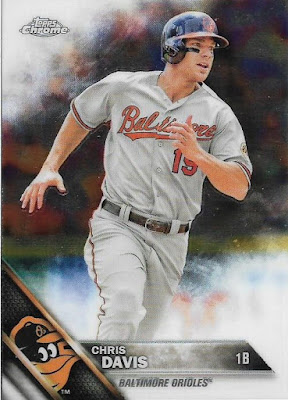 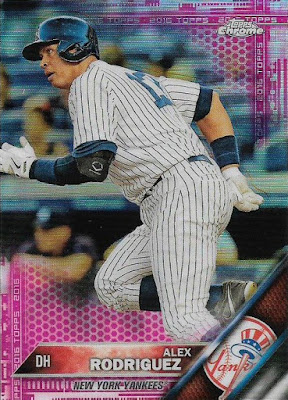 Soon-to-be-Yankee instructor. I'm very happy I won't have to see A-Rod on a field anymore, but nothing would make me respect him more than ditching the Yankees, signing with the Indians and winning a World Series. Hal Steinbrenner might turn into George on the spot if that happened. 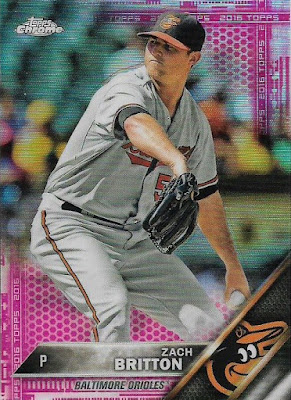 I pull a lot of Orioles. 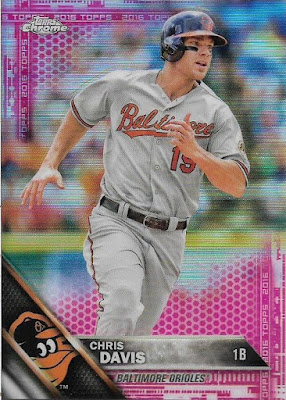 A lot of Orioles. 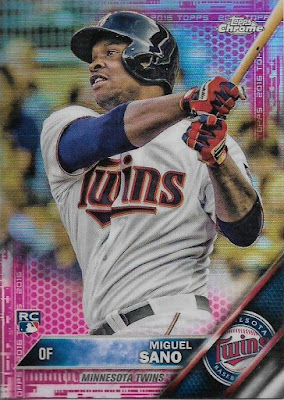 Nothing to say, so I'll just add that I still smell my chrome cards. 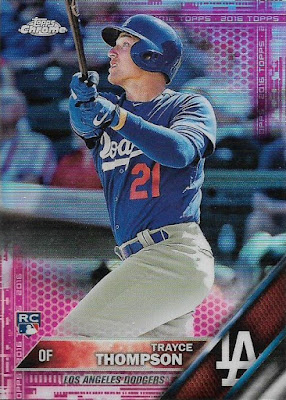 
That was an excellent pack. I can't tell you the last time I bought a Chrome pack and didn't pull a Giant. I don't think it's ever happened.

However, it will probably be the last 2016 Chrome pack I buy. I bought only one Chrome pack last year and I liked the design a lot more than this year. The honeycomb pinks just don't do it for me, along with all the other weird design elements.

Besides there are about four other new card products I can buy now anyway. I still don't know why Topps doesn't space these things out a little. I guess Topps is just like those Generation Z kids -- binge product releasing.

Fuji said…
If I come across one of these, I'll have to buy one. Love me some pink refractors... almost as much as I love that photo of Charlotte McKinney to the right of this comment. Who the heck is Charlotte McKinney? I guess I'm off to figure that out.
August 8, 2016 at 8:48 PM

P-town Tom said…
Didn't she do some of those Carl's Jr. hamburger commercials back in the day?
I've never been into Topps Chrome, but that Zobrist is pretty sweet.
August 8, 2016 at 9:30 PM

Commishbob said…
I tend to forget that they make this chrome set. I don't have any I don't think. But I do like cards with pink elements so maybe I'll find a pack.

Zippy Zappy said…
As a Gen Z'er I'm guilty of binge-doing stuff as well. Once I see something I like I want more and more until my attention span gives out and I move onto something else.

Sidenote, prepare yourself in case your daughter to want those foods she's binging on now anywhere between 6 to 12 months after she stops wanting them.
August 9, 2016 at 9:40 AM

BobWalkthePlank said…
I think you described the Marte card perfectly.
August 9, 2016 at 10:19 AM

Anonymous said…
Thanks for the heads-up that there are some Chrome cards like Zobrist which are not just shiny parallels. I'll keep an eye out for ones which fit into one of my 139 different collection paradigms.