Possibly the last current flagship set I ever complete 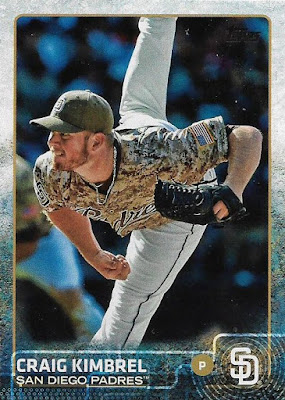 No other kind of collecting makes me feel more complete, more at one with the hobby, more invested, dedicated or exhilarated than set collecting. If I was told I had to limit my collection to one type of collecting, I wouldn't hesitate for a minute. Set completion would be the way to go.

The most logical set for me to complete is the Topps flagship set. It was basically the only thing you could complete from the time I was 9 years old until I was 15. And because I received that foundation, completing the main Topps set by going to the store and buying packs is the very definition of collecting for me. That IS card collecting to me. By all means, you can collect how and why you want, and you certainly don't need my permission. But everything else, every other kind of collecting, to me, is a spin-off, off-shoot or sequel -- there is only one original.

From where I come from, completing the Topps flagship set, specifically when you do it all in the year in which it was released, is the ultimate.

And it's quite possible I have just said goodbye to that kind of collecting.

Yeah, this is me being dramatic, again, but honestly, this how I see things at this point right now.

It also gave me hope that I would want to complete modern sets, because after 2010, I wasn't all that inspired by what I saw from flagship. 2013 was nice, but 2015 restored my faith.

Then 2016 Topps arrived and dashed that faith along a smoke-filled rocky shore. Full bleed cards with name plates that half float in the air, extended from half-obscured team logos, and the whole thing covered in fog is not my idea of flagship. I get that card companies have to be different and innovative, if only to quiet the people who keep screaming at them YOU HAVE TO BE INNOVATIVE, but to me that's not the way to go about it.

But to Topps, obviously, somebody thinks, that IS the way to go. Because we've all seen what 2017 Topps is going to look like.

I will say that 2017 Topps looks better than 2016. And that is the very definition of damning with faint praise because I don't like it much. The 3-D straight edge ensemble at the bottom of each card with the name plate headed off into the horizon is ... different. The haze in the bottom right of each card is obviously for parallels and it's weird. But there's some strangeness that seems like it still needs work, as pointed out here: 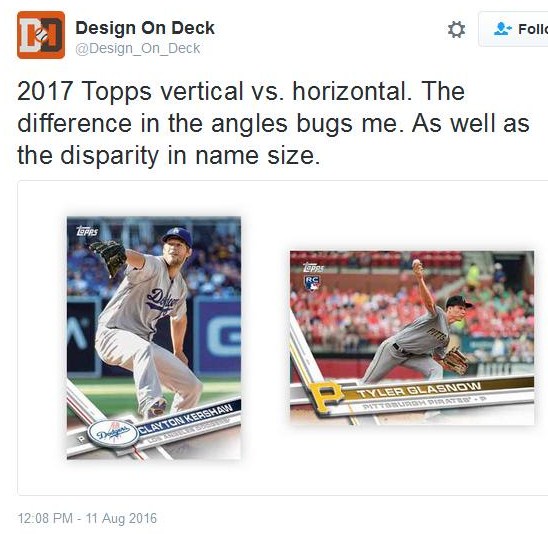 But beyond that, it's nothing I want to collect. It's Stadium Club visiting flagship, and leaving a mess all over the place. I will always like some sort of border on flagship. Why is Stadium Club if you're going to use flagship to focus solely on photos?

It's another app friendly design that doesn't line up with how I collect. It's digital first, and if you know anything about newspapers and "digital first" you know what a wild, west show that is. There is nothing guaranteed about what Topps is doing.

But this is now year two of that digital-first trend. Which makes me wonder how long this is going to go on ... and whether there is an end in sight.

I get that people don't want to go back to what's been done before (although I saw today that Topps is trotting out 1987 Topps-themed inserts AGAIN). And I get that kids don't like crusty old cardboard. But there has to be a way to incorporate old-school designing in a new way, the traditional flagship look in a new way (P.S.: Design On Deck has some good examples on his blog).

I'm not seeing that in 2016 Topps and now 2017. And I'm certainly not collecting it. (It's entirely possible that two years from now I fall in love with a Topps flagship design, but the pattern here doesn't show that).

That's good news for my 1972 Topps set. And whatever other old sets I choose to complete now that there's nothing modern worth my while.

Congrats, 2015. You just may have been my fond farewell.

Tony L. said…
It is a digital card world now, apparently. That's what Topps really designs its flagship for.

If it weren't for the damn stupid short prints, I'd consider trying to collect Heritage or Archives or something like that.
August 11, 2016 at 8:37 PM

Commishbob said…
I'd LIKE to think that these things are cyclical and Topps will come back around to bordered, more traditional designs but I am doubtful. I don't dislike the '16 design as much as you and I hate the '17 design with a passion but I'm really not the target market. What I think doesn't matter.

Zippy Zappy said…
"And I get that kids don't like crusty old cardboard."

I seriously wonder how many people who buy flagship are actually kids sometimes. Or who really buys flagship at all anymore.

Cardboard Jones said…
As a kid, did you even give a rip about the design? Or, would you not collect a Topps set because you didn't like the design?
August 11, 2016 at 9:55 PM

night owl said…
Probably not, although there were designs that I remember not liking as much as others (I was disappointed in 1979 and 1982 and I thought the first Fleer and Donruss designs were inferior). But who knows what I would have done if the 1980 design looked like 2016 Topps.
August 11, 2016 at 10:01 PM

Mike Matson said…
Topps loves redundant sets.. They put out Archives and Heritage. Allen and Ginter and Gypsy Queen.. I'm sure there's some of the higher-end stuff I'm missing that runs into each other.

It's starting to remind me of Ford Prefect's theory on why humans stated the blatantly obvious. Originally he thought if humans didn't exercise their lips, their mouths would seize.. He changed it to, if they stop exercising their lips, their brains start working.

In this case, rather than coming out with things collectors truly want, they're just churning out product after product in order to not have to put actual thought into what they're releasing..
August 11, 2016 at 10:12 PM

Jim from Downingtown said…
The closest I ever came to completing a set in the year it was issued (buying pack-by-pack) was in 1972. I got every card that year except the high-numbered Bill Russell.

Brett Alan said…
Yeah, I have no memory as a kid of thinking at all about whether I liked or didn't like a certain card, pretty much until I started getting Baseball Hobby News and they wrote about the aesthetics of it. Before that it was just did I have the card, who was on it, and at some point, how old was it.

Jeremya1um said…
I think I liked a few sets more than others when I was a kid ('90's), but most of the designs were decent and not this crap that Topps gets away with making now. Those Design on Deck cards look a whole lot better than the stuff Topps has put out since 2010 or so.
August 12, 2016 at 1:26 PM