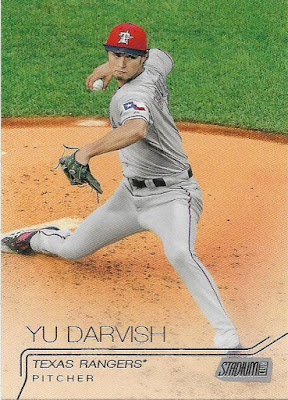 One of those main goals was completing the Set of the Year, 2015 Stadium Club.

I was seven cards away from reaching my goal before I received the shipment. I was able to find six of the cards that I needed.

The Yu Darvish card was one of them. Here are the others: 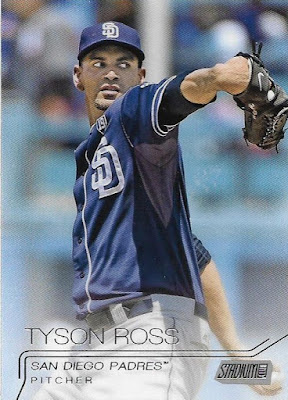 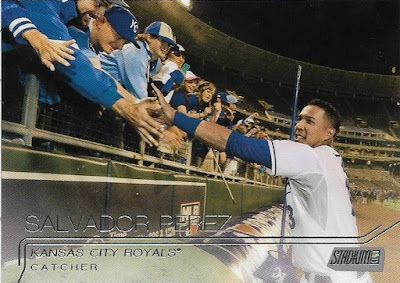 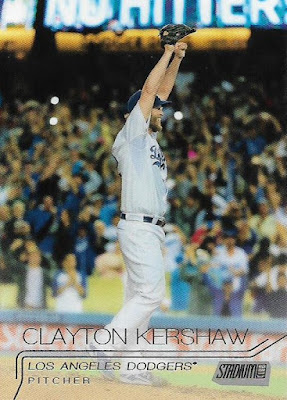 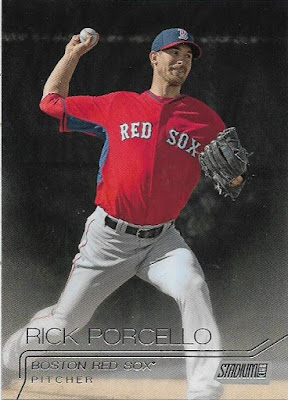 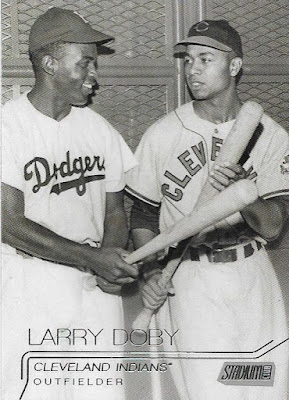 After receiving the cards, I then went through the stack of Stadium Club cards I owned to confirm that I needed just one card more to complete the set. Because you know how much a set collector's math can be off when it comes down to finishing a set.

And I confirmed it. I still need just the one card to complete the set.

This is the one card I need.

Isn't that funny? Imagine that. The last card I need is the Kris Bryant rookie card.

Wacky, right? What a coincidence!

Except it's not a coincidence.

I could have added the Bryant card to my COMC cart, but I'm not paying $13 for it, which was the cheapest one available. Even whatever I could negotiate down to would be too much for me.

Ah, you've stumbled upon a rant.

Actually, I don't believe the Bryant card is short-printed in the traditional modern sense. It's fairly obtainable. But Stadium Club suffers from that same collation issue that most other Topps modern sets suffer from in that it's rather obvious that certain cards are more available than others even though the perception is that every card from 1-300 is equal in terms of adding it to your collection.

But they're not. Because I've pulled like 5 Stadium Club cards of Brandon Guyer and not one of Bryant, or Clayton Kershaw, or Larry Doby.

Some of this is coincidence -- it's been going on since people first starting buying trading cards with their bubblegum. Some of it definitely is not. I've written about this before. Topps will never reveal the ratio that it uses for issuing cards, but there has to be a probability breakdown written somewhere. When I'm getting a card of Nick Castellanos three times as often in Stadium Club and a card of Carlos Beltran three times as often in Allen and Ginter than some other card I never see, something's up.

Back in the late '70s, Beckett or somebody else figured out that Topps was double-printing certain cards in its flagship set. I don't know if that has continued through every single year in some modified form, but I do know that whatever Topps is doing is never revealed or advertised. We're just supposed to keep on believing that every single non-SP card in a certain set is equally available.

Anyway, it'd be nice to know what you're getting into with these sets. Had I known that Bryant would be an intentionally elusive card, maybe I would have tried to grab it early, or maybe I wouldn't have bothered attempting to complete the set at all.

So, the Stadium Club set's not complete yet, but that's not stopping me from showing some of my favorite cards from it -- favorite cards that you haven't seen a million times yet, that is. I found 10 cards that I like that are not Valenzuela, Brett, Eckersley, DiMaggio, Maddux, Puig, Banks, Gooden, Chipper Jones, Jackie Robinson, or all those ones you've seen over and over. 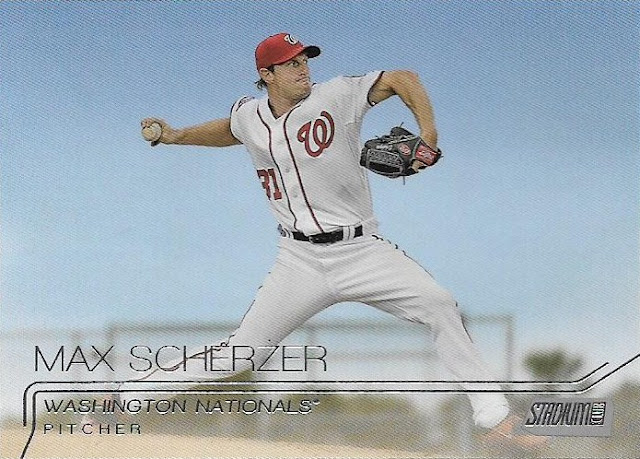 I will never tire of sky backdrops or solid-color backdrops in general. The easiest way to get your subject to stand out. 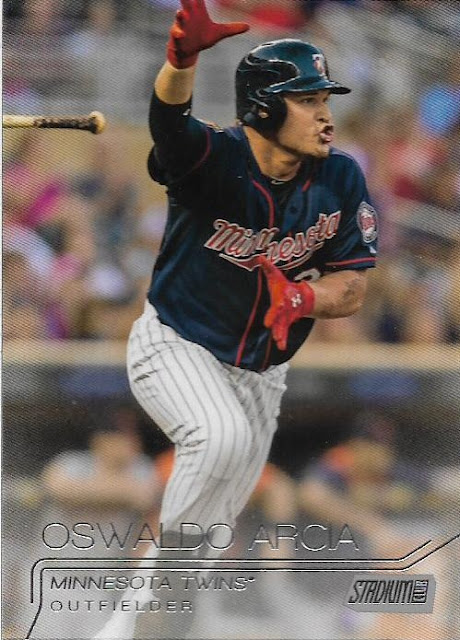 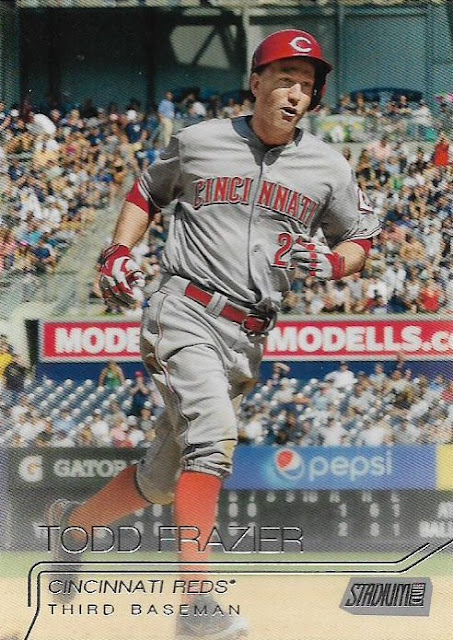 Really love the ground-floor, stadium-backdrop photo, too. Although this card makes me sad as Frazier is now with the colorless White Sox. I'm a National League guy at heart. To see certain players switch leagues, it almost seems like they've been banished. 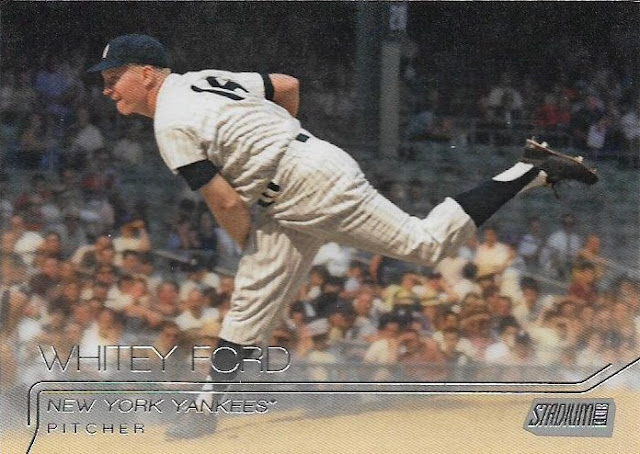 Lot of praise for Whitey's 2016 Stadium Club card, but Topps has used that picture before. I don't know whether it's used this one, and it's pretty good, too. 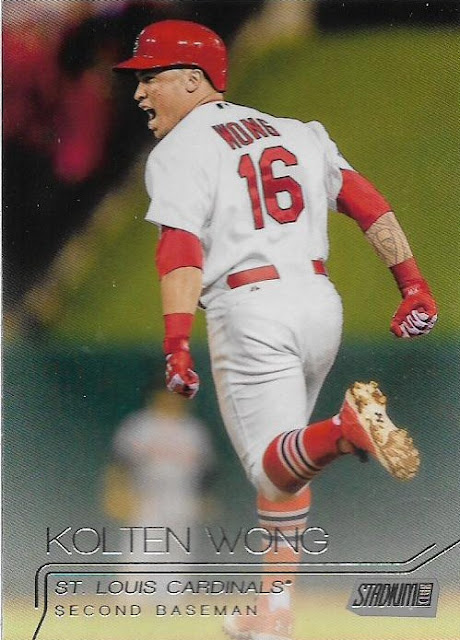 I'm not crazy about the Tiger Woods-like overexhorting that you see in Stadium Club and other Topps sets. I don't need to see a player's molars. Something more natural like this is more enjoyable. I'm thinking this is a walk-off of some sort. 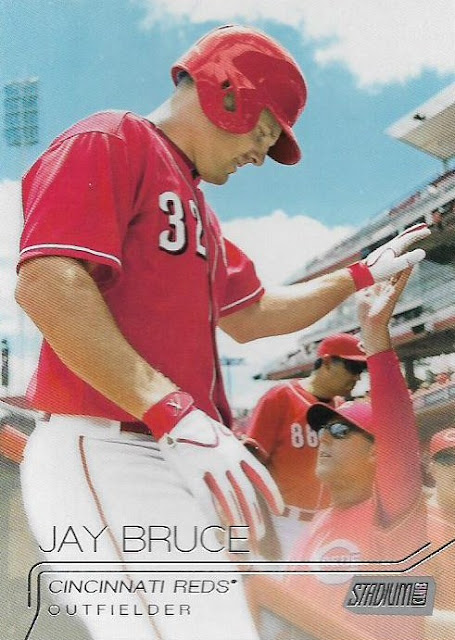 I'm not a photographer. But photography seems to be all about the angles. The dugout greeting shot is always pleasant and well-used. This angle makes it seem so much cooler. 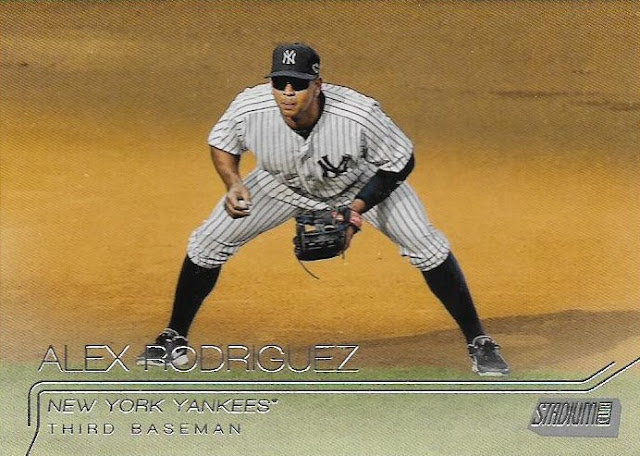 Dirt backdrops are just as good as sky backdrops. The grass cut-out and the uniform give away that this is a baseball game. But otherwise, I'd think A-Rod was in the desert scouting for armadillos. 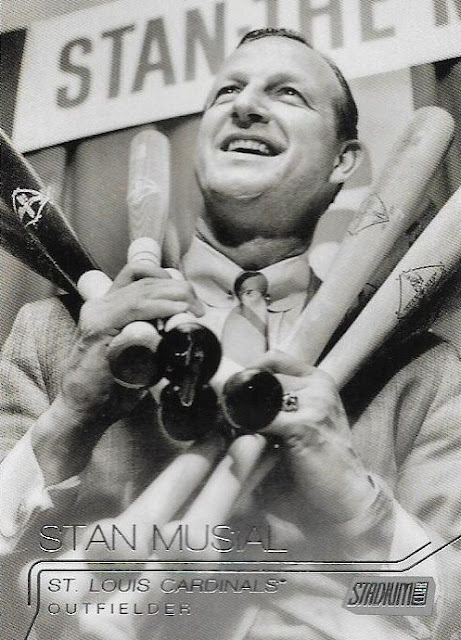 What is it about players holding a lot of bats? I don't know, but it's definitely something. If I were to pick another "type" collection -- and I'll never do it -- it would be players with lots of bats. I don't even know exactly how many Musial has here. 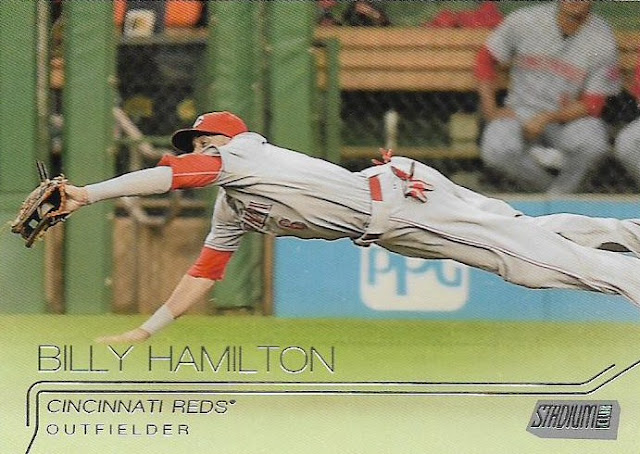 Too bad he has his hand on the ground. But everything else I enjoy. 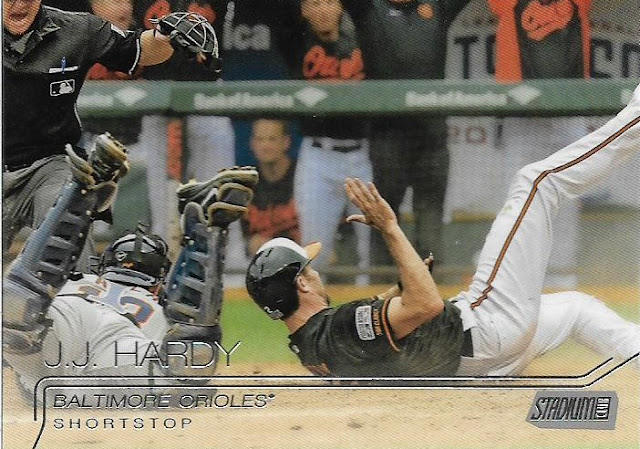 This card probably annoys some people who want a wider view of this play. But I love the tight crop because you see the whole story with as minimal detail as possible. Ump calls player safe despite catcher's diving tag and dugout celebrates. Really, I don't need full faces here.


I WILL get that Kris Bryant card. And for less than $10, too. It's only a passing aggravation. But I am not lying when I say that this is one of the reasons I'm not collecting 2016 Stadium Club.

Not going through that again. No matter how nice the set looks.

Zippy Zappy said…
"I'd think A-Rod was in the desert scouting for armadillos."

Stubby said…
I'm convinced (and have been since the 60s) that its regional. Topps sends all the Mets to California, all the Dodgers to Chicago, all the Orioles to Atlanta, and all the Cubs to St. Louis. Oh, yeah, and all the Red Sox get sent to New York while the Yankees are sent to Boston. I just know those Topps people have a very twisted sense of humor.
August 11, 2016 at 2:00 AM

BobWalkthePlank said…
That Hamilton shot was in Pittsburgh because Billy Hamilton only plays well against the Pirates.
August 11, 2016 at 7:44 AM

GCA said…
I fully agree that the hot star cards are definitely harder to pull from packs and boxes. My wants for the last few cards of recent sets are always the big names. 2014 Stadium Club - Ruth, Musial, Jeter, Trout, Harper and DiMaggio. Ok that set has a lot of iconic players. But even in flagship, I end up with Bryant, Jeter, Tanaka, Trout, Harper, etc. as the last base or insert left to complete the set. Never the Mario Mendoza types, always the biggest hype guys....
August 11, 2016 at 8:28 AM

Stack22 said…
How many cards on a sheet of of 2015 Stadium Club? That's where the answer lies. Assuming these shiney, non-gum having, things are still printed in sheets and cut.

Johnnys Trading Spot said…
Congrats on the NEAR finish. You now one day it will miraculously show up in your mailbox.
August 11, 2016 at 9:58 AM

Commishbob said…
Amen Amen Amen. And while Topps will deny it I'm here to tell you the this was true back when we're were messing with cards in the schoolyard in 1961. If you bought three packs you got two Jerry Kendalls but no matter how many packs you bought you never got Mickey Mantle.
August 11, 2016 at 2:16 PM

Fuji said…
Glad I decided to go out and buy this set... instead of build it. Hate dealing with unannounced short prints. I would still love to hear Upper Deck come out and tell collectors a little more about 2001 UD Decade numbers. I've opened a few boxes of this stuff and the lower numbers always exceed the higher numbers in that set. Best of luck on adding that Bryant to your set. I don't blame you for wanting to pay $13 for that card.
August 11, 2016 at 5:22 PM