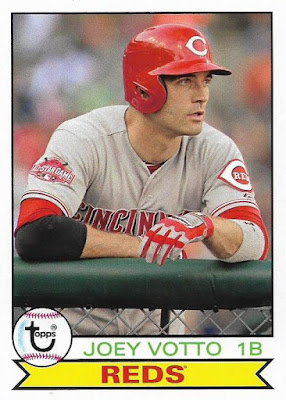 When I find something I like, I obsessively analyze it. That's how you know I like it. If only my past girlfriends knew this.

One of the few things that I like about the cards that have been issued in 2016 is the 1979-style cards from Topps Archives. I think they're rather well-done, capturing the look and spirit of the original 1979 Topps set, and doing a much better job overall than past versions of Archives.

I like them so much that I'm trying to complete the '79 portion of Archives. That is some kind of dedication because of those 10 stupid short-prints, but that just shows you my devotion.

I am now down to needing just 14 of the '79s because I just received a package from Mark M., from the My Best Friend Collects Chipper Jones blog. He sent me 37 cards from that portion of Archives, and now I must obsessively dissect them because I enjoy them so. 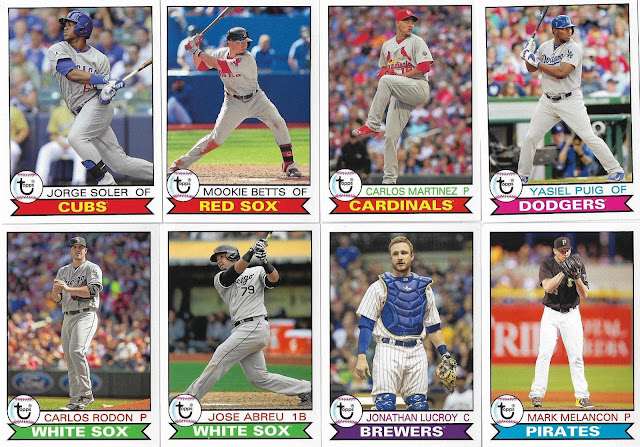 Let's start with what I like most about these things. The full-body shots and pictures taken from a distance are very 1979. None of these are as great as the Craig Biggio card that I showed before, but they all evoke that feeling of collecting cards in '79 and that is the ultimate compliment I can pay a baseball card.

Here is a look at some original '79s for comparison. 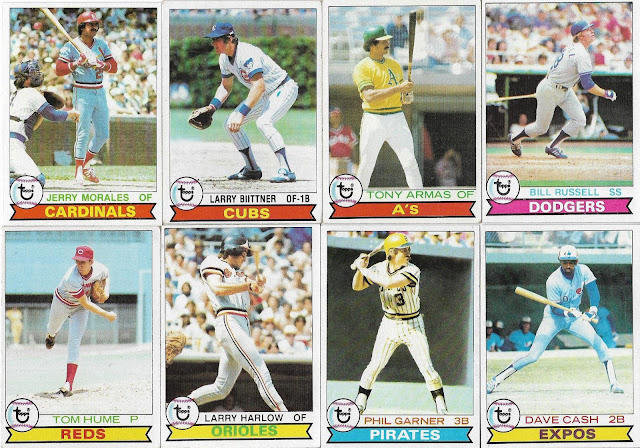 Perhaps some of you remember the Topps countdown I did last year. I didn't rank the 1979 set very highly at 28th overall. It's true that when I pulled the first '79 cards that year, I was a bit disappointed with the look.

But those cards are still from the '70s, still illicit a wave of childhood collecting memories, and sure are a heck of a lot better than most of the sets issued since. This is why I like Archives '79 so much. 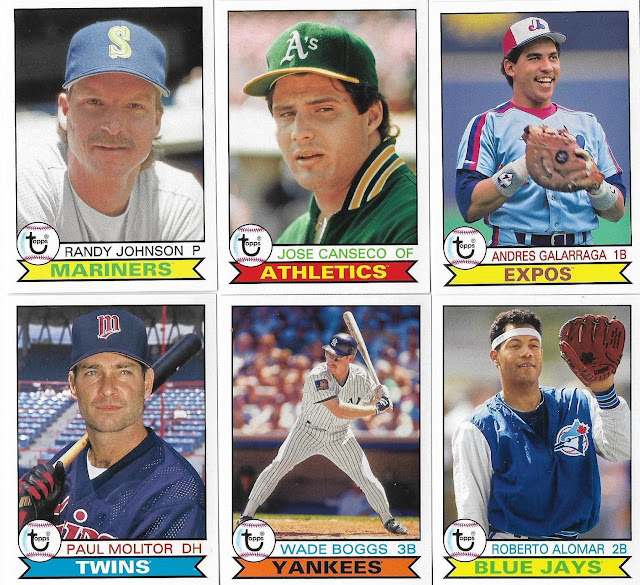 With the recently retired, such as the six above, these are fine. I don't have much reaction to them, although I don't remember any player in the '79 set staring into your soul like Randy Johnson. 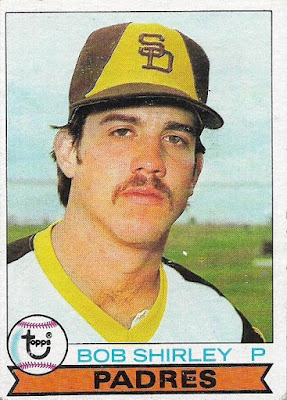 The best cards in this grouping are the Canseco and the Boggs. The Boggs because it's a distant action shot, which describes most of the 1979 Topps Yankees cards. The Canseco because there are also some tight, sweaty, unaware shots in '79 Topps. 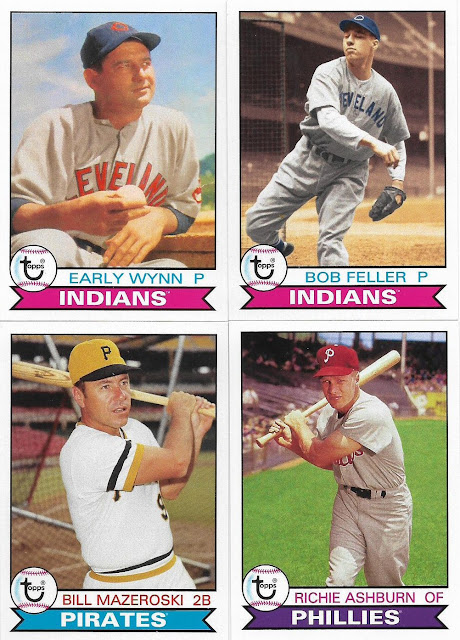 The older retired players, though, just don't work for me if they are pictured on a more modern design. The Mazeroski is OK, as I associate him with the '60s and this photo is likely late in his career. The other players would have looked much better on the 1953 design that is also in Archives. 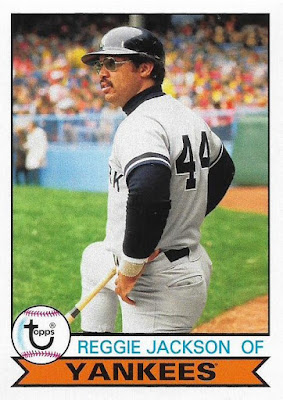 Here is perfection when it comes to retired players and Archives: a player shown with the team for which he was playing in that year. Reggie was a Yankee for the '79 set, and although he had an All-Star banner in that set, this still looks great. It's almost like owning one of the Burger King cards from that year with the different image than what's in the main set. And that was sooo cool when I was a kid.

This is the opposite of the Reggie card to me. I know some people like these, I don't. The Billy Williams is OK. He was retired by '79, even though he departed as an Oakland A.

But as you know, Seaver was a Red in the 1979 set and so was Joe Morgan. To see them as a Met or an Astro on a design that I knew so well, with players I knew so well as a kid, throws my brain off-kilter. I have to go running back to my '79 set to make sure those guys were still Cincinnati Reds. 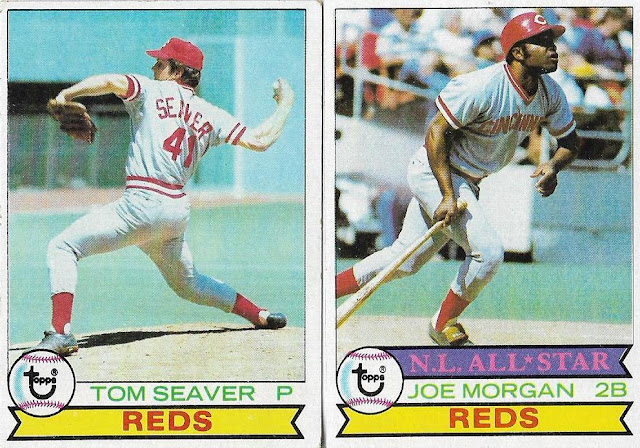 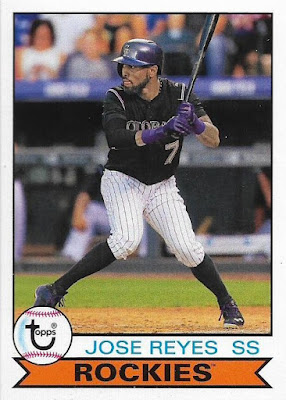 Of course, there are teams that exist now that didn't exist then. The Rockies were given gold banners, similar to what the Yankees and Padres have. The Rays received purple (Brewers and Phillies). The Diamondbacks got green (White Sox, Astros). The Marlins have blue (Twins, Pirates). And the Nationals, previously known as the Expos, properly feature the Expos' yellow banner.

Those added teams' cards take a little getting used to, I admit. 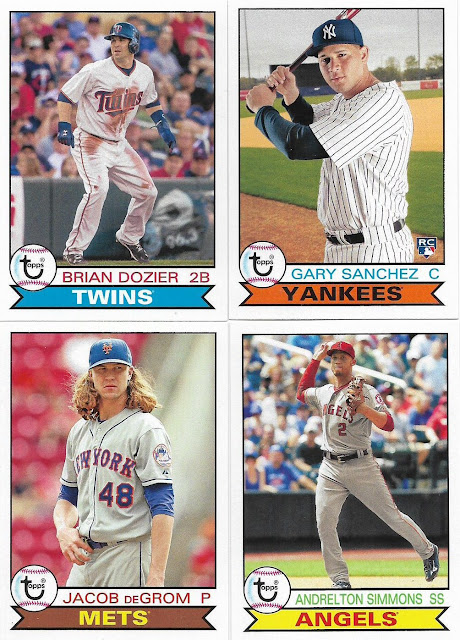 Here are few more that Mark sent that I couldn't fit in anywhere. 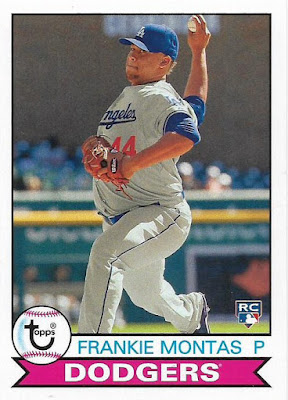 And this card won't go to the '79 set-completion task, but to the Dodgers' team set task. This was the last non-SP Dodger card I needed from Archives. All that's left now are the three (THREE!) dumb SPs. Isn't it funny how I don't have any yet? I wonder why? It'll be awhile before I feel like paying 8 bucks for a card from 2016.

But before I get too cranky, here are some other modern Dodgers Mark sent: 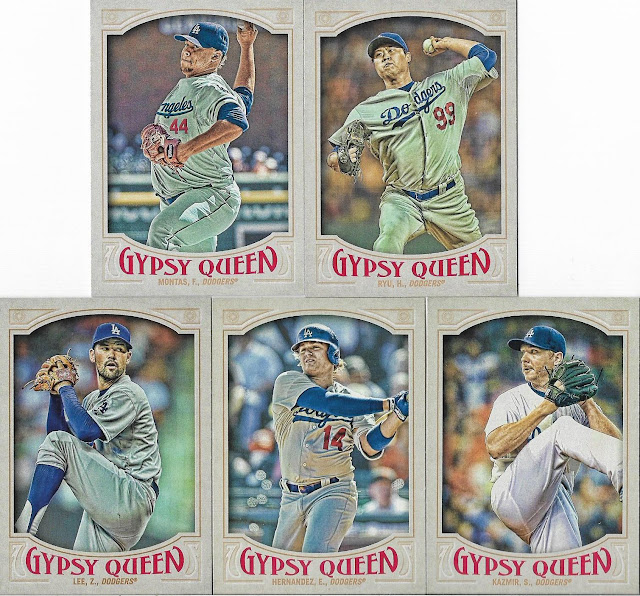 A bunch of Gypsy Queen that I refuse to buy. Yay! 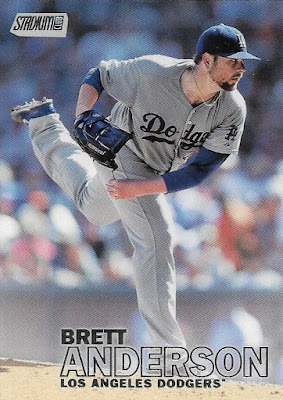 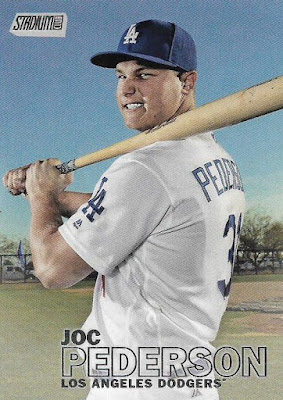 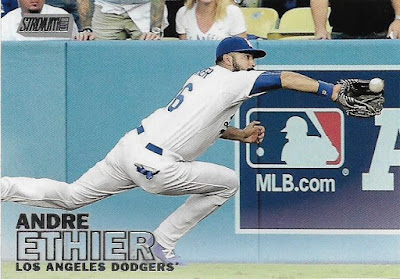 The fact that I didn't spend nearly as much time on those as I did on the '79 Archives tells you where my devotion lies.

And that means everything to me.

Nick said…
"Here is perfection when it comes to retired players and Archives: a player shown with the team for which he was playing in that year."

Yes! Thank you! For so long I thought I was the only one who believed this. I got a good deal of pushback a while ago on the blog when I mentioned something along those lines with last year's Archives.
August 15, 2016 at 12:47 AM

BobWalkthePlank said…
For whatever reason Topps is in love with using photos of Maz late in his career.
August 15, 2016 at 7:58 AM