The most confusing year for collecting 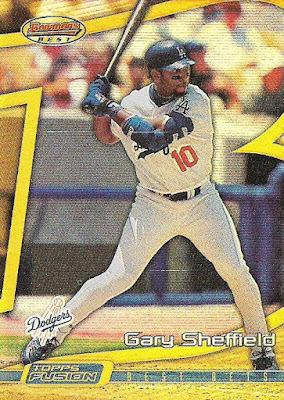 For all I know, the most confusing year for collecting is the year we're living in right now. With all the online exclusives being issued these days, how in the world is any future collector going to be able to get handle on which card belongs in which set from which year?

It's not easy to retro-collect -- i.e. collecting a set from a previous year -- and it's getting more difficult each year.

But the thing is, when you're actually in that year, collecting sets from that year, it all makes relative sense. (Except for those oversized cards you're supposed to hang on your wall. That doesn't make much sense). You're familiar with what's being released, you're able to keep track of most of it.

Take the people collecting in 2001, for instance. To them, that year of collecting must be the most logical year for collecting ever made. They long for the days of 2001 when collecting was so simple.

But me? A guy retro-collecting cards from 2001? There couldn't be a more confusing year.

Two of the most confusing sets ever made came out in 2001. This was underlined in my recent update of my Dodgers binders. Often when I'm updating, I'll come across a card that should have been placed in the binders earlier. But I'm way beyond that year and I have to decide whether to go back and update everything I just updated, or leave the card for the next update, which will come months from now.

There are two big culprits causing my confusion.

One is the 2001 Topps Fusion set. This was a set made up of tributes to various other current Topps sets. The cards were designed after those sets. 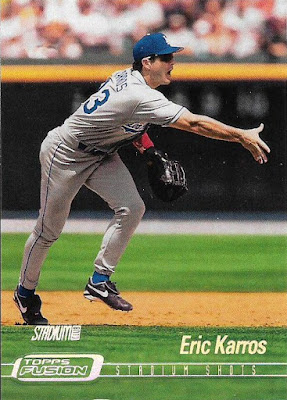 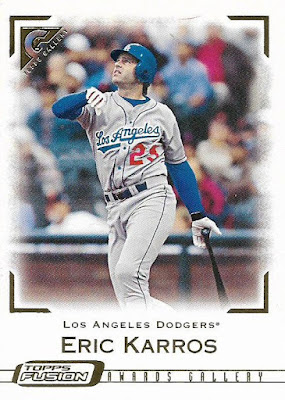 So even though these two cards look like cards from Stadium Club or Gallery, they're actually from Fusion. You can see the Fusion logo in the bottom left corner.

But it's not that easy to see if you're quickly sorting, and since the sets look so similar I often get them confused. I really get the Bowman's Best Fusion cards confused, having placed them with various other Bowman's Best sets from around the same period, thinking they were some sort of insert.

But that 2001 set is not as confusing as this one: 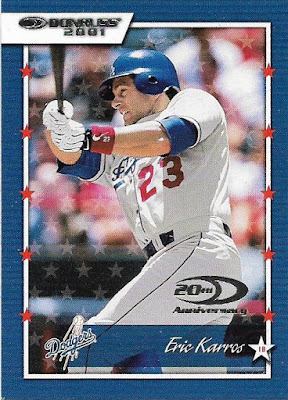 As those of you who were collecting in 2001 know, Donruss returned to modern-day cards in 2001 with a 20th anniversary set and a super patriotic theme.

Donruss hadn't been in the current-card making game since 1998 and its new set was very helpful with the "Donruss 2001" on every card.

What wasn't helpful were these: 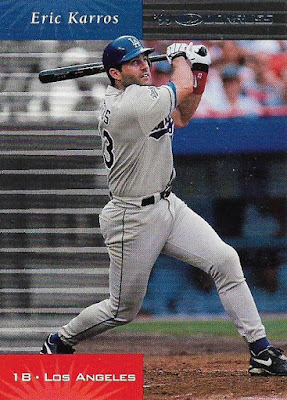 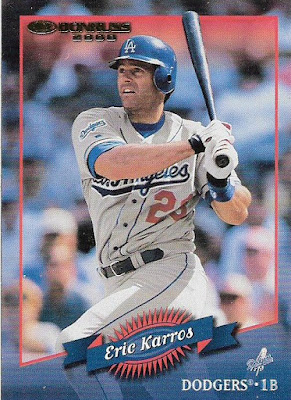 If you were collecting in 2001, then these were great. A fun "time machine" type of card. Donruss devised designs for "what-if" 1999 and 2000 sets, two years in which they didn't issue cards.

But for someone who retro collects, do you know how confusing it is to come across sets that say "Donruss '99" and "Donruss 2000" on the front that are actually from 2001? Even the backs behave as if they are from the year that is listed on the front, so Karros' stats only go up to 1998 and 1999, respectively.

Argh. When I started gathering cards from the period in which I wasn't collecting, these were among the most confusing cards of all.

I appreciate making discoveries in my hobby and some of this is fine. But I also have a limited amount of time, and combine this with a perpetual desire to "get things right" and it gets a little frustrating on the organizing front.

Consider this my warning to future retro-collectors.

CaptKirk42 said…
Yes very confusing. I was out of the current collecting scene from around 1994 to 2004/05 and find that time just as confusing as today. I find that between the zillions of "parallels" and stuper (Stupid + Super I just came up with that partly by making a typo) short prints card collecting is no more different than during those "junk" years. The card makers are still making millions of cards, just not millions of the base cards. Base base cards are starting to become an endangered species of card.
August 12, 2016 at 11:58 PM