August 15, 2016
I don't expect this post to make sense to anybody. But then I've gone through life with half the people in town looking at me like I just dropped in from another dimension, so this won't be anything different.

I went to an antique show yesterday and found some baseball cards. They were vintage cards. And they were affordable.

And I didn't buy a thing.

Come with me while I try to figure out why I would do such a thing.

This antique show is the show I went to last year. As I mentioned last year, it has replaced the card show that was in the same place that I attended every year. Last year I went to the antique show in hopes of spotting cards, and I did, and I was happy with what I bought.

So I returned to the show yesterday with that knowledge. When I arrived it was quite busy and filled with river people. Older retired types with bronzed skin, white hair and Hawaiian shirts. As usual, they're not in a hurry to move or be aware that there are other people trying to get around them.

Instead of doing a tour of everyone's overprice junk ... er, I mean priceless valuables ... I instantly looked up to the catwalk area where I had found the guy with baseball cards last year. Sure, enough, he was there again.

He doesn't have a lot of cards -- a couple of glass cases, and then three rows of top loaders, about a dozen cards apiece. But, boy howdy, does he have some cards. Under one of the cases is all kinds of tobacco cards from that really expensive era. I barely looked at those, because, come on, I really would have to be from another dimension to afford those.

The next case over had cards from the '50s and '60s. Some of those I could afford. However, there were only a few I wanted. And those were ones I couldn't afford. I was starting to sense a theme.

I went right for the top loader cards. Most of the cards were from the '60s, with a few '50s and '70s added. They were all very nice cards, in good shape, and notable players. But they just didn't hit my collecting spot. Yeah, I could have had a '64 Ron Santo or a '64 Willie McCovey (Robert is probably shaking his fist at me right now), but did they fit in my collection?

I'm not collecting the '64 set. And I don't collect stars exclusively. And I have no plans to do so.

And so it went on -- cards from 1958 Topps. I'm not collecting that. Cards from 1961 and 1962 Topps. I'm not interested in those years either. Every time I did stumble across a year that I collected -- Harmon Killebrew or the Reds team card from 1956, another Harmon Killebrew from 1967 -- the price was too much. I knew this guy would give me a good deal, because he did so last year, but it was still more than I wanted to pay.

Then there were the '60s Post cards. The one Dodger I saw was a '63 Maury Wills, which I saw last year, too. But I own that card now.

It was almost amazing how every card managed to elude my collecting wheelhouse by a matter of a couple of years or two or several dollars.

Sure, it would be nice to have a '64 Santo, but why? I have zero connection to the Cubs or Santo or 1964. My collection must be about connection.

And that, to me, is the difference between collecting and accumulating. Hell, yeah, I could have accumulated. Good stuff, too. But where the hell is it going to go? Trade bait is nice, except when you don't have room for the cards you want, let alone the cards you don't want.

So, I turned around with barely a hint or remorse, and walked back down to the main floor, and looked around. One guy had a glass case filled with Yankees cards. Oldies, too. But my gag reflex kicks in when I see so many Yankees cards in once place, and I can't even decipher whether I need one of them for set completion needs.

I walked out of there -- after paying the $7 admission mind you -- without a card. In days past, I would have stopped at the Walmart or Target -- I passed both of them on the way back -- and taken the money saved for the show and blown it on something current. But I didn't do that either.

But it's why I have a blog and trade with people from far away.

Just today, a card arrived that if it had been at that show, I would have pulled a muscle trying to buy it. 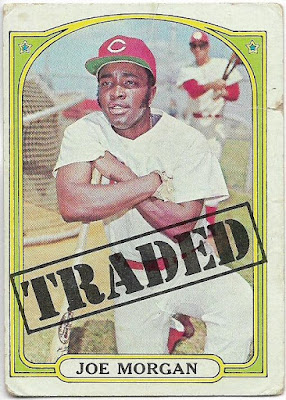 This card means I now need just 20 cards to complete the '72 set.

And this is the kind of card I want these days.

I have a lot of card interests. But I'm not looking for everything anymore. "Where am I going to put it?" is a question I ask myself more and more now.

Tony Burbs said…
One of the lessons my parents hammered into my head was that you shouldn't spend money just for the sake of spending money. As such, I too have walked away from such situations, albeit greatly disappointed, with nothing to show for it. I just have to remind myself that that money can be spent on something I actually want instead of something that'll momentarily scratch an itch.
August 15, 2016 at 8:29 PM

Swing And A Pop-up said…
I actually understand your post completely. I'm trying to stop buying cards with no rhyme or reason just because I don't have them. I'm not saying it's actually working, but I'm trying.
August 15, 2016 at 8:51 PM

Robert said…
Agreed 100%. You have to be judicious especially when you're on a budget. That '72 set you have working is enough reason to hold off on frivolous purchases.

Those '64s would have to had a home waiting for them. Since I already have them, you probably would have had to find Cubs/Giants collectors to take them off your hands. Who knows when that might happen?

GCA said…
That sounds like me when I make the trip across town to Target. They've got a good selection compared to all the other box stores in town. But the last several times I've been there, I walk out with nothing. This last time I would have left with an A&G blaster, had there been any. But most of the other stuff is either nothing I want, or too expensive for the little bit you get. Those five dollare packs need to have at least 30-40 cards in them. Not fourteen. I'll save my money and go home and drum up trades....
August 16, 2016 at 7:42 AM

Mark Hoyle said…
Two things that are tough to come by in life money and space. Smart decision
August 16, 2016 at 7:46 PM