I have low-grade Olympic fever 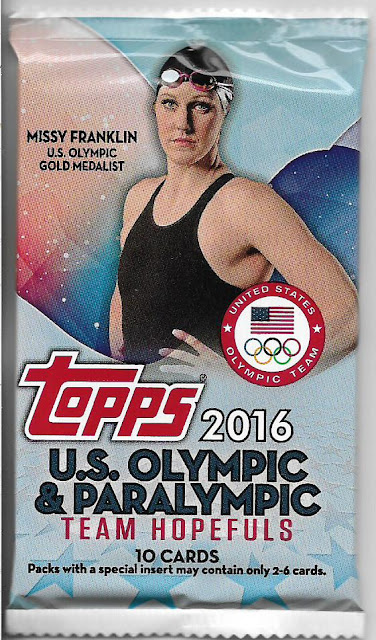 I'm somewhere in the middle when it comes to Olympic fandom. I don't collect anything Olympic and I think some of the sports are too weird to get to know. But at the same time I've come across people who do nothing but criticize the Olympics or refuse to watch them and that turns me off.

I do like watching the Olympics, and I do get into a little.

My job doesn't allow me to devote 14 days of prime-time viewing to it; in fact it gets pretty damn busy in the workplace around Olympic time. But, if nothing else, it's nice to have something worthwhile to view on your television for a couple of weeks.

And in that very low-grade Olympic fever type of mood, I snagged a couple of loose packs of USO&PTH cards to open.

So, let's see what Olympians/non-Olympians are in these packs. Maybe it'll get some of you into the Olympic spirit while there's still time left. Hum the Olympic theme if you must. 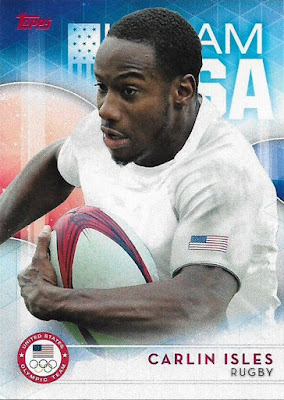 Isles led the U.S. in tries and points in Rio. This is the first year for rugby in the Olympics. I briefly watched the U.S. lose to eventual gold medalist Fiji, whose population is a little more than the population of North Dakota. We care a lot about rugby here in the U.S. 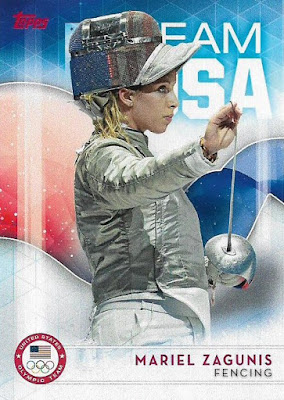 A Rio bronze medalist. Fencing is a lot more colorful than I remember it, with the light-up masks and the neon streaks indicating who poked who first. I don't pretend to understand most Olympic sports, but that's basically what fencing looks like to me, poke or be poken. 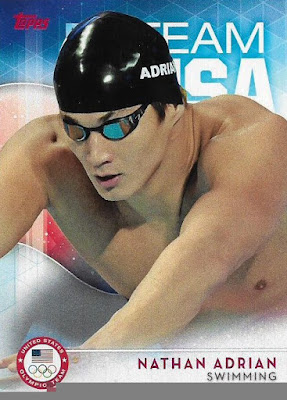 Adrian was the anchor leg in the gold medal relay finale for men's swimming, i.e., Michael Phelps' last Olympic race. Some of these photos are cropped way too tightly. 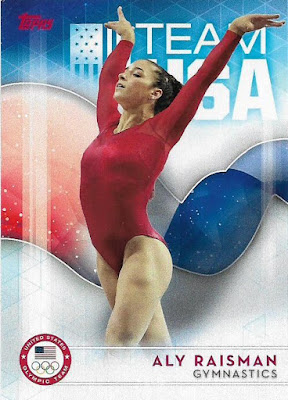 So far, all current Olympians! Raisman has a gold and silver medal in Rio. I also have a card of her from the 2015 Panini Americana set. That causes me to wonder if she'll appear in a First Pitch insert set next year and become a trading card renaissance woman. 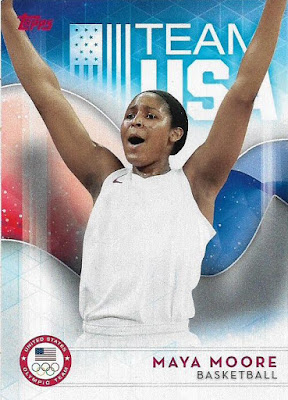 5-for-5 in Olympians. Basketball apologist Dan Patrick was defending the women's basketball tournament the other day, saying that people don't criticize Michael Phelps for winning so convincingly, how come people are down on the U.S. women's team? OK, Dan, probably because Phelps hasn't been lapping the field since 1996 like the U.S. women. 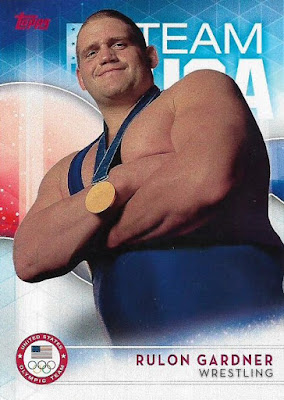 Wow, he's taking up a lot of cardboard territory. Gardner is not a current Olympian, which means he doesn't belong in this set. He ruined the streak of Rio Olympians. 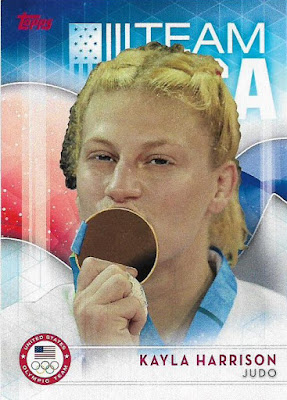 I saw her win a gold medal last week. I've covered judo, although it was quite a while ago. I don't really understand the sport, and anything in which one person piles on top of you in an effort to get you to pass out doesn't seem worth four years of training to me, but it was nice to see her so excited. 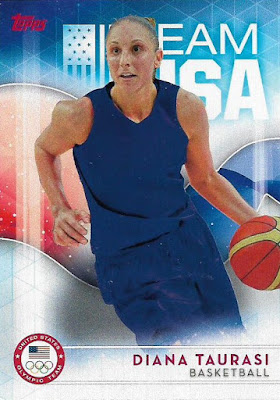 Did you know Diana Taurasi is the most-searched keyword name on this blog and has been for quite some time? Yeah, I have no idea why either. 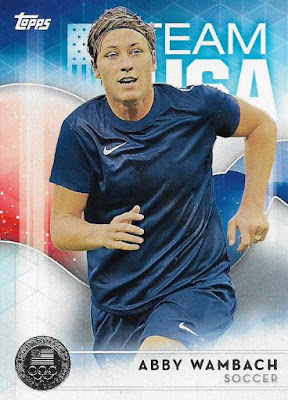 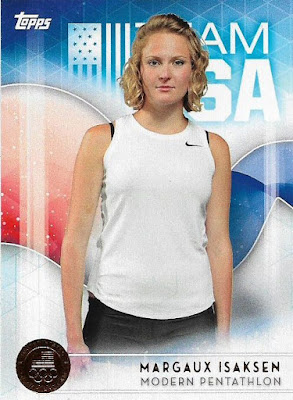 These foil parallel things are back, which means Topps still thinks it's 1992. I hate these, and if I collected the set, I'd hate them more. Wambach is retired and shouldn't be in the set. Isaksen is scheduled to compete Thursday. 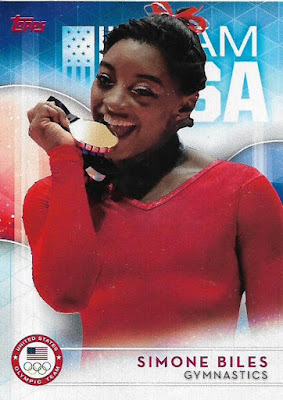 I pulled this card just as Bob Costas had finished talking about her. Yeah, I know, he's talked about her 782 times this Olympics, but it's still cool. Although this is not the greatest photo of our darling medal-hog. 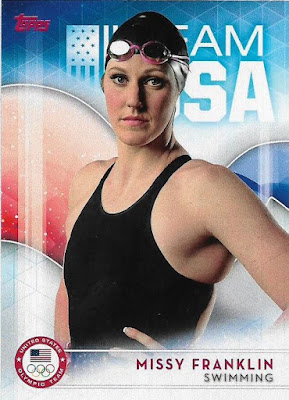 Topps put the cover jinx on her. No medals and she doesn't know what went wrong. #ThanksTopps 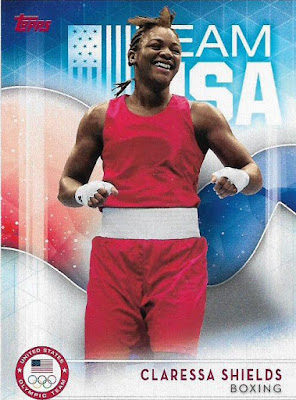 I haven't seen one second of boxing on Olympic TV. It used to be on during Olympic coverage constantly. Shields is scheduled to compete in the quarterfinals tomorrow. 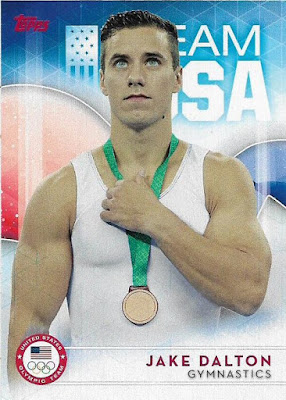 The guy with an Old West name was sixth in the floor exercise in Rio. 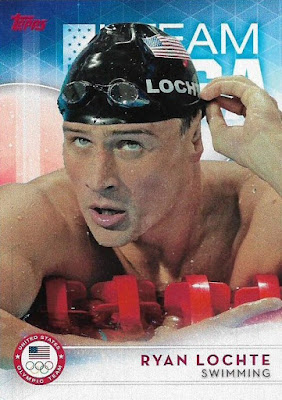 Bro, totally don't dig dudes who dye their locks, you know? But at least he's a Rio guy. Being held-up in Rio is about as Rio as you can get. 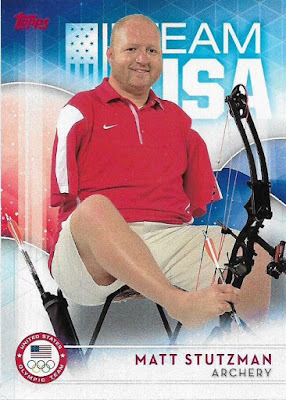 The first paralympian of the packs. I have been glued to the archery competition at the Olympics. Everything about it is amazing and fascinating to me, right down to the little hats the South Korean women wear. But to shoot with your feet? Next level stuff. 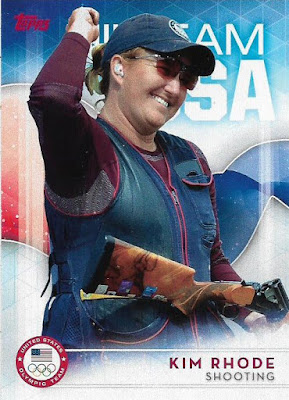 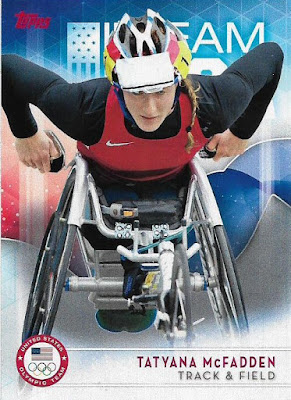 McFadden has been competing in the Paralympics since 2004. The back says she was born with spina bifida in a Russian orphanage and learned to walk on her hands to keep up with the other kids. Which means I have to stop complaining about every inconvenience in my life. 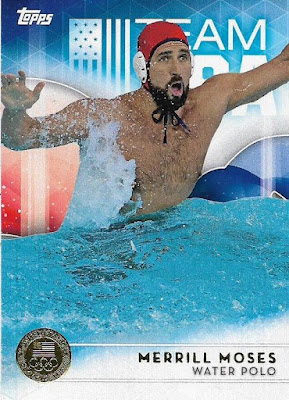 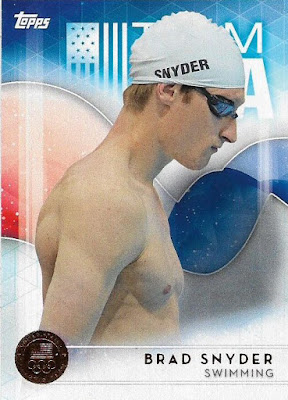 Moses plays goal for the U.S. team, which didn't advance out of the preliminaries in Rio. Brad Snyder is a paralympian who lost his vision in an explosion in Afghanistan.


So, that's it. Just two packs. No blaster. Certainly no box. I do like the design of these a lot better than the cards from four years ago. But I'm not collecting them so they're all up for grabs. Like I said, it's a low-grade fever.

I'll settle in and watch the Olympics today. Then it's off to work for the rest of the week, so I'll catch it when I can. And I'll be sad when it's all over.

The fever will have broken.

Adam said…
Kayla Harrison is a local, literally from the next town over from where I live. So I guess that means I'll claim it then if you don't want it.
August 16, 2016 at 7:58 PM

RAZ said…
One day on my first trip to Iraq I was standing in the turret of my Humvee roasting and feeling miserable because I was hot and we'd been sitting there in the sun for a long time. It was so hot that we wore gloves all the time to keep from burning ourselves on the vehicles, weapons, buildings, and pretty much everything. So I was sitting up there feeling sorry for myself and I see this Iraqi guy with no legs coming from way down the street, walking on his hands. He came all the way down the street, turned the corner, and walked all the way out of sight. On his hands. On the hot concrete in the summer in Iraq. I think about that sometimes when I'm feeling sorry for myself. There are a lot of similar moments that I use to regain my perspective when I start complaining or hear someone else complaining about how hard a given situation is. Your comment about Tatyana McFadden made me think of that.
August 16, 2016 at 8:09 PM

Billy Kingsley said…
Interesting that you opened two packs, I've opened three, and both bronze parallels match. None of the other cards appeared in my packs. Wonder what the odds are on that? I am a big Olympic fan but I am going to wait on the box. I paid full price for a box of the last winter set and now the hobby box can be had for $20 on Dave & Adam's. I can wait. Even if it takes a year I don't mind.
August 16, 2016 at 9:17 PM

Mike Matson said…
I don't really pay attention to the Summer Games.. I'll watch more of the Winter Games though
August 16, 2016 at 9:25 PM

Justin McLeod said…
I bought a single blaster of the product and pulled a manu patch and a Jake Dalton relic. I bought another.
August 16, 2016 at 10:09 PM

Play at the Plate said…
Love love love the Olympics. Anything Team USA is awesome. Technically, Missy Franklin did win a Gold Medal since she swam on the Relay in the prelims. A gold is a gold. And...wait a second, look over there to the right. Charlotte McKinney. O. M. G.
August 17, 2016 at 2:35 PM

Mark Hoyle said…
No much of an Olympics fan haven't watched any. Just not my thing. I don't begrudge anybody else who enjoys it. My mother has it on every night
August 17, 2016 at 8:20 PM

AdamE said…
Of you don't have any other plans for that Wambach I have a little soccer player in my family that would love that card.
August 17, 2016 at 10:34 PM

Stack22 said…
I wish it included international athletes as well. I'd probably buy some chasing the Bolt and the Italian synchronized women divers.
August 18, 2016 at 9:08 AM