August 04, 2016
(To those roaming the aisles at the National Sports Card Convention in Atlantic City, congrats. You are officially doing what I would like to be doing. My best guess on my first NSCC is 2018 in Cleveland. We'll see how that goes. Right now, it's Cardboard Appreciation time! This is the 243rd in a series): 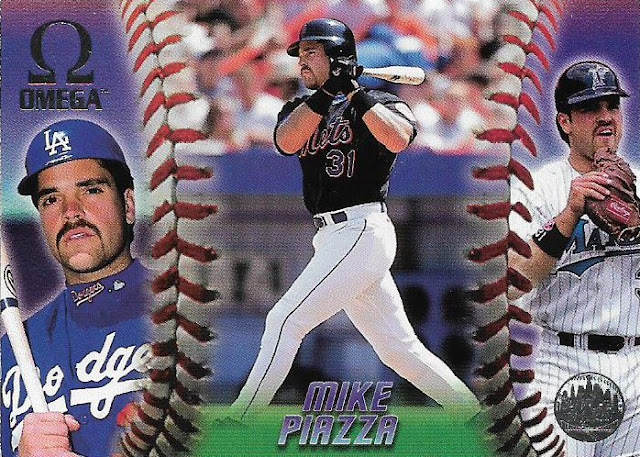 There are a lot of Mike Piazza cards from 1998.

There are a lot of Piazza Dodger cards, a lot of Piazza Met cards, and a fair number of Piazza Marlin cards. But this is the only card that I know of that features Piazza with all three teams that he played for in 1998 on the front of his card.

I wouldn't call Pacific's decision to place a photo with Piazza in all three uniforms a stroke of genius. It's more of a "why don't card companies do stuff like this more often?" move. In other words, "Why didn't someone else think of that?" How great would it have been if Dave Kingman appeared in the 1978 Topps set with all four teams he played with in 1977 -- the Mets, Padres, Angels and Yankees (instead he's horribly airbrushed into his latest team's uniform, the Cubs)?

Still, since no one else apparently thought of it before Pacific Omega, this card gets all the credit, which it should.

I just received this card today from a Twitter friend, who had an extra. Piazza and Griffey cards are all the rage this year with their Hall of Fame inductions, and while I don't normally go after the hottest cards of the day, this one I simply had to have.

Pacific Omega is a pretty weird-looking set. But in this case, the set got it right. And I think because of that it's one of the most memorable, dare-I-say "iconic," cards of the 1990s.

And now that I have this one, there are only about 25-or-so other Pacific Dodger Piazzas from 1998 that I need to get.

gcrl said…
This should be done more often. I tried to make up for the oversight by topps in '78

steelehere said…
Fleer did do something like this in 1983 with Joel Youngblood.

Stubby said…
Well, the difference with Youngblood was that he'd played for both teams--in 2 different cities--on the same day. And that was a major league first. The other difference is that that Fleer card was a "highlight" card of what happened the year before. Piazza did not play for two of those teams in one day and the card was issued in the actual year of his 3 team hat-trick. Now Fleer Tradition that year had a card for Piazza in each uniform--3 cards in all (not counting the '63 parallels). To me, that's more desirable than having three pictures on one card (and I say that as someone who was a huge fan of Pacific...though Omega wasn't my favorite of their product lines). That Omega card, to me, is a Mets card. To NO, it's a Dodgers card. But what if you were an Indians fan? What team do you put it with? Or would you have to get three of them?
August 5, 2016 at 2:59 PM

Another one-guy/multi-team card to mention is Kevin Mitchell's 1987 Fleer Update with Padres and Giants photos on the same card.
August 10, 2016 at 4:15 PM