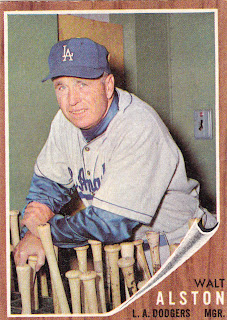 I have a feeling that 2011 Heritage is going to be a big hit.

There is something about 1962 Topps that appeals to just about every collector. Whoever thought of the wood panel borders was a genius. Plus the dark nature of the wood gives the set a classy, sophisticated look that was totally different for its time. (I can't say the same thing for '87 Topps). I feel like I should be wearing a sportcoat and listening to jazz when I see these cards.

If you look at the Topps sets leading up to the '62 set (and even the one immediately after it), they are filled with loud colors. Lots of reds, yellows and bright greens. But there is no color in 1962 Topps, outside of the photograph. That fact makes the picture stand out, and that's probably the main reason for the popularity of the set.

As any vintage collector knows, the '62 Topps set is also famed for the green-tinted variations, the many error cards, and the handful of instances in which there were two different versions of a player's card.

Yup, Topps is going to have lots of fun with 2011 Heritage.

When the set comes out, I'll be looking at the backs of the cards almost as closely as the fronts. 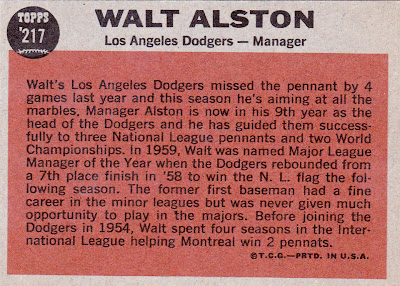 Well, I won't be looking at the backs of the manager cards. Those are plain boring. But it does offer a nice look at the color scheme used for the '62 backs. It's basically a continuation of the theme on the front of the cards. It's got that mahogany feel. It's a nice touch, as there weren't a lot of card backs in the '60s that extended the look of the front to the card back. Thirty years later, Upper Deck was doing that on a regular basis.

(Note that there is a typo in the last word of the write-up). 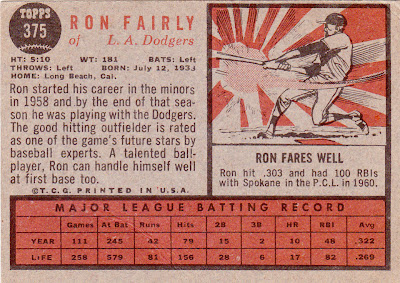 Here is a look at the average card back in the '62 set. Just like the front, it's classy. Almost formal. Even the cartoon is less cartoon-y. It's a straight-up drawing. And there is no cartoon bubble. Instead, each drawing has a title, such as "Ron Fares Well." So, so serious. So adult. 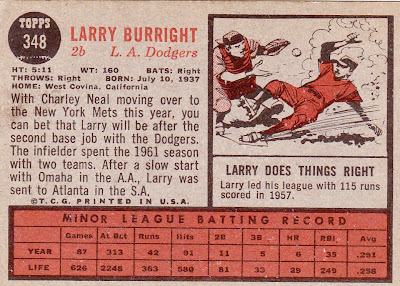 I wasted a lot of time earlier trying to find out who made the drawings for the 1962 set. I read once that it was from an artist who also worked at Mad Magazine. But when I tried to track down the artist's name, I found out that there were several Topps artists and cartoonists who also worked at the magazine. So if anyone knows the name, please let me know. 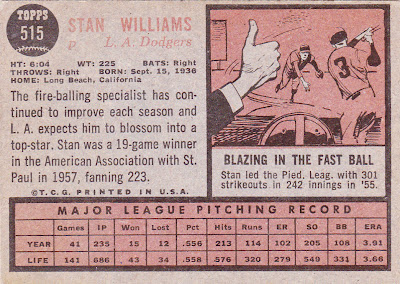 (A little fading on this card back).

As for the rest of the back, it's your basic 1960s card. Vitals. Write-up. The most recent year of stats and lifetime stats. The "year" and "life" mentions also struck me as formal when I saw these cards for the first time as a kid.

I often wonder why Topps returned to the single year of stats in the early '60s after going with complete stats in the late '50s. 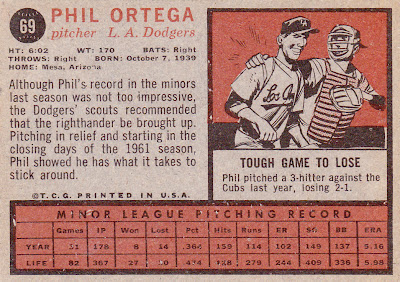 But now I look at them and see a card back that stands out. It's memorable. It's a classy and a classic.

So, sit back, pour yourself a vodka martini, flip on the Coltrane, and enjoy the sophistication of '62 Topps. Front and back.

I know I'll be buying a few packs of Heritage to see how well Topps matches the '62 feel, especially the backs and the drawings.

I mostly have just Dodgers for this set, so I'll scrap the "best of the set" category. But if we were going solely by the front of the card, I'd pick Walt Alston. I love that thing.

Don said…
The '62s have always been a favorite set of mine. It is something about the front where it looks like a hanging poster on some kids wall and the bottom right corner is curling up.
November 18, 2010 at 1:24 PM

AdamE said…
I agree on the back not on the front. I hate this set. To me this is Topps worst set of all time. No other set is even close to as bad as these. Yep it's even worse that the horrific Lichtenstein set (1990 Topps).

Matt F. said…
The '62 set is so hit or miss for me. They are either awesome or horribly, horribly bad.