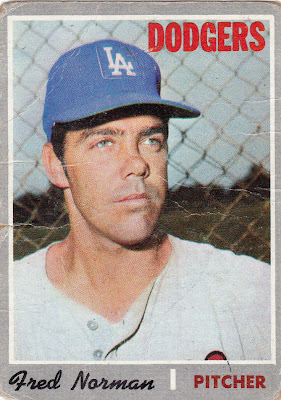 I began collecting as a kid in the mid-1970s. I knew '74, '75 and '76 Topps intimately. They were all around me. If I saw a picture of a baseball player, it was often framed in pennant flags, or brightly colored two-tone borders, or featured a tiny drawing of an anonymous player fielding his position.

Early '70s cards were old and unattainable. Only grown-up collectors -- which to my 10-year-old eyes also included teenagers -- had cards like these.

But one of my friends had this beat up Fred Norman card from the 1970 Topps set. He wasn't interested in baseball, so the card was mine.

For three or four years, the Norman card was The Oldest Card I Own. This was an important aspect of my collection. I think it was for everyone at that time. It was a marker of exactly how serious you were as a collector. The older the card, the more serious the collection.

That way of thinking doesn't fly quite as much today, with all the mojo box breakers out their salivating over shiny new product. But I still collect today like I did as a kid, and to me, older will always be better. 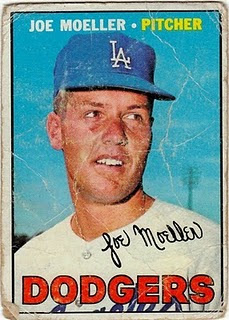 Around 1978 or 79, I acquired this 1967 Topps card. I don't remember exactly when and I'm not sure I remember how. I think it might have been one of the cards that my friend received from his older brother. But I do know that it supplanted the '70 Norman card as The Oldest Card I Own.

The card seemed out of place with all of my mid-to-late 70s cards. There was Moeller and Norman and then a giant leap to rest of my collection. 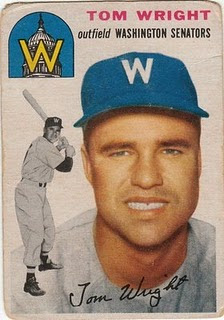 By the time I was a teenager, I began to respect baseball history a bit more. I was ordering older cards through the mail, going to card shows and shops and purchasing the first of the early 1980s price guides.

Cards from the 1950s became the ultimate goal. I never expected to actually get my hands on any, but those cards seemed like ones that would officially cement me as a certified collector.

This 1954 Topps card of Senators player Tom Wright, a complete unknown to me to this day, grabbed the title of The Oldest Card I Own from Joe Moeller. This was big because there was a 13-year difference between the Wright and Moeller cards.

I was beginning to have pride in my collection. This was serious. With my stack of '56s, I actually felt comfortable talking about my cards with other "more sophisticated" collectors. When you're a teenager, it's all about bragging -- what you have that others don't. This was something I could call my own, at least among my group of friends and a slightly larger group of acquaintances.

I found a couple of collectors at school who were far more serious than me, with far better and older cards. Still, in the hallways of my high school, I swung a deal with one of them for the Duke of Flatbush. 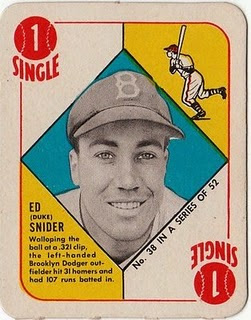 This 1951 Topps Red Back card became the Drop Dead Look At What I've Got Oldest Card I Own. Sure, things got ugly. But I was proud of this card for years and years because you can't get more Serious than 1951.

Oh, I knew about tobacco cards and 1920s candy cards and all of that. But that seemed like a world that existed on the moon. Collectors who had those cards might as well live in Hollywood and star in movies. I'd never be that Serious.

When I obtained the Snider I pretty much thought, "well, that's the end. That's as far as I can go." And I was happy about that.

Then, in 2008, I was three or four years back into the hobby and discovering card blogs. I started a blog of my own. One of the bloggers was this crazy guy named David who would send you boxes of cards for no reason other than he wanted to make collectors happy.

It was one of the more mind-blowing concepts that I had come across. But it was a fact. Because I received more than one box from Dave. And the first box contained this card: 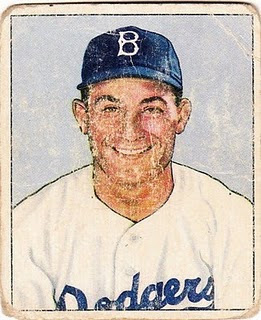 That's a 1950 Bowman Carl Furillo. I hadn't thought about attempting to improve upon The Oldest Card I Own for decades. But more than 25 years after I obtained the Snider card, I had a new champion. Just by chance. It seemed strange. I thought Snider would be the oldest card forever.

As much as I like vintage cards, the '50s was the ceiling for me. I couldn't relate to cards earlier than that. I just wasn't that interested, probably because I knew I couldn't buy any. So, Furillo here would do just fine. He was the '50s -- barely the '50s -- and that was all I could handle.

As usual, I was wrong.

Blogging has taught me several things, but one of the more inexplicable things is that good things will come your way when you least expect it and for absolutely no reason. 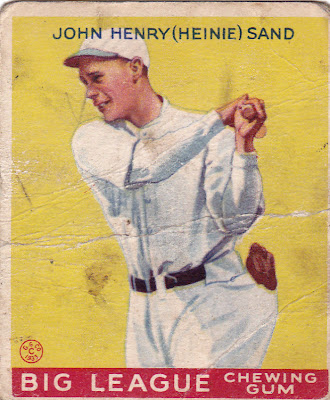 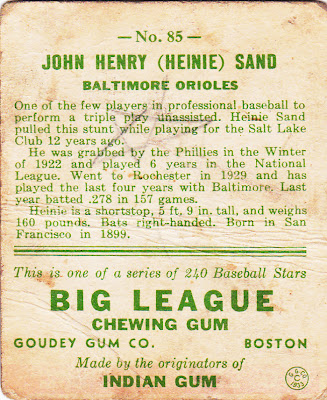 That is the front and back of a 1933 Goudey card of Heinie Sand, who was the regular shortstop for the Philadelphia Phillies between 1923-28.

As you can see on the card, he was with the Baltimore Orioles, a minor league team, in the early 1930s. I'm not sure why Goudey was featuring minor leaguers in this set. I know very little about Goudey cards. But I do know that this card officially is now The Oldest Card I Own. It beat the pants off the Furillo card by 17 years.

I received this card as a contest prize from Spike Glidden of Number 5 Type Collection. All I had to do was come closest to guessing the number of runs that would be scored in ALCS and NLCS combined. Lucky me, I was off by only two runs.

So I received that terrific Goudey card that you saw. And that means the Furillo card is now the second oldest card I own, right? 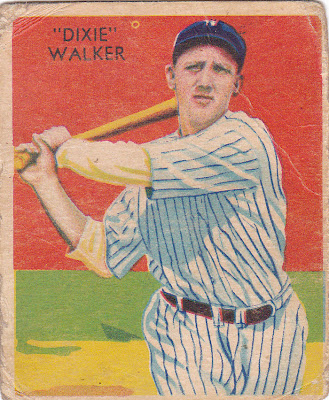 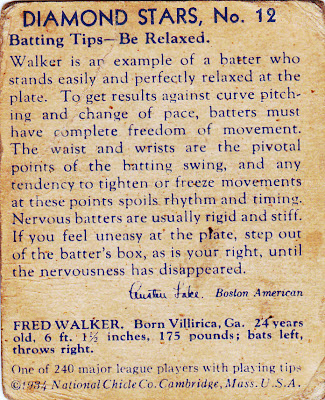 I also received this 1934 Diamond Stars card of All-Time Brooklyn Dodger great Dixie Walker. Sure, he's pictured as a Yankee, since that's the team he played for at the start of his career between 1931-36. But we all know he's a Dodger. 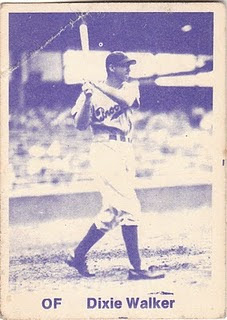 The guy killed the Giants.

So, this is one Yankee card that won't be leaving my sight.

I'm thrilled that I have two original 1930s cards in my collection. It may not seem like much to other collectors who deal exclusively in cards from the first part of last century. Or to those collectors who have a little of everything in their collection.

But for me, it means that I am up there with the Serious Collector, at least when I view my collection as I did as a I child.

When I view it as an adult, I know there are all kinds of collectors, and "serious" can mean a lot of things. If you ask me, anyone who has 3,000 unique Hideo Nomo cards is definitely serious, even if Nomo didn't pitch before the 1990s.

But having a card that is older than my father is something that's been a lifelong goal for me, even if it was an unspoken goal.

The kid in me now views my cards as serious, and me as a Serious Collector.

I'm one of them now. This is serious.

moremonkeys138 said…
This post was fantastic. I'm in the same boat as Spastik here, as I don't remember what my oldest was. I know that being around 9 or so, and having any Topps card made before 1987 was a big deal to me. None of my friends had anything older than maybe 1984. We did have tons of 1991 yellow Fleers though. I've got a few T206s and I can fully say they are fully worth getting, even if you just stick to one.
November 8, 2010 at 9:30 PM

Matthew Glidden said…
Agreed, what a great post concept and glad those cards fit the bill for you!

My first "oldest" was a 1974 Topps Hal Lanier. As an 8 year-old in 1980, cards from that banner-edged set seemed positively ancient! After 15 years away from collecting, my next leap back was a 1952 Bowman Jerry Coleman, one of my 50s favorites.

One minor correction--that Dixie Walker is a 1934 Diamond Star, a Goudey contemporary. Both came from companies based in Boston, one of the largest makers of pre-WWII candy and gum. (I think the rise of corn sweeteners moved production to less urban areas of the country after the war.)
November 8, 2010 at 11:06 PM

Chris Stufflestreet said…
Matt said it already, but 1934-'36 Diamond Stars were not a Goudey product. They were made by National Chicle, a company that also did an early Football set in 1935.

What a great idea. I still remember my "oldest" card as the disease that is collecting grew on me. That would make a great "bat around" post idea. Look for my take next week.
November 9, 2010 at 12:23 AM

night owl said…
Thanks for the correction, guys. I have much to learn about cards from this time period.

If you (or anybody else) needs some information about many of the great card sets of the past, check out my website:

AdamE said…
It's funny you posted this today because yesterday i read this post http://canthavetoomanycards.blogspot.com/2010/11/winnings-from-spastikmooss-part-deux.html

As far as my main collection, Red Sox, I have cards that are older than Hoffman but not as old as the boxing card. See every time I go to Wal Mart I look at the card aisle, 99% of the time my wife gives me "that look". I'm sure you know which one I am talking about, they all have it. But that hundreth trip or so she says ok go ahead. But instead of buying a $20 blaster I go home and spend that same $20 on Ebay. I now have 3 original T205 and one T206 Red Sox in my collection just because of this. I'll trade a blaster for an original tobacco card every time.
November 9, 2010 at 9:55 AM

Funny I was thinking about the 1970Fred Norman card yesterday . I've always felt it is one of the least complimentary card pictures of a player ever made.
November 9, 2010 at 10:38 AM

Steve D. said…
Spike sent me great stuff too from that contest. Just like you, the 1933 Goudey that he sent is by far my oldest card. The previous title holder was a beat up 1952 Topps card that I picked up for a dollar for the fun of it about 15 years ago.
November 9, 2010 at 9:06 PM