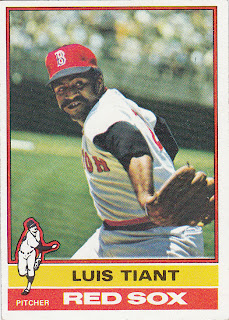 I wish this card made my top 60 of the best ever, but, sadly, it just missed the cut. Had I possessed it as a child instead of only seen it from afar, then maybe it would have been chosen. (By the way, it's Tiant's 70th birthday today).

Still a great card. Still better than an '87 Barry Bonds or half of the other rookie cards that Topps is asking you to vote for on its site.

I don't have anything against rookie cards. It's just what they have become that bothers me. I'm tired of it. I have several of the rookie cards shown on the site. Have the Gwynn, the McGwire, the Clemens, the Mattingly. But you won't see them on my top 60.

But enough of that. On with cards 21-40 of the best ever! Remember, you're trapped in a Michael's craft store. All you can see is shelf after shelf of yarn and beads and fake plastic plant stuff. There's glitter everywhere (*shudder*). These are the cards that will get you through the madness. And by "you" I mean "me." 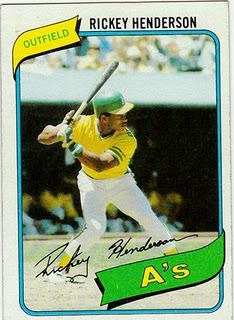 21. 1980 Topps Rickey Henderson: Here's a rookie mojo card. This was the first time I experienced that feeling. After that, it was "what's the big deal?" I'm over it. Rickey started and ended it all. Terrific photo of his stance. 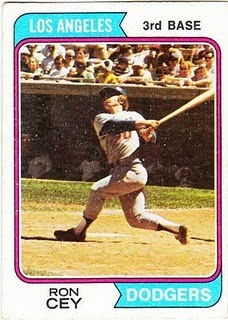 22. 1974 Topps Ron Cey: The first solo card of my favorite player ever. It's an epic photo, something that certainly drew us in as kids. I don't know if he was terribly successful there, though. 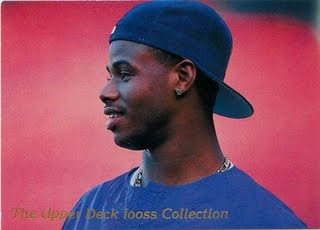 23. 1993 Upper Deck Iooss Collection Ken Griffey Jr: Possibly the most optimistic, hopeful card of the 1990s, issued one year before the World Series was canceled. This card changed perceptions. At least for me. 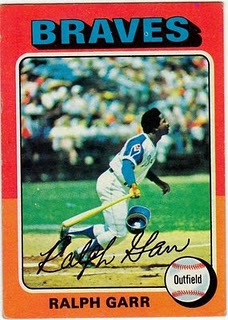 24. 1975 Topps Ralph Garr: You know that feeling when you're a kid and you see something and you absolutely HAVE to have it, but you can't have it because you're a kid and you're powerless, and so you just wait and wait and wait for-EVER until finally it's yours? This card is that feeling in cardboard form. This is actually a reused photo, but I didn't know that as a kid. I thought this was the most amazing card ever made. 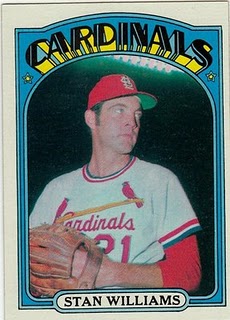 25. 1972 Topps Stan Williams: I really need to reconstruct my banner and get this card in it. The best night card of all-time. It was also Stan Williams' last card. What a way to go out. 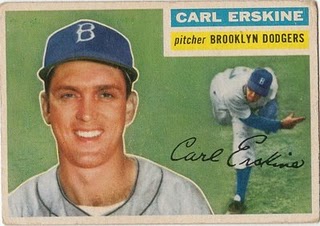 26. 1956 Topps Carl Erskine: Selecting a '56 card for the top 60 is difficult because they're all terrific and they're all very similar. But the Erskine one was an instant favorite when we were first splitting up ownership of those '56 cards on the dining room table when I was a teenager. From the start, I felt a kinship with this card and player that's difficult to explain. 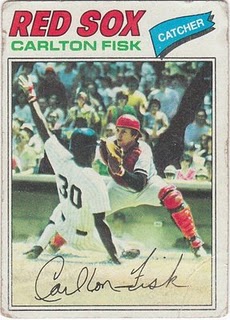 27. 1977 Topps Carlton Fisk: We had never seen anything like this card in 1977. It was practically perfect. Given my family's love for the Red Sox and hatred for the Yankees, it had everything going for it ... except for the ump's out call. 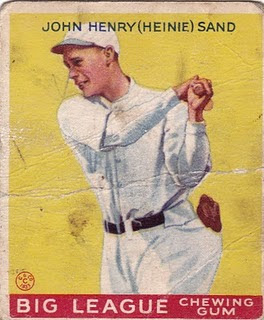 28. 1933 Goudey Heinie Sand: I have to bring along the oldest card I own! Why would I leave that card behind? Interestingly, after receiving this card, I discovered I already had a Heinie Sand card. 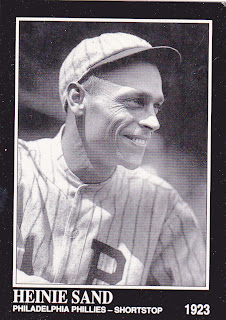 It's one of those Conlon Collection cards. The back of the card tells an interesting story about how when Sand was with the Phillies in 1924, the Giants needed one win against Philadelphia to clinch the pennant. The Giants' Jimmy O'Connell offered Sand $500 if he would "go easy" in that series. Sand went public and O'Connell was banned for life. Evil Giants. 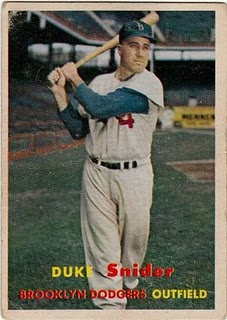 29. 1957 Topps Duke Snider: My favorite Snider card. In fact one of the most valued cards of my collection. I'l not thrilled with the '57 set, but I think you have to take it on a card-by-card basis. This particular one is phenomenal. 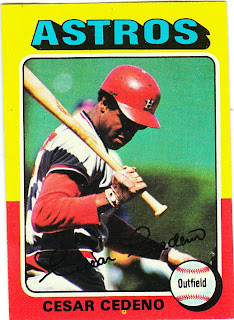 30. 1975 Topps Cesar Cedeno: This was my favorite card for awhile in 1975. I remember where I was when I pulled it and what time of year it was. I thought the photo was very cool. I later read a story about Cedeno, who was considered the next great star at the time. That made this card even more of a favorite. This is one of those cards that transports me back to a specific moment in my childhood. That's what the top 60 is about for me. 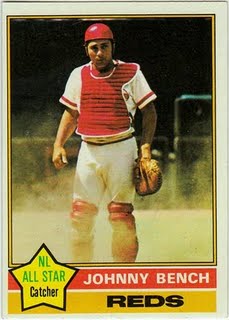 31. 1976 Topps Johnny Bench: Bench rising out of the dust after killing six outlaws on the desert prairie. Possibly the greatest card in history. Yet it's not on Topps' list. 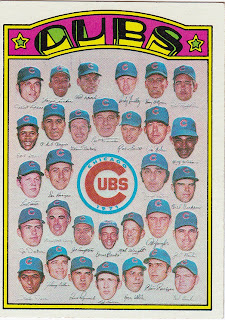 32. 1972 Topps Cubs team: Floating heads are a necessity on the top 60. There are a lot of candidates out there. I chose this one because:

a) there are so many floating heads
b) they're featured on the psychedelic '72 Topps design
c) Leo Durocher, an old, crotchety guy, is dead center on a groovy, hippie design
d) It's an acid trip on cardboard. 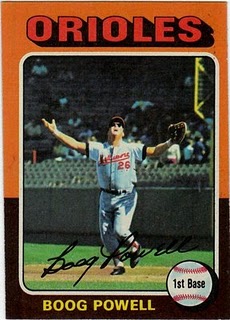 33. 1975 Topps Boog Powell: The only card that could throw us kids into hysterics every single time. 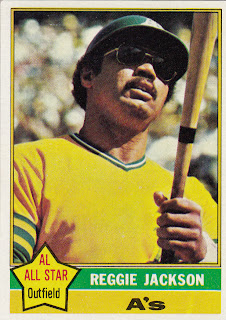 34. 1976 Topps Reggie Jackson: One of the best cards as far as summing up an image and a time in history. Even his card number is 500. Somewhere in the background, a pitcher is shaking. Oh, and look at all that yellow! 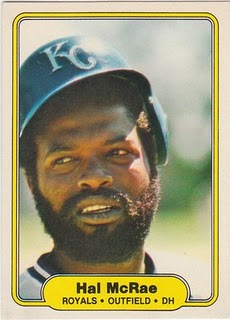 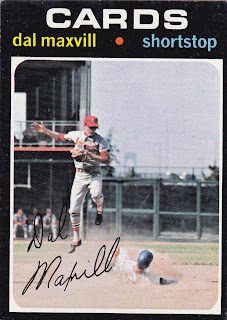 36. 1971 Topps Dal Maxvill: Holy, moly, I nearly crapped my pants when I saw this card for the first time (don't worry, I was still of age when crapping your pants was mildly acceptable). This exercise in finding the top 60 cards is making me love the '71 set more and more. 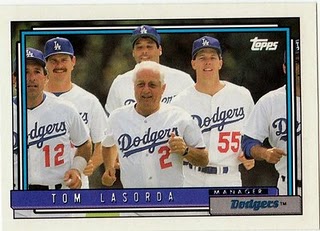 37. 1992 Topps Tom Lasorda: Always brings a smile to my face. Probably not the best manager card ever, but certainly one of the greatest, and the one that amuses me the most. 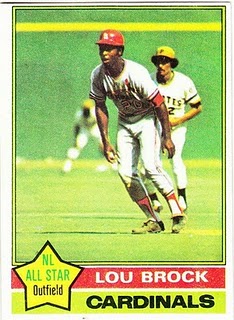 38. 1976 Topps Lou Brock: This card gives me the perception that Brock is running on a green highway. And he's passing every single car. 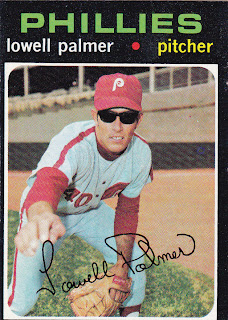 39. 1971 Topps Lowell Palmer: The scan cut off the bottom of the card. I don't have the 1970 card in which Palmer debuted his groovy shades for the first time. But I think this design goes with the whole Palmer persona much better. 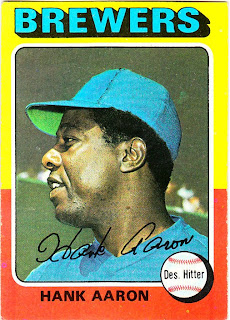 40. 1975 Topps Hank Aaron: OK, not the greatest Aaron card ever. In fact, it's kind of sad with the bad airbrushing and all. But this card was the realization for me of what makes a legend. I had only a vague idea of who Aaron was at the time, but I knew he was someone worth admiring and his card was something worth desiring. These were both new concepts to me.

OK, there are 20 cards left. I'm going to need them. The smell of potpurri, or whatever the hell I smell when I'm forced into Michael's, is making me queasy.

Funner Here said…
Love the Henderson rookie. Also interesting is the Tommy LaSorda card that captured what is surely his only run ever.

Charles @ Hoopography said…
That Henderson card is great and actually reasonable to add to a collection.
November 23, 2010 at 9:45 PM

Chris Stufflestreet said…
That '74 Ron Cey is the card Cher ripped in half in the film Mask. There's a scene that makes many collectors yell out in a way that Bluto did in Animal House when the booze was dropped on the sidewalk.
November 24, 2010 at 12:18 AM

AdamE said…
You have to put 1952 Gus Zernial on this list in the next 60. If you are only posting cards that you own you must get it before you finish up the top 60. I mean come on he is using his mind to hold all those balls in the air while wearing a pink shirt.
November 24, 2010 at 1:48 PM

Community Gum said…
In my book, every single one of those Iooss cards belongs on a top 60 list. Those inserts changed my life as a kid. I only have the Mattingly and Ripken, which I pulled at the time... never even saw the Griffey. I wish someone would make a photo-centric set again... -Andy
November 24, 2010 at 2:31 PM