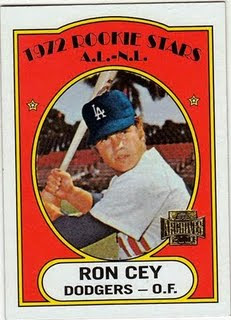 First, I wanted to do this post late last night after work. But my independently-minded scanner had other plans. And not wanting to stay up the rest of the night trying to convince my scanner that it's in his/her best interest to scan when I ask it to, I went to bed.

This morning, I flipped on the scanner. First scanning try. Scanned like a dream. (*Sigh*). I hope the scanner likes curbs, because it's going to be kicked to one some day soon.

Secondly, my 10 straight days of work has been cut down to 7 straight days. Someone at work actually took note that I was starting to look pasty and offered to help. I know some of you were looking forward to my posts degenerating into mindless incoherence around day 9 or 10, but it's not going to happen. Well, not because I'm exhausted anyway.

All right, now onto the "wow."

I have received some pretty great cards since I started blogging and been the recipient of some super generous packages. Some of the stuff from Max or Joe or Tribe Cards has made me drool with gratitude. And I have tried to broadcast times when people have been so generous that they actually took the time to tailor their cards/gifts to my specific wants. I'm thinking of John sending '75 minis from England, and especially of this Hershiser item that blew me away.

All cards that I receive are tremendously appreciated. But only a very few actually make me say, out loud, "wow." (I'm still working my way up to "awesome," guys).

A card package yesterday got a "wow" out of me.

There are other players that I like and collect: Orel Hershiser, Hideo Nomo, Clayton Kershaw, Sandy, Jackie, Fernando, etc., but they finish miles behind Cey.

A couple of weeks ago, I watched the replay of Game 4 of the 1978 NLCS, the Dodgers' clinching game over the Phillies. Cey was amazing in that game (another player that I thought was amazing in that game, which totally floored me: Terry Forster. Yeah, the goo guy). It was as if he could do anything, all on those little penguin legs. And, he scored the game-winning run. I forgot how happy I was watching him race plateward. And all those little kid feelings of watching your hero do something great came rushing back.

So, it is important to me that I obtain every Ron Cey Dodger card that I can find. And some of you have sent me Cey cards, which really hit the mark. They're at a higher level than other cards that I receive.

But one of you hit one level higher. 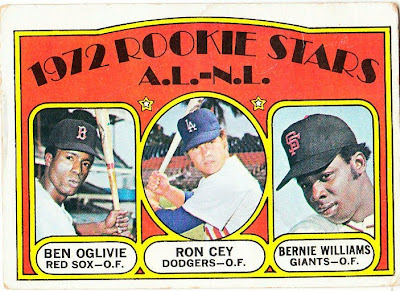 That is Ron Cey's rookie card, the origin of that Topps Archive card at the top of the post, and it was sent to me by the one and only Collective Troll.

He sent me a bunch of other cool cards that I'll get to sometime later, but I wanted to feature this one by itself because it is one of the major key cards if you're collecting Ron Cey.

I was leafing through the cards Marck sent, trying to determine why he sent me all these fine vintage cards -- Dodgers and some cool '81 Topps that I need for my set -- when I came across the Cey rookie.

(Wait a minute, that's not an archive card. That's his actual rookie card).

Everyone thinks that Cey's rookie card is his 1973 Topps card, the one he shares with Mike Schmidt, which costs a bundle and I never even hope to own because I hate throwing down that much cash on a single card. (My wife would hate it, too. And my daughter, and my dog ...).

But that's not his rookie card. I HAVE CEY'S ROOKIE CARD. And some day maybe I'll get that '73 card featuring Cey (and Schmidt, and the Padres' Dave Hilton). But today, and for the next few days, I don't care, because:

I HAVE CEY'S ROOKIE CARD.

Rod (Padrographs) said…
I always wanted the 73 Dave Hilton rc but those other two guys always made it too expensive
November 10, 2009 at 1:45 PM

Collective Troll said…
Night Owl, I couldn't wait for you to get that package! I wanted a Wow so badly. I showed the cards to Wife and said "so do you think the Owl is gonna like these?" but she just made a remark about the wild hair growing all over Bill Buckners face. I thought about posting that card before I sent it-the rookie of two of the finest players of the 70's and a guy with the same name as one of the best of the 90s. Anyway, glad you liked. I've wanted to get that reaction from ya for a while... You can thank yourself, Wicked Ortega, Joe and the rest of the blog o sphere who have taught me to be Generous! Cheers!
November 10, 2009 at 2:04 PM

Matt Runyon said…
Excellent! Those surprise shipments are the best ones.
November 10, 2009 at 2:07 PM

Collective Troll said…
By the by... Great use of foreshadowing and glad you no longer have to work a million days in a row! More time to blog, woo hoo! Oh and I really couldn't believe that you didn't have his rookie yet! that stood out big on your wantlist, I had to do something about it...
November 10, 2009 at 3:29 PM

Play at the Plate said…
Someone you work with must read your blog and they didn't want you to end up looking like Dick Davis. Nice work by the Troll getting you that card.
November 11, 2009 at 2:07 AM