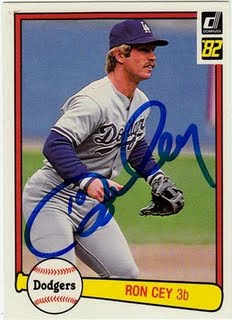 Today is my seventh straight day of work. If everything goes correctly, I will have a day off tomorrow, work three more days, and then -- what a concept -- actually have two days off in a row.

But anyway, tonight will be a busy one. So I need a quick and easy post. Fortunately, Dinged Corners has bailed me out by asking me for my favorite on-card autos.

I don't have a lot of autographed cards because I'm not much of an autograph hunter. I've detailed this before. The short version: I don't have the personality or interest to devote time to tracking autographs. And I'm a bit wary of a pursuit that is plagued by forgeries and fakes.

But, like most collectors, I sure do appreciate an autographed card that I know to be real -- certified or otherwise. And, yeah, the stickers bother me a little. I can see the fundamental problem with them. But again, I'm not collecting for autographs, so I can't get worked up about it.

All of my autographed cards have been featured on the blog before, since most have been acquired since I started this blog. Limiting it to three on-card cards was tough, because it meant eliminating these: 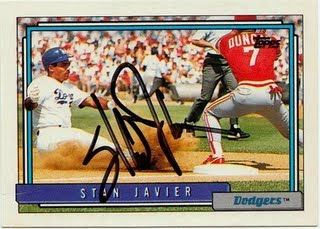 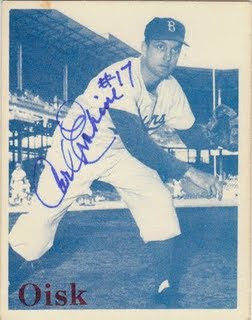 This is one of my most recent successful TTM attempts (it has been so long since I have attempted another TTM try. Just not feeling it right now). I like this one a lot because it's one of my favorite Boys of Summer, Carl Erskine. And it's a very cool, old card. A TCMA odd ball from 1974 that I picked up when I was a kid. 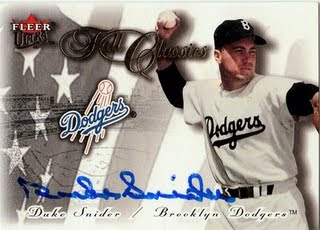 This was my second successful TTM try. None other than '50s Hall of Fame great Duke Snider. It's a great-looking card. I asked bloggers to choose which card I should send to Snider, and this was a great choice.
But those are NOT my three favorites.
How can that be, you're asking. It can be, because these be the three. You see? 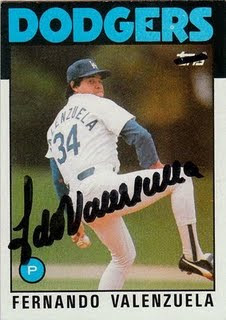 3. Fernando Valenzuela. A TTM try that was returned to me this past summer. What Dodger fan doesn't love Fernando. And his signature is fantastic. But the best part is he left me wondering by crossing out the Topps logo. Apparently he has done this regularly, but not all the time. And I've got no idea why. But it is now a card with a great story. 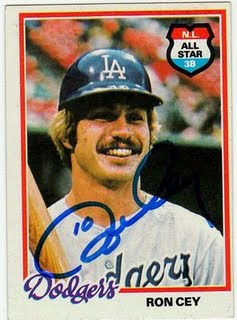 2. Ron Cey. This was my first TTM try, and it was insanely successful. My most favorite player ever returned my first TTM try in 7 days. That is unbelievably awesome. When your favorite player is so attentive to collectors' requests, it just makes you beam with pride. And what a fine autograph he has. I love that he only signs the "10" for cards of him as a Dodger. Special credit needs to go to Brian of 30-Year-Old Cardboard who got this project going. 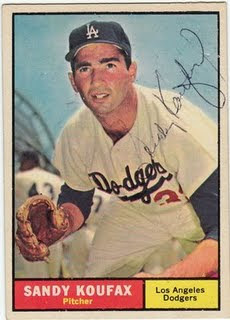 1. Sandy Koufax. I have no idea whether this autograph is legitimate. But it's Sandy Koufax, so I don't care. I bought this at a card show probably around 1980. Not many dealers were providing authentication with signed cards then. It was pretty much assumed that they were real. And I was a teenager when I bought this card, so I didn't ask for background on it. All I know is the signature certainly looks like Sandy's signature. And every time I look at this card, believe me, the signature is real.
The only thing that makes me question its legitmacy is Koufax is left-handed. If he were to sign a card as a left-hander with the card directly in front of him, as it is now, he would not sign it in the upper right-hand corner as it is here. He would sign it on the left-hand side, near his right shoulder or by his glove. I know this because I am left-handed and that's how I would sign a card (if anyone was dumb enough to ask me).
Now, that doesn't mean it's a fake. Koufax could have signed the card at an angle. If the card was sideways, with the right side of the card at the bottom, when Koufax signed the card, then his signature would appear as it does on this card.
As you can see, I've put some thought into this.
So, those are my three favorite ON-CARD autographs. They do make me smile when I see them.