It is appropriate that I am posting this after midnight because I received an ominous package in the mail earlier today.
It was my Trick-or-Treat mailing from Dave of Tribe Cards. I'm sure you've seen other tricky Tribe packages popping up on various blogs lately. Frightening stuff. Checklists. Ugly heavy metal singers. Andruw Jones cards (*shiver*). The horror.
But amid the gruesome carnage I noticed that a few good guys emerged unscathed: Harmon Killebrew, Greg Maddux. Guys like that. Maybe, just maybe, something unzombie-like would fall out of my package. I just prayed that whatever it was, it wasn't a Yankee. All hope is lost when one of those arrives in your mailbox.
I carefully placed the envelope on the table, you know, so as to not upset it. But my daughter tipped me off that something might not be right. She pointed to the written return address and said, "that person needs to take care of that."
I swear she said that. It pretty much creeped me out.
But I opened the package anyway. Yeah, I know. I'm like the teenagers who stop and ask for directions, or the girl who runs upstairs.
But seriously, I can handle it. I'm not a teenager anymore. And I'm not using illegal pharmaceuticals or engaging in, um, uh, you know, "baking cookies." Presently. So, how bad can it b ... 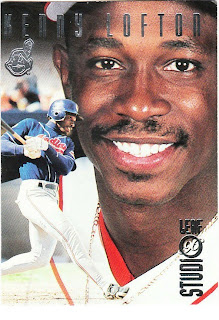 Oh, god. Not you. I've seen you before. You're '96 Studio Lofton. You're bad news. You're like seeing the disturbing circus clown at the start of Rob Zombie flick. It's all downhill from here isn't it?
I suppose I could turn around now and save myself. That would be the smart thing. The rational thing. It'd solve all my problems. It'd derail this twisted ride. Show's over.
Nah, I'll keep going. I'm invincible, right? What else is inside this thing? 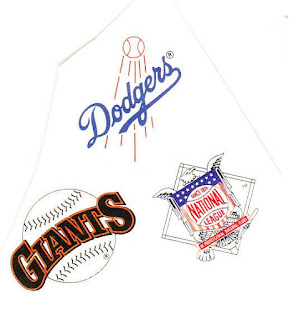 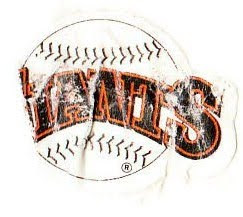 It's dead now. It can't hurt anyone anymore. And I'm not burying it in the backyard, or it'll just come back to life and terrorize everyone all over again. It's off to the paper-shredder instead.
Now, after all that, there has to be something good left. Someone always survives in these scenarios, right? The nice, pleasant character that everyone can identify with?
Let's take one last look in the package: 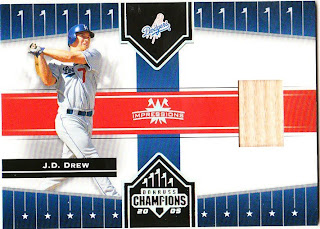 Phew. It's a Dodger. And it's a bat relic card. Oh, happy endings! See, I knew it couldn't be all tricks. Everyone else got a treat. I deserve a treat, too. Yay, Tribe Cards! Yay, J.D. Drew bat rel ...
Wait a minute. J.D. Drew? I don't like J.D. Drew. Did Dave know this? Of course he did. Nobody likes J.D. Drew. He's the walking example of the souless modern ballplayer. In fact he's so good at the part that I can't believe he hasn't played for the Yankees yet.
J.D. Drew is my treat? He's practically a Yankee.
This really IS madness.