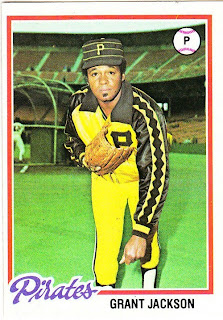 I came up with the idea for this post from this post. That's a lesson for all you young card bloggers out there: Read other people's card blogs! You never know where you'll find your inspiration. Or something to rip-off. Or plagiarize.

I'll begin with the absolutely bizarre jacket that Grant Jackson is wearing. A diamond pattern down the sleeves? Who designed that? Dock Ellis?

The Pirates were well-known for their wild uniforms in the late 1970s and early 1980s. In 1977, they unveiled five different uniform combinations that would replace the traditional home whites and road grays that they had worn for years. In the ensuing years, they would add more combinations and subtract others.

The colors were very loud, but it was the '70s, so that in itself wasn't wild. The A's had their green and gold. The Astros had their colors of the rainbow. The Padres willingly wore brown and yellow, and did not commit whoever came up with that concoction to the insane asylum.

Here are the seven:


I set out to find all seven combinations pictured on baseball cards. 1. Pinstripes: Here is Grant Jackson again, modeling the pinstripe beauties that the Pirates wore for their home uniforms between 1977-79. 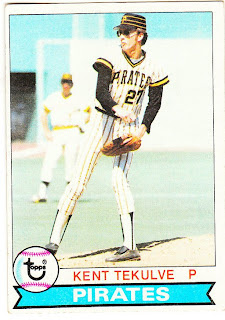 Kent Tekulve is also displaying the golden pinstripe look. The thing I find interesting with this card is the player in the background appears to be a San Diego Padre. He may or may not be wearing a fielding glove, I can't tell. But if he is, why would he be in the field when Tekulve is on the mound? 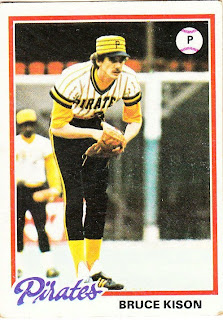 2. Pinstripe jersey, black pants: Bruce Kison is modeling the alternate home uniform for the Pirates between 1977-79. By the way, the second baseman behind Kison (is that Rennie Stennett?) looks absolutely forlorn in that get-up. 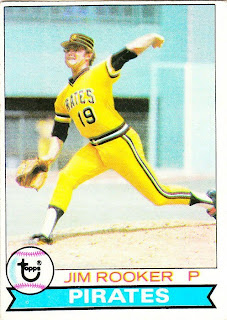 3. Gold jersey, gold pants: Uniform #3's objective was to make everyone look like a giant banana. No one looked good in these things, but apparently Pittsburgh didn't learn from Oakland and San Diego, which each did the same thing in the early 1970s. Shockingly, this combination lasted for seven years for the Pirates, one of only two combinations to be there at the beginning and the end. 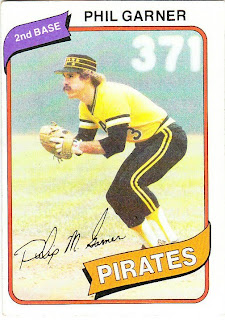 4. Gold jersey, black pants: This is the fourth of the five uniforms unveiled in 1977 and the only combination that debuted in '77 that was still around in '84. The Pirates wore it on the road. And speaking of the road, Garner's pants look like a winding byway through the Adirondacks. 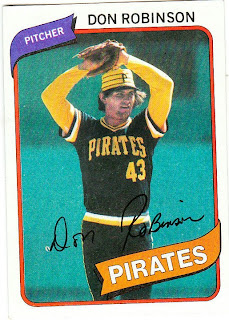 5. Black jersey, black pants: The last of the original five -- an all-black ensemble. These look more like pajamas than any of the other ones, but I thought the all-black uniforms rocked back in 1979. 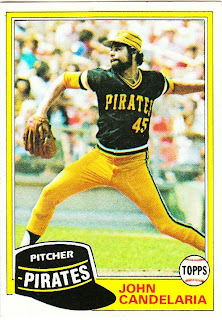 6. Black jersey, gold pants: In 1978, the Pirates debuted the black jersey with the gold pants. They scrapped it again for two years before it reappeared in 1981, and then reappeared again in 1983 and '84. (EDIT: Although some photo research shows they wore this combination during the 1979 World Series. Something to think about, Dressed to the Nines). 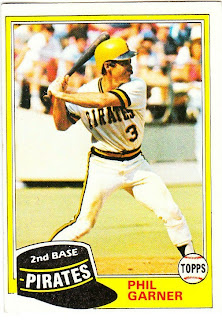 7. White jersey, white pants: This looks like what the Pirates wore before all of the wild color combinations came along in '77. These replaced the pinstripe jerseys as the Pirates' home uniforms in 1980 and are basically what Pittsburgh has worn at home (except for the recent "vest" jerseys) ever since.
Those, according to Dressed to the Nines are all the combinations the Pirates wore for eight years. It must have been hell on the equipment manager. I hope he was paid handsomely.
But I remembered there being even more combinations -- combinations I saw only once or twice back then. After looking at the Dressed to the Nines site, I thought maybe I was just imagining it. But then I found this card: 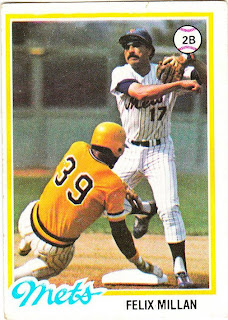 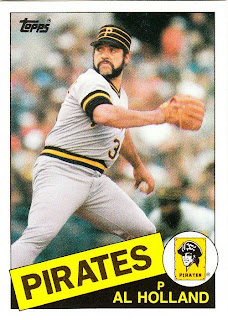 Looks kind of boring doesn't it? 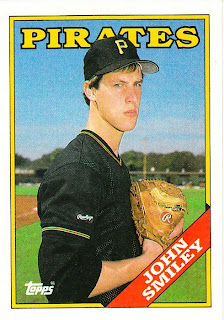 By 1987, the Pirates had even done away with the old-style square caps that they first wore in 1976 (unlike the Mets and the Cardinals, the Pirates kept their 1876-style caps long after the bicentennial).
It was a sad day. Look, not even Smiley is smiling about that.
The Pirates sure had some strange uniforms. But, man were they fun.

zman40 said…
They actually had a white tops and bottom combo in that timespan? Boring.

Anonymous said…
Actually, the Pirates wore the black top/yellow pants combo in 1979 in the playoffs and World Series (twice in the WS, once at home). The Pirates went to a solid white uniform at home in 1980 and that's all they wore at home. But they still wore the other black and yellow combos (all four possible shirt-and-pant combos) on the road through 1984. The yellow pillbox hat disappeared after 1984 when the Pirates switched to road grays. The black pillbox hat was retired after the 1986 season.
April 13, 2010 at 9:42 AM