November 11, 2009
(Happy Veterans Day! I salute my dad and all other veterans out there. I know there are several in the card blogging community. Bless you and thank you. You are appreciated. And speaking of appreciation, it's time for Cardboard Appreciation):

For Cardboard Appreciation Vote-Off #8, I expected this card to win: 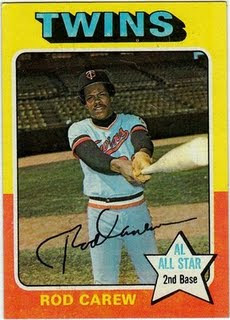 And it did win. It enters the list of finalists in the great Cardboard Appreciation Smorgasbord of Trading Card Wonderfulness.

But so does this card: 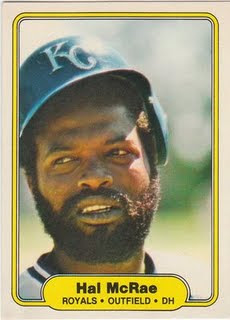 This card managed to tie Carew in the poll. It was a hard-fought battle throughout. Off-center McRae would not be denied. And the two cards ended deadlocked.
Here are the vote totals:
Rod Carew, 1975 Topps: 11 votes
Hal McRae, 1982 Fleer: 11 votes
Grady Hall, 1991 Line Drive: 7 votes
Ozzie Guillen, 1997 Stadium Club: 6 votes
Johnny Cueto, 2008 Stadium Club autograph: 0 votes
So, that means with the two additions I am going to end up with 10 Cardboard Appreciation Vote-off finalists as originally planned. So I'll be going back to that original plan for the finalists and pair them up two-by-two until I end up with a Final Five.
But before I do that, I must have Vote-Off #9. And I am bunching a few extra cards into this final vote-off.
Also, some of the card choices may seem kind of lame. That's because with some of the cards, the story behind the card is better than the card. So you might have to click on the links to get the full background.
Here are the candidates. Poll is up on the sidebar: 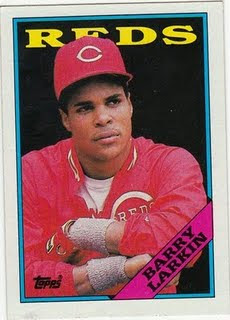 Barry Larkin, 1988 Topps: I may be the only one, but I think '88 Topps was a classy design, one of the best of the '80s. And Larkin was among my favorite cards in the set. 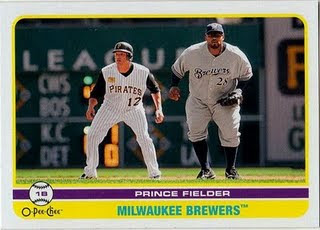 Prince Fielder, 2009 O-Pee-Chee: This card sums up how much I love baseball. I seek out games that feature the Pirates playing the Brewers. The more obscure the game, the better. 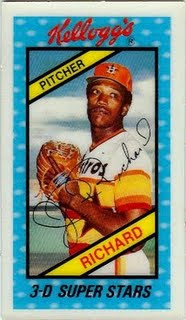 J.R. Richard, 1980 Kellogg's: How do you make a box of cereal cool? You're looking at the answer. 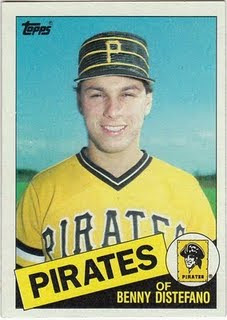 Benny Distefano, 1985 Topps: The last left-handed catcher to play in the major leagues. Lefties are a bit discriminated against in baseball, unless you can throw smoke -- and as a lefty, I'm mildly outraged. 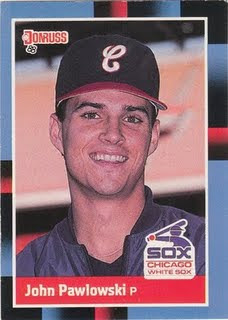 John Pawlowski, 1988 Donruss: Who knew that the kid in the grade ahead of me would end up on a baseball card? 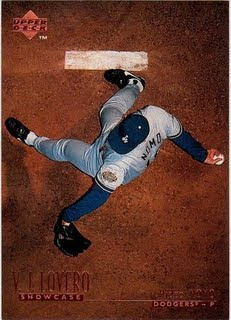 Hideo Nomo, 1996 Upper Deck V.J. Lovero insert set: I featured a bunch of Nomo cards on this post, so I picked the one I liked the best. 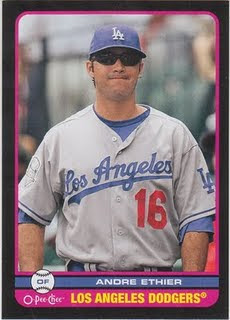 Andre Ethier, 2009 O-Pee-Chee black border: A quick-and-easy way to dress up a humdrum card: Slap a black border around it.
OK, this is your chance to round out the CA vote-off finalists! Which card will be the last to join the list? Do you care? You don't have to! Just vote. It'll get me off your back.

Play at the Plate said…
I'm going with J.R. for two reasons. It is one of the few Kellogg's cards I actually got in a box and that look on his face. I can just hear him saying, "Are you sure you want to crowd the plate? Ok, it's your funeral."
November 11, 2009 at 4:15 AM

Johngy said…
Can't vote for Benny D., as he replaced my favorite Mike Squires as the answer to that lefty catcher question.
John P. gets my vote. Schoolmates rock. So if you ever put a card of Erik Pappas, it will get my vote.
November 11, 2009 at 8:44 AM

dayf said…
Oh my GOD. Prince looks like the Stay-Puft Marshmallow Man on that card. Nomo's the nicest, but I refuse to vote for a man who thieved Chipper's ROY award.
November 11, 2009 at 1:31 PM

Jim from Downingtown said…
It looks like Hal McRae's helmet is popping off because he's leaning his head against the yellow box!
November 12, 2009 at 12:14 AM