Secondly, there will be a winner in the 700th post contest that I am currently holding. A few people have guessed at least one of the names correctly. People can continue to enter the contest for a week (see the sidebar to enter) and then I'll announce the winner.

I've written before that I have extraordinarily poor luck in pulling "hits" of my favorite team.

Since my return to collecting modern cards in 2006, I have pulled a Dodger autographed card and a Dodger bat card, and that has been it. Virtually all of my Dodger "hits," have been purchased or acquired in trades.

But the other day -- before the whole sickness thing set in -- I grabbed some random packs from Target that included three packs of Goodwin Champions. I was quite pleased with the results. 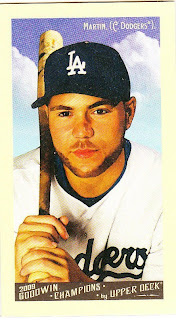 First, I pulled one of the two Dodger mini-exclusives, Russell Martin. I'm not much of a mini collector, but I need to collect every Dodger that is made. So when they produce a mini-exclusive, first I'm sad because there is no regular-sized card of the player, then I'm happy when I finally land the mini. 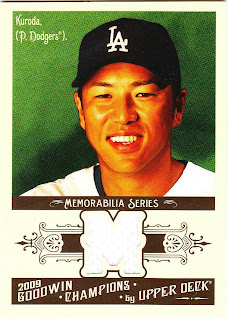 
And with this card, I have now completed the trifecta of Dodger pulls -- auto card, bat card, jersey card.


But I am curious. This year alone, I have pulled four or five (I can't remember exactly) relic cards of Angels. And in the past, I have pulled multiple relics of some other teams (Red Sox, Mets). So I am wondering, do fans of those teams have more success pulling relics/autos than other fans?


Are Angels fans constantly pulling "hits" of their favorite team?


I guess my question is, how successful are you at pulling "hits" of your favorite team?

Rod (Padrographs) said…
Since there are relatively few Padres hits, I have never pulled one. All of mine have come via trade.
November 4, 2009 at 4:08 PM

Nachos Grande said…
I believe I've pulled exactly ONE Reds hit...and it was in a repack box.

I seem to pull Dodgers like they are the only team in existence... I think I get the second most hits of Cleveland Indian players.
November 4, 2009 at 4:21 PM

madding said…
I don't recall ever pulling any Cardinals hits. I usually consider myself lucky if I get any base cards.
November 4, 2009 at 5:01 PM

gcrl said…
i once pulled a garvey auto from a box of fan favorites. now that is good karma in action!
i did pull a vladdy jersey last year, but usually i pull crap. and by crap i just mean non-dodger/non-twins/non-vladdy.
November 4, 2009 at 5:12 PM

BASEBALL DAD said…
I also, have bought or traded for,most of my Tribe relic cards.I think the odds of pulling a relic to begin with,coupled with the fact that we're looking for one specific team out of 30,makes it pretty difficult to hit our favorite team.You still get a little thrill when you pull a hit and with the blogosphere we can easily trade to get what we really want!
November 4, 2009 at 7:18 PM

Anonymous said…
I am O for my lifetime in pulling Brewers hits although I have considerable luck in getting Rockies...
November 4, 2009 at 8:41 PM

Anonymous said…
I don't think I've ever pulled a Mets relic or autograph. I think I've had the most success pulling Astros - I've gotten a couple of Bagwell and Biggio relics over the years.
November 4, 2009 at 11:31 PM

Twitch said…
I think I've only ever pulled about two Cubs hits, both from 2005 topps Pack Wars: that Lee Smith Fan Favorites auto, and a Sammy Sosa bat card. And the only Bears hit I've pulled is a Mark Bradley jersey from a 2005 Bazooka retail box.
November 5, 2009 at 5:19 AM