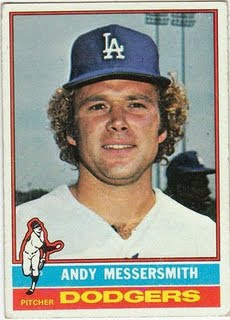 Did you know that Andy Messersmith was a Gold Glove-caliber fielder? I had no idea until a few moments ago.

I had read about the Dodgers placing two players on the National League Gold Glove team this year, and the article said it was the first time that the Dodgers had two players who had spent the entire year with the club on the Gold Glove team since 1975. I had Steve Garvey figured out right away as one of the slick fielders on that '75 team. But Messersmith came as a surprise. There is so much I don't know about that guy. Yet he's one of my favorite pitchers of the '70s.

But I have to say congratulations to the two players on this year's team: Orlando Hudson, who is probably playing elsewhere next year. 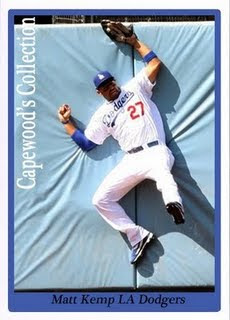 And Matt Kemp, who has very few cards picturing him fielding. Fortunately, I have this Capewood's Collection card sent to me by Cliff.
Now, normally, I wouldn't care about the Gold Glove Awards, which is one of the emptiest awards of the postseason, often going to a player based on past performance or even offensive performance. But I don't expect the Dodgers to win any other postseason awards, so I'll celebrate the few winners that they have.
Speaking of winners, you may remember that I was holding a contest in celebration of my 700th post. And it's time to reveal the winner.
The key to winning was to answer the following question:
There are three friends in my childhood that were key card trading partners with me. What are their first names?
The more names you got correct, the better your chances of winning. And in case of a tie, I would use the always trusty randomizing method to determine a winner.
Well, we did have a tie.
For a long time, I didn't think there would be a tie. That's because so many entrants guessed one name correctly -- and it wasn't always the same name -- that I thought surely someone would guess at least two correctly. But I waited and waited and waited, and no one could put two of the names together. Over and over, someone would guess one of them but not the others.
Also, several folks went to my post that I wrote about my sixth-grade class and the trading partners I had there. One of the people in my class was indeed one of the answers. But the others weren't. The other two correct names were much more key to my trading development than those sixth graders. In other words, they came along before I hit sixth grade.
I gave you a couple of hints. One was a boy who I had mentioned several times before. The other was a girl that I had also mentioned briefly. The other was a boy who had a name that could also be a girl's name.
Here are the correct answers:
Mario, Jennifer and Jamie.
Twelve of you guessed at least one of those names. Six guessed Mario. Three guessed Jennifer (I allowed Jenny, although we never called her that). Three guessed Jamie.
So, that means 12 people tied for first place. Here are the 12:
1. deal
2. White Sox Cards
3. Roof God
4. zman
5. laf
6. opoohwan
7. SpastikMooss
8. shahekee
9. Anthony K.
10. madding
11. AdamE
12. Eric
So, I hit random.org and randomized the names. And then I tried and tried and tried to get a screen capture of the results. But I'm computer inept, and could not get an image. You've never seen anyone press the command/shift/3 keys so many times. Trust me.
And that's what you're going to have to do when I reveal the results here, using my humble typing skills. I wrote down the randomized results generated by random.org and then retyped them thusly:
1. zman
2. opoohwan
3. deal
4. Eric
5. White Sox Cards
6. AdamE
7. Anthony K.
8. shahekee
9. SpastikMooss
10. Roof God
11. laf
12. madding
And that means the winner is:
ZMAN!
Congrats, Zach. You win the following two cards: 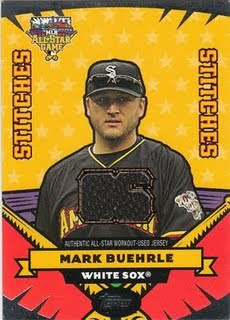 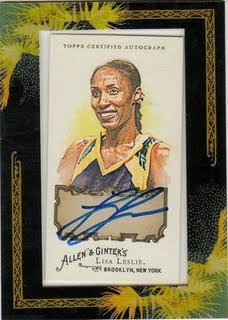 Plus, a few dollar bags of cards from the 1990s from my favorite dollar store, and a nice stack of players from your favorite team, which I know is the Royals. (You have no idea how glad I am that it's not the Mets or Indians).
Thanks everyone for playing. And congratulations again to Zach. 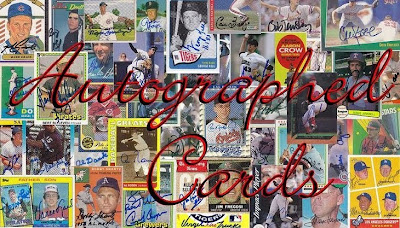 I'm sure I owe you some cards anyway.

SpastikMooss said…
I thought I had something for sure with that Gina thing. Not even close hahaha.
November 12, 2009 at 6:30 AM

zman40 said…
Sweet! I actualy had Jamie down, but I ended up going with Chris instead. Luckily, it worked out.