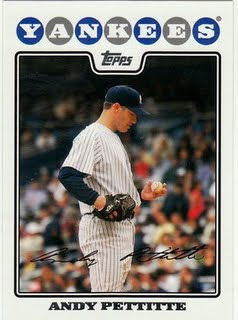 First off, I would like to say, a hearty, long-overdue, much-deserved congratulations to ...

Heh, heh. Don't worry. I'm not congratulating them. They'll be patting themselves on the back long into next year. They don't need me. So, instead, I've decided to ignore them. And it may last all the way through 2010.

(However, if I happen to hear one more Yankee say, "it's been a long time," I am going to set out to play every lottery and visit every casino in the country for the REST OF MY LIFE until I win enough to buy a baseball team. Then I'm going to pool my vast cash-laden resources with a few richy-rich Cubs fans who really know what "a long time" means, rename my club the Antiyankees, and make the team's mission statement as follows: "We will do everything possible to make sure the Yankees don't win again until every other team has won 27 World Series titles.")

No, my congratulations are going to the 2008 Topps set, whose design will now be known as the "circus circles" design. The name reflects the colorful backdrop behind the team name, which resembles old-style circus advertisements.

I think that's a pretty obvious name for the design, but if someone has something better, I'm listening.

I'd also like to hear folks' ideas for a design name for this set: 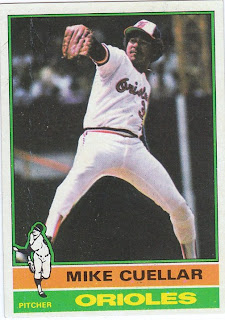 It's also a design that featured a tiny drawing for each of the positions. Perhaps a name focusing on the two-tone bars at the bottom works better for this set.
But that's what I'm looking for: a name for both the '73 and '76 Topps sets. I haven't come up with anything myself, so I really need some ideas.
No prizes this time, since there's already a contest going on at NOC right now. But I'm thinking of adding the names of the people who came up with the designs to my "Define the Design" sidebar. That means you have the chance to be forever immortalized on "Night Owl Cards." You know, like those paper shamrocks with people's names on them that they plaster all over the wall at Kmart around St. Patrick's Day?
Yeah, I know. Whoopee.

dayf said…
I called '08 Topps "Circus retro" when I first saw the design. http://cardjunk.blogspot.com/2007/11/2008-topps-sell-sheet-review.html That damn set has almost completely soured me on Topps' base set so now I'd call it mud.

I could be cynical and call '73 Topps "Horrible grainy action photo set" but that's not nice.


*American Sign Language; the image in the corner reminds be of deaf signers on a TV program
November 8, 2009 at 9:22 PM

SpastikMooss said…
As a former employee of Dippin Dots, I agree Nacho
November 8, 2009 at 9:51 PM

mmosley said…
The bottom corner of 1973 Topps reminds me of the opening credits of a James Bond movie, so I am going with "Baseball Diamonds are Forever"
November 8, 2009 at 10:28 PM

GCA said…
I call 2008 the Circus Balloons set.
After really looking at the 1973 design, I'd go for something like "Big Name Spotlight set" for the large last names and the position icon.
1976's color bands have become one of my favorite vintage designs. But the color bands set is kinda lame. Maybe the "Firm Foundation" set because of the solid base to each picture.
November 9, 2009 at 9:01 AM