What a prospector must feel

November 16, 2009
I am not a prospector. I think that's well-established by now. I can focus only on major leaguers, and a few minor leaguers from my favorite team. I have no time for anyone else.

So, I was leafing vacantly through some cards a couple days ago, looking for some cards for a trade, when I came across this card: 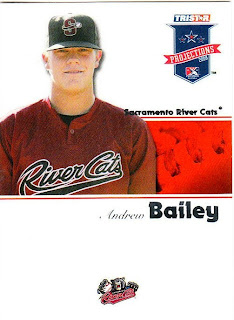 "Holy smokes, I know him," I thought. "That's the next American League Rookie of the Year."

Now, it was a nice surprise for me. But when I think of it, I suppose a prospector wouldn't get the exact same feeling. He'd know all about Bailey already and probably had known who he was when Bailey was in high school. He'd certainly have more than this one, lonely, base card of Bailey. The news of Bailey's award might be the prospector's cue to start selling his cards.

But, for some reason, I prefer to wander cluelessly through my collection some days, looking forward to what card can surprise me this time.

Captain Canuck said…
I was leafing through some '91 Classic Best cards before recycling them, and found a Jim Thome from whatever minor league team he was on at the time.

SpastikMooss said…
wow...looovvve that feeling. I
m hoping to do some prospecting when I finally go to my parent's house around christmas and dig through my old cards.
November 16, 2009 at 5:22 PM

Anonymous said…
The prospector probably would have been unloading his Andrew Bailey cards for a while now to take advantage of the building hype.