Thought bubble of the week 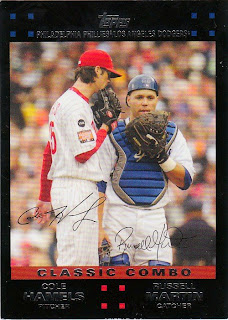 "Cole, you just hang in there until the sixth inning, buddy. We'll tee it up for you." (Apologies to Phungo, which posted this card earlier today).

Phillies 3, Dodgers 2. Geez, what happened to Derek Lowe in the sixth inning? He acted like he got served with paternity suit papers between innings. Even in the fifth inning he started behaving all squirrely, like he had spotted the paternity server in the stands. Before you knew it, bombs from Utley and Burrell, and the Derek Lowe face was in full effect.

And, Raffy, I'm so disappointed.

Manny Ramirez and Blake DeWitt, you're excused. The rest of you must stay after class and write 1,000 times, "I will not let fools twirling snot rags throw off my concentration."

Dinged Corners said…
Those towels need to be banned everywhere. They are annoying and worse yet, cheesy looking. Soon there will be landfills piled to the stratosphere with those things.
October 10, 2008 at 12:19 AM

deal said…
No apology needed for the card. It's a great shot.

as you know I am a Phils fan - so I am much happier with how things went....but I will agree with you about the rally towels.

I was at the game and they were very annoying...even for Phils Fans. 1) people wave them mindlessly and hit you in the face 2) they are really cheap so they shed. 3) my big one: you can't SEE when everybody is waving them in your view. very very annoying!!
October 10, 2008 at 12:25 AM

night owl said…
Yeah, I was picturing myself in the stands at the game, trying to watch the action, getting wacked in the eye, feeling my blood pressure rise ... Good times!
October 10, 2008 at 12:44 AM

madding said…
Somewhere I have, or had... a replica "homer hanky" that I got from a Portland Beavers game following the year the Twins won the World Series (1987). The Beavers were the AAA affiliate. But that stupid towel thing should have ended there.
October 10, 2008 at 6:52 AM