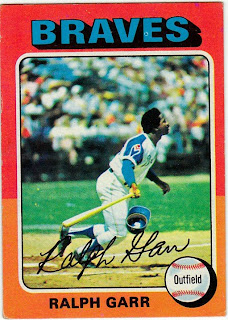 I just came home from work, but before I could get home I had to clean at least six inches of dense, heavy, wet snow off my car. If you live in the Northeast, snow is a way of life, but a bleeping N'oreaster in October is WAY too much WAY too soon.

But it got me thinking about other "snow jobs." For example, my personal experience with the 1975 Topps Ralph Garr. When I was a youngster, this was one of my all-time favorite cards. I first spotted it during my first trip to the Baseball Hall of Fame.

For all of you readers, who when I mentioned the snowstorm, thought, "I'm glad I don't live THERE," here's another thing to think about: I've been to the Baseball Hall of Fame at least six times, probably more. That's one of the wonderful things about living in the Northeast. Cooperstown is right around the corner. And as my boss, who has lived in a variety of areas in the country, says, where we live, we can resolve most of our weather disasters with a shovel.

OK, tangent over. There are three things I remember about first going to the Hall of Fame. (I was probably around 10 years old). The first thing I remember is my youngest brother getting car sick. The second thing I remember is spending time in a podunk laundromat while my parents cleaned my brother's clothes and being fascinated that you could purchase a can of spaghetti from a vending machine.

The third thing I remember is the huge display of every 1975 Topps baseball card at the Hall of Fame. Forget the bronze plaques. That's what I remember. And I especially remember the Garr card. I thought the photo on that card was as awesome an action shot as there ever was. The Roadrunner about ready to take off! And he don't need no stinking helmet.

I wanted that card so badly that I sent away for it out of some collector magazine. And I enjoyed that card for years.

Then, decades later, when I got back into collecting, I decided I wanted to complete the 1974 Topps set, the first set I ever saw. I started out with only a handful of Dodgers, and card by card collected the entire set. But along the way I saw this: 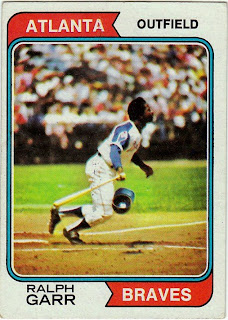 Wait a minute! Isn't that exactly the same photo as the one in the 1975 Topps card? Now, I had been fully aware for years that Topps was known for repeating the same photo from year to year, especially in the 1960s. But when I saw this card, I felt tricked. Topps had snowed me! I compared the cards side by side, hoping that Topps had used at least a different frame. But the '75 card wasn't an original at all. Garr had played this scene once before! I know it's silly, but the 10-year-old in me couldn't help but feel a little hurt, like they had pulled a fast one on me.

So there you go. Now that's a snow job. One that was about 30 years in the making.

--David said…
Man, I even compared helmet location, tip of the bat... I was hoping that under today's microprocessing power, I would zoom my way into the picture only to discover they were taken one shutter-click apart... Alas, dayf is right - they just cropped it closer to the player... Bummer.