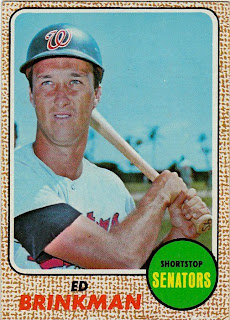 Ed Brinkman, a heck of a fielder but not much of a hitter, died on Monday at age 66 of a heart ailment, according to friends (wikipedia says it was lung cancer complications). News of his death was released Wednesday.

Brinkman was a Cincinnati kid and a high school teammate of Pete Rose. He played mostly for the Senators and Tigers. He was one of those starting shortstops that could probably only exist during the 1960s and '70s (other examples: Mark Belanger, Enzo Hernandez). He hit .224 during a 15-year career.

Ah, the good old days, when gas was cheap, music was groovy, and Topps' errors were unintentional.