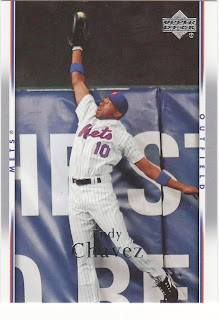 I know the Dodgers are 17 hours away from their biggest game in 20 years, but I'm still in a Cardinals frame of mind.

Which may lead you to ask why one of Cardinals fans' LEAST favorite moments is being displayed in this post. Wasn't this the Chavez catch off of Scott Rolen in the sixth inning of Game 7 of the 2006 NLCS? Didn't Chavez then convert the catch into an inning-ending double play?

Well, yes and yes. But, admit it, it's one of the best catches you will ever see in a postseason game. I'm not going to dive off the deep end like some New Yorkers and proclaim it the greatest catch ever, but it's in rare company. And, secondly, Cardinals fans, you know what happened three innings later. Things turned out pretty well, didn't they, Yadier?

2007 Upper Deck featured several cards from the all-night playoff series between the Mets and Cardinals. It'd be cool if there was more of that in future sets (I've seen very little of Upper Deck's base set this year, so I don't know if they did the same with the Rockies-Diamondbacks or Red Sox-Indians).

Meanwhile, I'll post something about the Dodgers after I get a good night's sleep. Today was too depressing. I'll leave you with all the players/coaches/managers -- past or present -- I could find who have either gone on record as saying George Kissell made a difference in their careers or praised Kissell for his impact on baseball:

I'm certain there are so many others because Kissell basically taught everyone who came up through the Cardinals organization in the last 68 years.

And here's a little video snippet of George at spring training in 2007.

madding said…
Amazing play. That was the only point in the entire playoffs where I started to feel some doubt about whether the Cards would pull it off.

I've enjoyed the fact that a lot of the 2007 sets feature photos from the 2006 playoffs (both the NLCS and World Series.) It's a welcome change than the spring training photos that have always bothered me. I wonder if it's typical to use playoff photos these days.
October 9, 2008 at 5:15 AM

deal said…
I would love to see more playoff photos. I mean if you can make a series with every game at Yankee stadium, why not 20 or 30 featuring the playoffs.

There is a series of cards in Upper Deck Vintage I thin 2001 was the year that are called Night Gamers. Those are some pretty good night shots.
October 9, 2008 at 2:04 PM

night owl said…
Cool, deal. I didn't even know UD Vintage had something like that. I'll definitely have to check that out.
October 9, 2008 at 2:41 PM

gcrl said…
i've pulled a few night shots that i think you would like, plus some dodgers. send me your address and i will get them out to you.
October 9, 2008 at 9:35 PM