Should've been a 'night card' 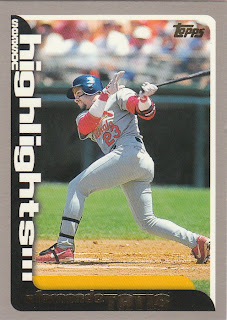 As a collector of "night cards," I'm always on the look-out for cards that show players competing in a night game. As I mentioned before, there aren't a lot of them, probably because:

But I think the card companies should present more night game photography if only to accurately represent the realities of the game. Most games are at night now. It's been like that for quite some time.

For example, the card above should have been a "night card." The card, from the 2000 Topps set, commemorates Fernando Tatis' feat of hitting two grand slams in the same inning against the Dodgers (I'm still trying to forget this). On April 23, 1999, the Dodgers shockingly let Chan Ho Park load the bases in the third inning, give up a grand slam to Tatis, give up another home run to Eli Marrero, load the bases AGAIN, and give up the second grand slam to Tatis. THEN they took Park out.

The Cardinals won that game 12-5. It's burned in my brain. And I'm well aware that it happened on a Friday NIGHT. So, why, oh, why, does this card show Tatis playing during the day?

Should've been a night card, guys.

tastelikedirt said…
Long story short. Photography is all about light. The more the better. Less light=more expensive equipment to get a lesser quality photo. They get lazy and do it during the day.
October 18, 2008 at 11:12 PM

tastelikedirt said…
They've come a long way, check out the "in action" Topps photoa from the '70's. That crap would not even make it on to a card now a days. Technology has been getting better.
October 18, 2008 at 11:15 PM