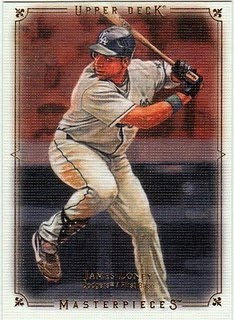 Maybe this doesn't happen to everyone, but it did to me. At some point in my life, probably during my adolescence, I arrived at a vision for what my life would be like as an adult. I would have a house and a car, a wife and children, a dog and a decent job. I loved sports at the time, and I figured I'd still enjoy them as an adult, but maybe not quite as much. When I was old enough, I'd find more mature pursuits. I'd golf, or sail, or carve wooden ducks or whatever greeting card companies are always depicting as Mr. Dad-ly pursuits on their Father's Day cards.

My vision came true, for the most part. I have a beautiful and sweet wife and a nice home and a decent job. I'm an adult. Have been for awhile. I'm old enough to have a daughter who is old enough that when she's in the living room and the TV's on, I cringe when the endless Viagra and Cialis commercials pop up between innings of a baseball game.

But that's the thing. I'm not watching golf, or sailing or wooden ducks on parade. I'm watching baseball. And more of it than ever. My interest in other sports has declined, but I can't get enough of baseball.

I said in the previous post that I wouldn't be watching the Dodgers-Cubs playoff game because I would be at work. But that didn't turn out to be true at all. There is a TV near my desk at work and usually I'm much too busy to watch what's going on or even to turn it on. But Wednesday night I could barely keep my eyes on my computer. When DeRosa hit that home run, I saw it and groaned. When Loney hit the grand slam, I saw it and leapt from my chair. By the time Manny hit his home run, I was in the best mood I'd been in all day.

How childish is that?

Part of it was the way in which the Dodgers played Wednesday. This must be what it's like to be a Yankee fan. Lots of offense, enough quality pitching, and shutting up the opponents' fans so quickly and so fiercely that they don't know whether to hate you or cry. It was such a relentless display that I couldn't contain myself. And what's more, my work didn't suffer. In fact, I was probably more efficient (at least after the game was over).

So here's to Loney, and to Manny, and to my favorite Dodger, Russell Martin, who also hit a home run Wednesday to give the Dodgers just the fifth three-home run postseason game in team history (they've hit four homers in a postseason game twice).

The Dodgers last night brought out the kid in me that has never gone away and never will. In fact, Loney's big bomb to center field, reminded me of a childhood memory.

The last Dodger to hit a grand slam in a playoff game was Dusty Baker.
Johnnie B. Baker Jr. hit it in the fourth inning of Game 2 of the National League Championship Series against the Phillies in 1977. The Dodgers won 7-1.

I remember it well because that was the game I begged my mom to let me watch instead of eating dinner with the family. She wouldn't let me. We were having something to eat that I loved, probably something Italian -- coming from a good Italian home. But I choked that food down so fast that I felt ill later that night. I tore into the living room so quickly, just in time to see Jim Lonborg give up that homer to Baker.

I leapt out of my chair that day, too. Thrilled to be a Dodger fan, thrilled to watch baseball.