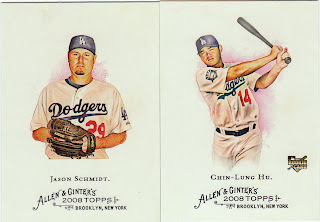 But I definitely felt like a psychiatrist during my card transactions, because the dealers were in a venting mood. They always seem like the anxious, nervous sort, but they seemed even more anxious-er and nervous-er than usual. One dealer that I always go to totaled up my cards, gave me a price, gave me a bag and then walked away without taking my money. (Don't worry, I flagged him down). One dealer moaned endlessly about the economy and thanked the Lord above that he wasn't relying on his card sales to feed his family. One dealer told me it was the worst October show he'd ever been to in years and years of going to October shows. Then he told me a happy story about getting two flat tires on two separate occasions on the way to one of his October shows. That experience, he said, was better than Sunday's.

So, that put me in a festive mood. I look forward to these shows for months and these people WERE BRINGING ME DOWN! Fortunately, a giant convention hall filled with cards is the perfect cure for the blues, so I was back to my happy self in no time.

I went to the card show with two purposes: first, to GIT cards for myself, and second, to find cards for other bloggers. I was semi-successful in both areas. Money was tight, and I ran out before I could find everything I wanted, but I'm happy with my purchases.

What I'm going to do is show you what I bought for myself in part 1. I'll post part 2 on Tuesday (I know it's Tuesday already. Later Tuesday. I'm off, so I'll probably be posting late evening some time). Part 2 will feature my gift purchases and the small contest I'm going to run. Neither the gifts nor the contest are elaborate at all. But I've got to start somewhere.

Anyway, this is the breakdown on what I bought for my collection:

I'll start with the A&G. The two Dodgers at the top of the post are the last two Dodgers I needed for the base set. Schmidt is a short-print. The Hu card isn't, but I had a hell of a time finding it. 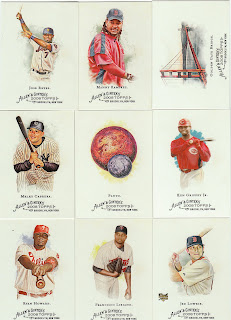 All told, I tracked down 35 A&G cards that I needed all at one table, and all for less than the cost of a blaster. This means that I now need just eight cards to complete the base set.

Here's what I need:

If you have any of these and want to trade, shoot me an email or leave a comment. And let me know what your card wants are.

For the rest of the show, I stuck with vintage cards more than I thought I would. Vintage cards are like comfort food for me. And part of the vintage quest is getting cards in as perfect condition as I can. I'm not a maniac about condition, but I like my complete sets to look nice. I've collected the entire 1974 and 1975 Topps sets, they have a lot of meaning to me as they're the first two card years I ever collected as a kid, and I want them to be nice.

So I grabbed a few decent-looking '74s and '75s. You wouldn't believe (well, maybe some of you would) how long it takes to get quality cards of some of the most common players. For example, Dick Woodson: 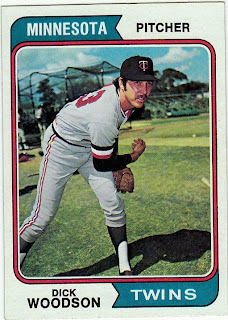 I FINALLY got a respectable card of this guy. It's taken FOUR years of staring at my creased, rounded-cornered Woodson before I could find this one. Dick, you'll be happy to know my obssessing is over.

I also try to grab some '71 Topps each show, because I foolishly think I can complete the whole set. Here is some of what I bought Sunday: 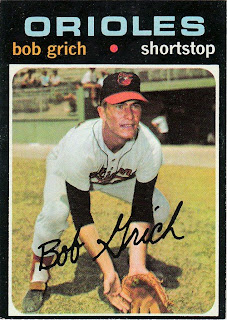 Bob (or Bobby) Grich. My three favorite non-Dodger players as a kid were Grich, Garry Maddox and Tom Seaver. I once changed my favorite team from the Dodgers to the Mets for one day after I received a baseball glove for my birthday, because it had Seaver's stamped autograph in it. I always secretly hoped that Seaver would be traded to the Dodgers (there was a lot of talk that he would be back then). 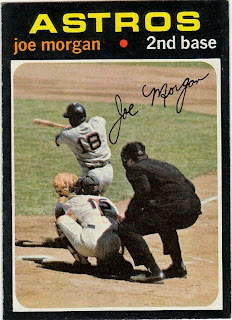 Joe Morgan. I've passed on this card several times, even though it features one of the many odd action shots that I love about this set. I cannot stand Morgan, and unlike a lot of people, it didn't just start when he became the world's most annoying TV baseball broadcaster. I disliked Morgan when he was player.

He played for the hated Big Red Machine, he played for the Astros team that beat L.A. in the 1980 special playoff, and then he went to the Giants, where he filled me with rage in 1982 when he hit that homer to knock the Dodgers out of the playoffs as he PUMPED HIS FIST in the air while going around the bases like he FORGOT the Giants were STILL in freaking third place, whether he hit the homer or not. So, yeah, I don't like my Morgan cards much. 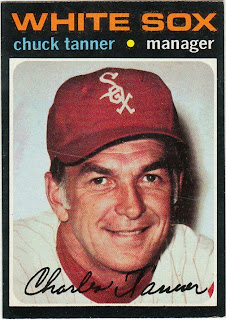 Chuck Tanner. This is the only high number I picked up this time because I was trying to stretch the wallet. I find it sort of freaky that Matt F. of the wonderful Heartbreaking Cards of Staggering Genius was at a card show the same weekend as I was and picked up the EXACT SAME CARD. (cue organ music). 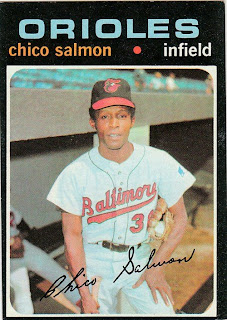 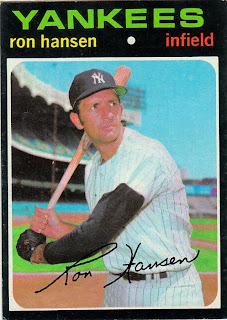 Ron Hansen. I bought this card because for a long time he was the last guy to turn an unassisted triple play. Wikipedia says he was scouting for the Phillies as recently as 2007. 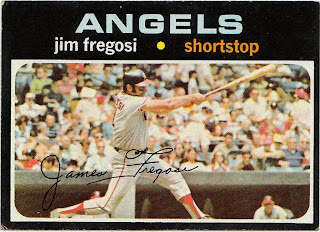 A funny thing happens to me when I see 1970s action cards at card shows. I get so wired about them that I forget that I already have the card. I already have this fantastic Fregosi item. So, Matt F., if you need it for your 1971 collection, it's yours. I'll find some other cards you need and ship it off to you. Just let me know. 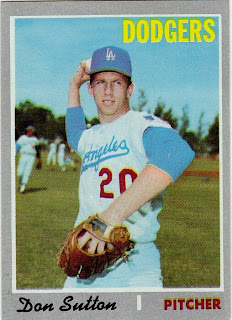 I saved my favorite card for last. I bought this from the "flat tire sob story" guy. It was well worth it. This is the last Dodger card I need from the 1970 set. It's a high number, but I collected most of the other Dodger 1970 high numbers awhile ago. This one just avoided me. It's headed for a happy place in a nine-pocket sheet, lower left corner.

Dinged Corners said…
1971 sure is a beautiful set, and it looks as though you managed to find cards with smooth unchipped black edges. Also, looky, you got Pluto! A & G greatness.
October 21, 2008 at 11:30 AM

Anonymous said…
How about for us new to reading your blog, where did you go? I am guessing somewhere near NYC, based on your profile looking at various show listings would it be in Atlantic City. Here to think the emails I keep getting I thought that was an antique show. I am in Upstate NY, just south of Syracuse.
October 21, 2008 at 8:58 PM

stusigpi said…
That is a sweet Don Sutton. Funny thing, they were showing highlights of the Dodgers and who did they show? Ron Cey literally waddeling his way home. It was hilarious. Never make it in the game today, shame.
October 21, 2008 at 10:05 PM