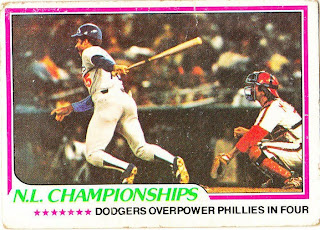 Since last night's game reminded me so much of the Dodgers' Game 2 victory over the Phillies in the 1977 NLCS, I thought I'd post this awesome night card. Note the word "overpower" in the blurb. A little like last night, huh?

This photo is from Game 4 of that series, the clinching game for the Dodgers, played on a Saturday night at Veterans' Stadium in Philadelphia. Note that the Dodgers are wearing the road unis. Games 3 and 4 were in Philly, but Tim McCarver, pictured here, didn't catch in Game 3.

Also, this photo appears to be of the first at-bat of the game, a lineout to second base by the Dodgers' leadoff batter Davey Lopes (Lopes walked during his other two times at-bat when McCarver was catching).

The Dodgers won 4-1 on that day, Oct. 8, 1977, to advance to the World Series for the second time in four years. Then Mr. October and his cronies had to ruin everything.

Play at the Plate said…
Knowing the "moment" that the card photo was taken gives life to the card. Thanks for making me think about the pictures on the card and also give new appreciation to cards like this one.
July 14, 2009 at 4:47 AM