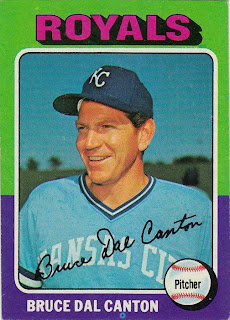 Bruce Dal Canton, a former major league pitcher in the 1960s and '70s, died Tuesday at age 66 of esophageal cancer. Dal Canton pitched for the Pirates, Royals, Braves and White Sox between 1967-77. He was working in the Braves organization as a pitching coach until last May. Before his baseball career began, he was a high school teacher (wow, that'd be freaky if one of my high school teachers ended up pitching in the majors -- especially now, since most of them are probably in their 60s or, um, dead).

I have no memory of Dal Canton. But I do have a memory of acquiring his card, the 1975 Topps card you see above.

But that isn't the original version of the card I obtained. The original has been around the block a few times.

It is one of the cards I received in the first trade I ever made. It was with my friend, Mario (no not that Mario). I've updated the card for one in better condition (as I have with all '75 Topps - the first set I ever collected), but I've hung onto the old one.