Cards and cards from Cards on Cards 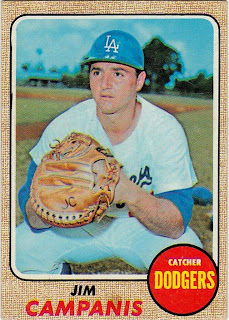 What? I enjoy alliteration. Even if it is merely using the same word over and over.

I just completed a team trade -- Cardinals for Dodgers -- with madding of Cards on Cards and A Pack a Day. Team trades are the best, because each of you get nothing but cards you want. Even if you get dupes, you don't mind so much (or at least I don't). I live on one side of the country and madding the other, so these Cardinals and Dodgers each took a transcontinental journey.

The Cardinals and Dodgers have been fairly regular trade partners over the years. Joe Ferguson for Reggie Smith (advantage Dodgers). Pedro Guerrero for John Tudor (advantage Cardinals). So it makes sense that their fans should swap cards.

Among the cards I received on Thursday were five different Brad Pennys and four different Jeff Kents. Maybe madding's a closet Dodger fan? Or more probably he just has loads of cards.

Here's a look at the L.A. highlights, obtained all the way from Oregon Ducks country: 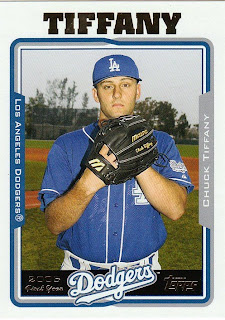 Hey! Let's start with yet another former Dodger farm hand who is now a member of the Tampa Bay Rays! The Rays are getting like the Padres were in the 1970s, swooping up all of L.A.'s players. Except the Rays actually know what they're doing. Tiffany was part of the trade that sent Edwin Jackson to the Rays, and of course, Jackson got to the World Series faster than almost anyone currently on the Dodgers (Kent, Penny, Lowe, ManRam, of course, all played in the WS for OTHER TEAMS). 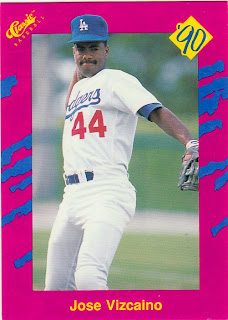 Woah! Headache-inducing colors! I love it. This card is like Saved by the Bell, Full House, Kid n' Play and the Fresh Prince of Bel Air all rolled into one. I can see Vizcaino joining Jesse and the Beach Boys for a Full House episode-ending rendition of "Kokomo."

As you probably can tell, I didn't collect many Classic cards. I've GOT to get more (I actually received another one in my Trick or Treat package from the Halloween Santa, David of Tribe Cards. I'll post on that soon). 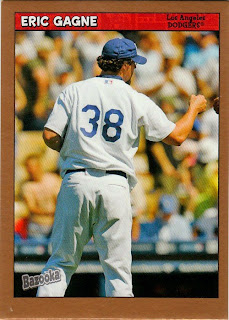 This is the thickest card that I've seen that did not include a "game-used piece of memorabilia that has been certified to us as having been used ..." You know the rest. But no swatch, not even a piece of Bazooka bubble gum squeezed between the cardboard. 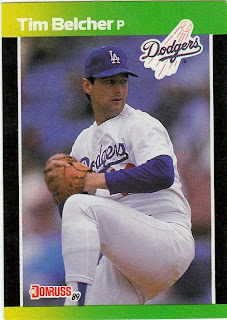 OK, this is where my cluelessness about cards comes in. This looks like the usual 1989 Donruss card. But the back looks like this: 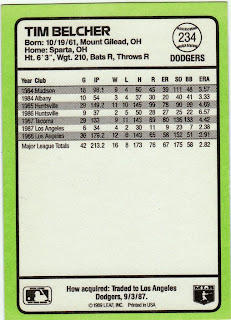 That's not the back of a 1989 Donruss. I received several O-pee-chee Dodgers from madding (thanks a bunch for those!), but those usually have French on the back. Anybody know what the deal is? 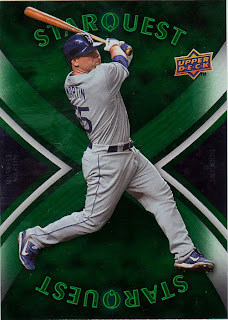 This is a terrific shiny green card. Green looks great on cards for some reason (except 1994 Topps, yuck!). And this is what I'm talking about when card designers decide to take the players out of their natural backgrounds. I'd prefer that they didn't, but if they do, make it something snazzy-looking like this. To me, this year's Upper Deck SP Authentic just doesn't cut it. Unless the card is autographed, the UD-SP-A is just dull. 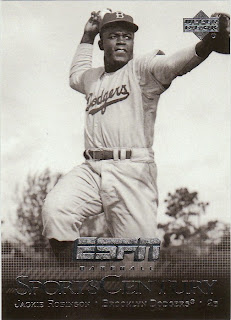 Normally, I spit on anything ESPN (ptew, ptew), but then they go and pair themselves up with Jackie. I can't help but like this card. 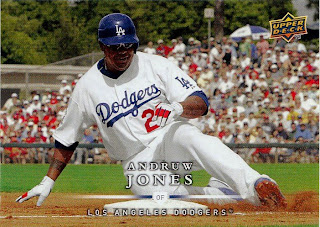 I love the background. I love the camera angle. I love the action. It's the subject that needs to be cropped out. 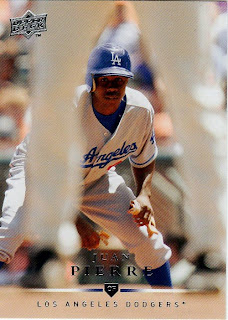 Again, a fantastic shot wasted. Pierre's not awful and he knows how to steal, but a shot like this needs to be reserved for Rickey Henderson. 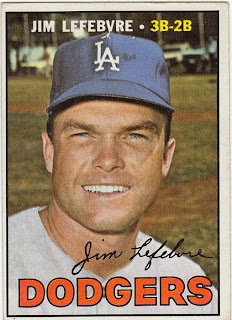 Finally, this beauty. The 1967 Topps set is one of the great "clean" sets of all-time. I already have this card and the 1968 Topps Campanis card at the top of the post, but madding has introduced me to a new concept: doubles of 1960s cards. Sweet!

Thanks, madding. Check out his blog. Especially if you're a Cardinals fans.

madding said…
Baseball's Best was a product designed for retail stores and was sold only as factory sets. It originally began its life as Opening Day in 1987 (w/ the famous rookie year Bonds error card) but I'm guessing Donruss just got lazy and ditched the idea of putting out a card for every player who was in the opening day lineup and just opted for a smaller version of the regular base set with no particular theme. By 1989, they had even ditched the glossy coating, but that set is known... I guess... for having Sammy Sosa's only 1989 major league card (as a member of the Rangers.)

That's probably much more than you ever wanted to know. For some reason I have a lot of oddball Tim Belcher cards.
October 27, 2008 at 2:34 AM

Andy said…
I love those Donruss Opening Day / Baseball's Best sets. Seeing a similar design with a different photo for each player was cool. (For those who do not know, the color scheme for the sets was based on the regular set from that year but changed somehow. In 1988, for example, they replaced basically blue cards with basically orange cards, but otherwise the same design.)

This was a precursor to today's parallel madness, but without all the ridiculous rareness of all the variations, etc.
October 27, 2008 at 5:06 AM

capewood said…
Several people beat me to explaining the 1989 Donruss Baseball's Best set so I'll tell my story about the 1987 Donruss Opening Day set. I bought a factory set on eBay 5 years ago. At that time the Bonds error card was booking at $300 (still is in fact). I paid under $20 so I thought it was a good price. Needless to say, I didn't get the error card, but there were two Bonds cards (and someone else missing) in the factory sealed set. 5 years ago, the Bonds card was booking at $20. I see its down to $12 now. What ever happened to that guy anyway?
October 27, 2008 at 5:59 PM

stusigpi said…
Seems that Viscaino is doing his best Fred McGriff Impersonation. Way to wear that hat. Good news is Vizcaino found him some work as McGriff's stand in on those Tom Emansky instructional video endorsemant spots
October 29, 2008 at 3:02 AM