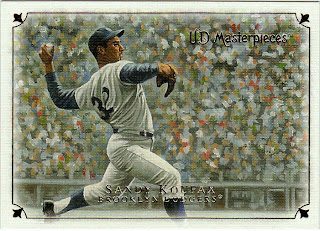 Isn't that an amazing card? Wow, I can't get over how much I like this card.

The kind, talented folks at Dinged Corners sent this card over, along with a few other treats as part of their "We're Organized!" party. Card bloggers across the nation are benefitting from their "down with clutter" stance.

This card, of course, is from the 2007 Upper Deck Masterpieces set. I'm on the fence about Masterpieces. I've mentioned before how I'm not crazy about cards that feature paintings instead of photographs. I'm a stickler for accuracy on my cards, and sometimes the paintings miss the mark. But every once in awhile a card like this one comes along, or this one, and I. Must. Have. It. I guess that's the beauty of artistry. When you hit a home run, you really hit a home run.

The card above reminds me of this photo: 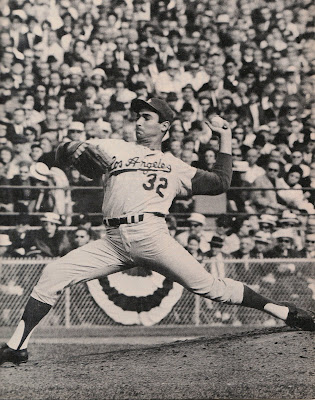 That's Sandy during the 1965 World Series, which the Dodgers won over the Twins. The photo is from the 1966 Dodgers' yearbook, and it's one of my favorite baseball photographs. You can see, just from his motion how difficult he was to hit and also how much every pitch took a toll on Sandy's arm. I often think about how long Koufax would have lasted had he not had to retire in 1966 at age 31. He could have pitched another eight or nine years. Wouldn't it have been cool to have a 1975 Topps Sandy Koufax (an actual card, not those MVP things)?

Koufax's biography was one of the first ones I read as a kid. I remember devouring it in the fourth grade. My fourth grade was different than others. They were experimenting with classrooms back in the '70s and our fourth grade class had no desks. Classes were taught while the kids sat on the floor. Sometimes we'd sit at tables with other kids, but desks were nonexistent. There would be some individual cubbyhole type set-ups off in corners of the classrooms, and during "reading time" I would head to the quietest, darkest corner and read about Koufax.

I don't remember much about what I read. But I added to my knowledge on Koufax a couple years ago by reading this book: 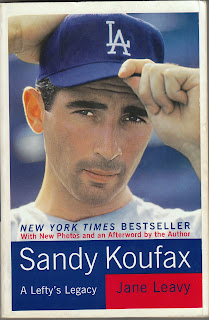 It's quite good. Leavy did loads and loads of research and talked to just about everyone imaginable -- except Sandy. He didn't want to talk. He was pleasant about it, as usual, and he and Leavy seem to have a good relationship. But I don't know if I'd do a biography on someone if I couldn't talk to the subject of the book. Still, a very informative and interesting story.

Back to the card. One thing that bothers me about it is the logo on the back. It doesn't exactly fall under the label of factual flaws that have hurt Masterpieces the last couple years, but it is annoying nonetheless. 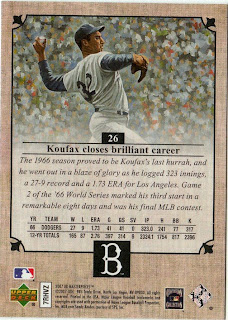 The write-up is all about Koufax's final season: "Koufax closes brilliant career." And his 1966 stats are there. But UD ridiculously slaps a Brooklyn logo underneath the stats. (And the front of the card says "Brooklyn Dodgers" for some odd reason). The Dodgers had been in L.A. for nine years by the end of 1966. Not to mention that Koufax's Brooklyn days were nothing to brag about. Good thing the rest of the card is brilliant.

DC sent along some other vintage-y type cards: 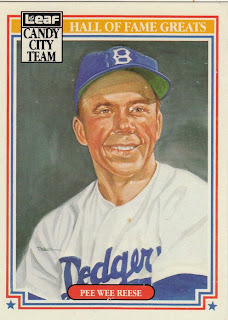 I'm not sure what the "Candy City Team" is. Sounds like a Willy Wonka and the Chocolate Factory softball squad. But I sure do like a card of The Captain.

Patricia and Lucy are thoughtful folks. And Patricia's older daughter sent along a perfectly drawn "horse card" for my daughter, based on this post. My daughter loved it. It's up in her room right now.

I don't think I can express how much I enjoy reading Dinged Corners. I guess I'll just say this: there are a lot of baseball card blogs out there. I like just about all of them, and I read a whole bunch of them. Some of them are quite unique and they have a good thing going. They are either ground-breaking or well-written or family friendly or rabble-rousing. Some of them are my favorites, and those I have listed as the Blog All-Stars on my sidebar.

But there are only two blogs that I can say that when they don't post for the day, I genuinely miss them. The day is not as bright. One is Cardboard Junkie and the other is Dinged Corners.

For what it's worth, guys and gals.