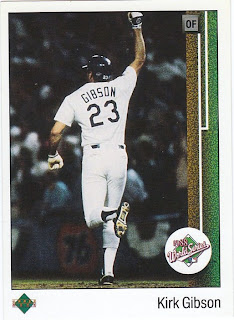 Twenty years ago to the night -- Oct. 15, 1988 -- Kirk Gibson hit one of the greatest World Series home runs in history. Here, on a card from the 1989 Upper Deck set, he is featured beginning his victorious trot, after depositing an offering from Dennis Eckersley in the right field seats.

I remember that night well. I was in college, and I was visiting at my grandmother's with my girlfriend. My parents were in town and this was one of the first times my girlfriend had met my parents. She and I were getting serious as a couple and this was a big moment.

The game was on in the other room, but the Dodgers had given up four runs in the second inning, seemed hopelessly behind with their pop-gun offense, and family issues seemed much more important. After a great Italian dinner, and a lot of talking, my girlfriend and I prepared to leave for her mother's house. I took one last glance at the score: it was 4-3 Oakland going into the bottom of the eighth, and I knew Eckersley, who was absolutely unstoppable in '88, would be making an appearance. We said goodbye and left.

Upon arriving at my girlfriend's mom's, I noted the time, figured the game would still be on, and flipped on the TV. I was shocked instantly because Gibson, who had been ruled out of the game from the beginning, was heading for home plate with a bat in his hand. My girlfriend wasn't a baseball fan, but we both sat down and watched what figured to be a poor, pathetic display.

Of course, it turned out to be one of the most memorable at-bats ever. I don't remember what I did when Gibson hit the home run. I'm sure there was a lot of jumping and yelling and kissing involved.

(What do you remember about that game? Where were you?)

Everyone knew it was a historic moment when he hit it. But it's interesting to see how much the home run has grown in the last 20 years. It, along with Joe Carter's homer, is probably the greatest World Series moment of the ESPN era, and that's certainly helped seal it in the minds of many fans.

Twenty years later, my girlfriend is my wife. I'm still waiting for the Dodgers to win their first World Series since 1988. I can't help but think a similar scenario could still present itself during this postseason. Jeff Kent may not be injured, but he is cranky just like Gibson could be. He does get in disputes with his teammates, just like Gibson did. He is a veteran like Gibson, and he has been pinch-hitting this postseason since Blake DeWitt's taken over at second.