Spirit of the season 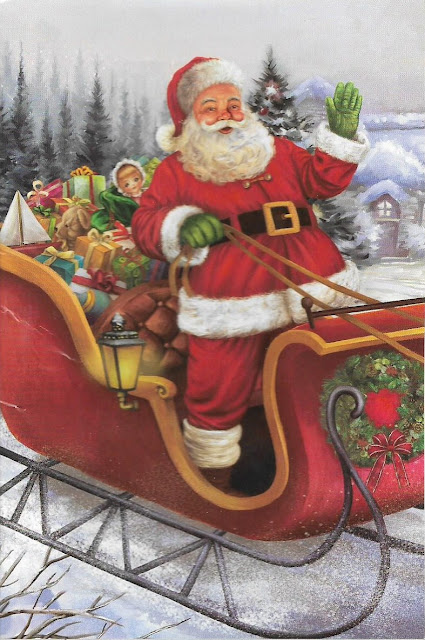 On the day after Christmas, I backed out of the driveway, turned to my right, and spotted a Christmas tree in a snowbank in front of a neighbor's house.

This always depresses me. I hope that people who dispose of their tree the second it's not Christmas day have an allergy problem or the tree was a firetrap or something rational other than "I'm done with Christmas, bring on the dullest part of the year!!!"

I'm one of those loonies who wants Christmas to last forever, or at least the 12 days that are sung about in the song. I want my ladies dancing and drummers drumming. Right now, for me, is the Christmas season. There are still Christmas cookies in the house, lights shining outside and those cloying Lifetime Christmas movies airing around the clock.

Properly extending the Christmas season also gives me the perfect excuse to show some festive packages that were sent with the spirit of the season in mind that I mostly received before Christmas. 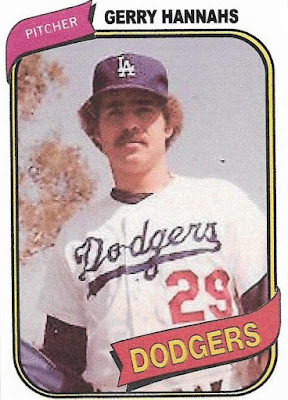 Rod of Padrographs sent this custom-made card of former Dodgers prospect Gerry Hannahs. I had lamented that Hannahs had never made a Topps card despite repeatedly being advertised in Dodgers publications as a top prospect.

Until this card arrived, using the 1980 Topps design, I was content to collect minor league cards of Hannahs. 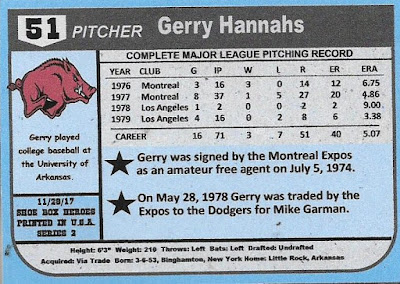 This showed up a couple of weeks before Christmas and I consider it a thoughtful, one-of-a-kind Christmas gift. Complete major league stats and everything. 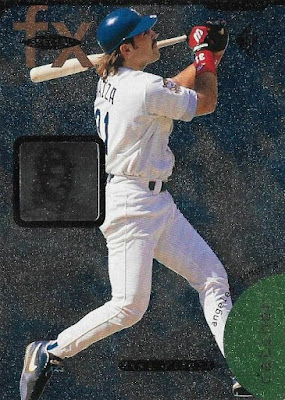 Here is another pre-Christmas one-card mailing, this time from Mike Matt of Summer of '74. He spent a post featuring a bunch of mid-1990s SPx cards and this Mike Piazza insert caught my eye.

My mom would tell me I need another Piazza card like I need a hole in my head, but, mom, this card shows Piazza smiling at you if you tilt it! (There are also several Piazza cards featuring this same Piazza creepy holographic smile).

When I mentioned that I was interested in the card, Matt sent it right out. That was a very Christmasy thing to do. 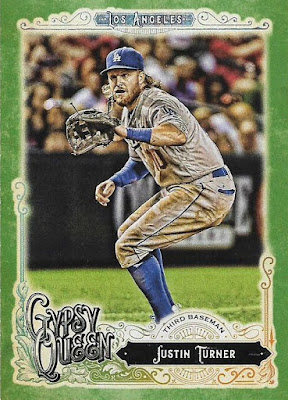 We've been talking about this card for a few months but neither of us has any time for this hobby. It's ridiculous that we're even doing any of this collecting stuff. Finally, in a fit of getting something done before the holidays, Scott sent me a bunch of his want lists and said "pick a card and send it for the green Turner."

Easy peasy and merry Christmas. The card is mine. 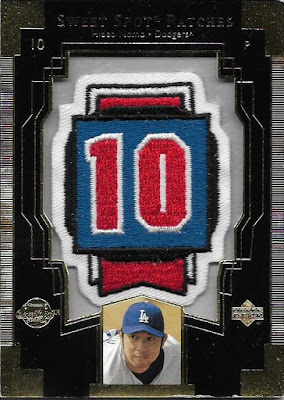 This card comes with a nice Christmas story but not the greatest ending.

It seems that Bert from A Swing and a Pop-Up was shopping for his Secret Santa recipient when he spotted this Hideo Nomo Sweet Spot patch card and thought of me, shipping it in the mail. I swear I could hear Christmas bells when I opened the envelope. That's how much Christmas spirit was in it.

Unfortunately, I do own this item already. 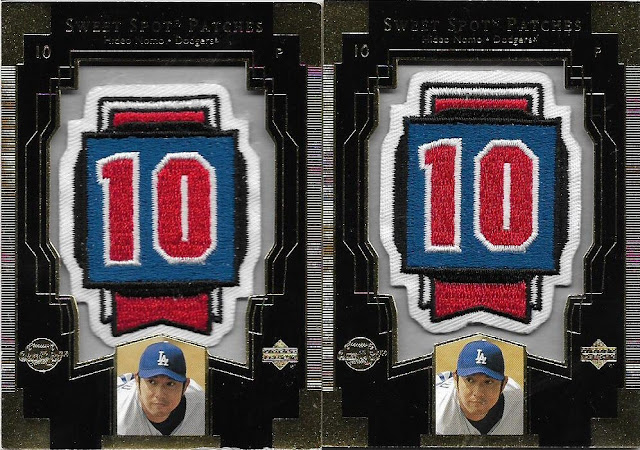 So, I have two of them now, but not for long. I'm sure I can find a Dodger fan who needs one of these. 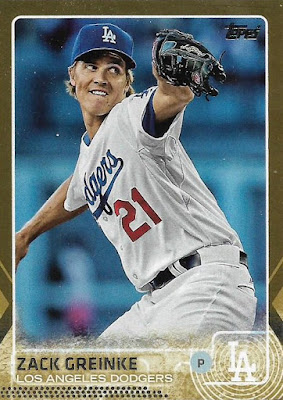 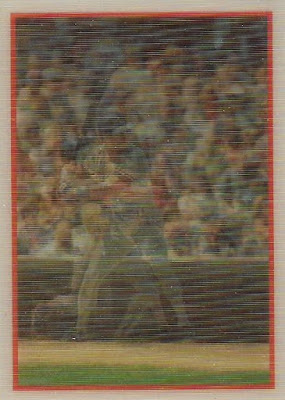 The Christmas card at the top of the post came from Mike at Not Another Baseball Card Blog. (I would like to say that two of the three Christmas cards I received from bloggers this year were from Canadians).

He added a smattering of Dodgers cards and hoped I needed some. I'm happy to say that I needed the above two cards. The Steve Sax Sportflics card (trust me, it's Steve Sax) is especially exciting because who knew I still needed cards from 1987?

Finally, here is one last nice gift that sums up the season.

You may remember the most recent World Series, a knock-down, dragged-out, exhausting battle between the Dodgers and the Astros.

Before the Series began, I placed a wager with known Astros fan, Sam, of The Daily Dimwit. I don't normally wager, but with the way the Dodgers were playing in the postseason -- and all year really -- I couldn't refuse.

Well, the Astros won in seven games and it was as painful as could be. I dutifully found some Astros cards to send, hopefully items Sam can use. He surprised me by saying he had something to send me. 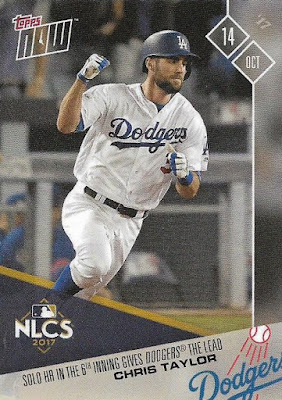 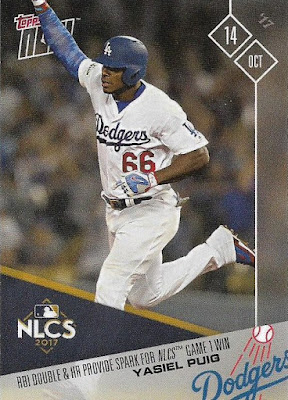 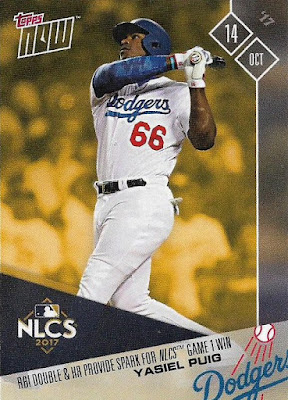 Inside were three Topps Now cards commemorating the Dodgers' Game 1 victory over the Cubs in the NLCS. (The second Puig card is some sort of colored variation that I've seen with Topps Now postseason cards).

These were very cool as I'd like as many of the cards that commemorate the Dodgers in the 2017 postseason as I can get, but don't want to pay inflated prices.

The other item in the package came straight from Dodger Stadium. 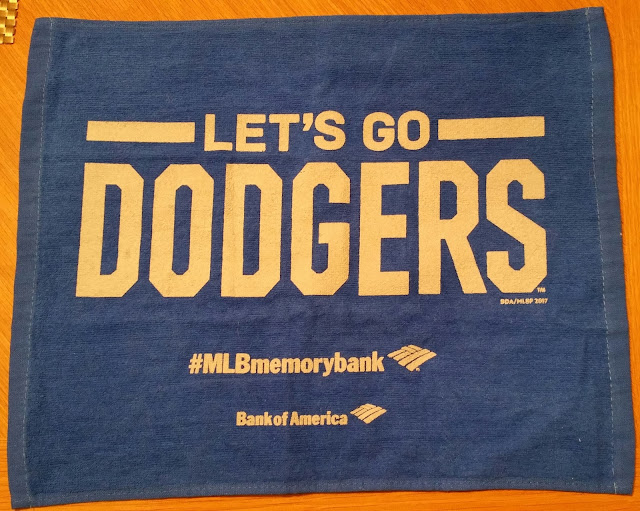 It's a rally towel that was handed out for Game 6 of the World Series (I don't know why the letters look orange, they are gray on the towel).

That's awesome. Even more awesome that the Dodgers won that game.

I know that Sam went to Dodgers Stadium for the game and I'm sure an Astros fan had no use for this. But I really appreciate that he didn't cut it up in little pieces but kept it intact for me.

That is the Christmas spirit right there.

Many thanks for all of your gifts this season. I have several people on my list that need packages from me. I hope to get to that in the next couple of days and weeks.

Enjoy the rest of the season and New Year's festivities. We have 350 other days of the year to be miserable.

Once a Cub said…
My neighbors went to visit family this week before school starts up again and our trash day was Tuesday so they did the same thing with the tree.

The yellow Puig was a freebie bonus for buying an NLCS card. I got the same one for buying a Cubs one. Ugh.

I think sales were down overall per Topps Now card because they offered various incentive based freebies for their Spring Training and Player's Weekend team sets. Trying to curtail resellers maybe?
December 30, 2017 at 8:26 PM

Mike Matson said…
I'm glad you needed a couple of them.. :)

J-Mac said…
We keep our Christmas going until after the New Year holiday. Great cards and the dodgers towel is awesome.
December 30, 2017 at 11:40 PM

carlsonjok said…
Our Christmas tree was taken down and put in the burn pile the day after Christmas. Mainly because our kitten was destroying the damn thing. The cat is a menace, I tell you.
December 31, 2017 at 9:34 AM

Fuji said…
I have a friend who leaves most of their lights up and on until the February break, while my best friend's family took down their tree the day after Christmas. I guess both are extremes, but I lean closer to the latter.
December 31, 2017 at 11:48 AM