Building up the want lists to knock 'em down 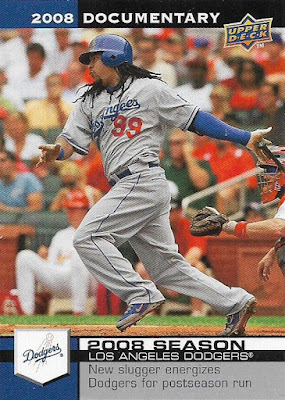 My want lists rehaul has been going on for eight months since a crash erased them back in April and I decided to revise the way I listed them.

It's very tedious work, even more tedious than cataloging cards. It's difficult to get myself to update them. So I continue to apologize to anyone who has looked at them in the last eight months and can't find any listings for loads of sets.

But it's no picnic for me either. One of the great advantages to having want lists is crossing off card numbers when you obtain the cards. I can't tell you how much joy I get from crossing wants off.

OK, actually, yes, I can tell you much I enjoy it.

This is how much:

A week or two ago I received a bunch of cards from Jon of Community Gum. He is one of the few collectors I know who is interested in the Upper Deck Documentary set that was issued almost 10 years ago. The execution on that set was so off the mark that Documentary belongs on the island of misfit sets.

But thank goodness someone is collecting it because I received a boatload of Dodgers from that set. As you know, there is a card for every game played by every team in 2008, meaning there are lots of numbers to cross off.

But in my want list upgrading, I hadn't created a new Documentary want list yet. This made me very sad. Think of all the crossing off! Minutes of fun! And I was missing out!

So I did what any obsessed collector would do: I found my old want lists at web.archive.org and copied the Documentary list into my new want list file. Then I prepared to delete numbers! LET THE FUN BEGIN!

Here are the wants that Jon helped me cross off: 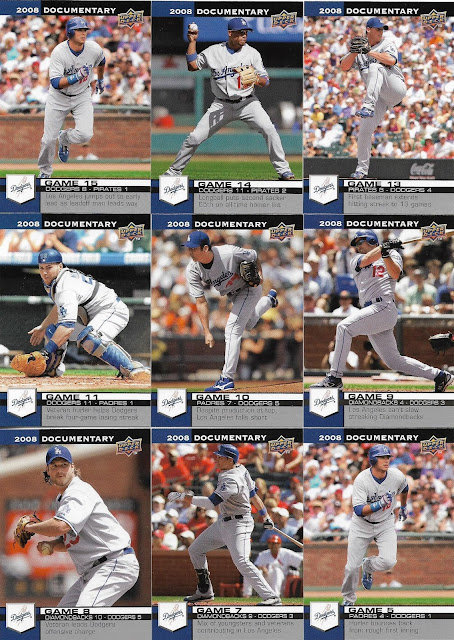 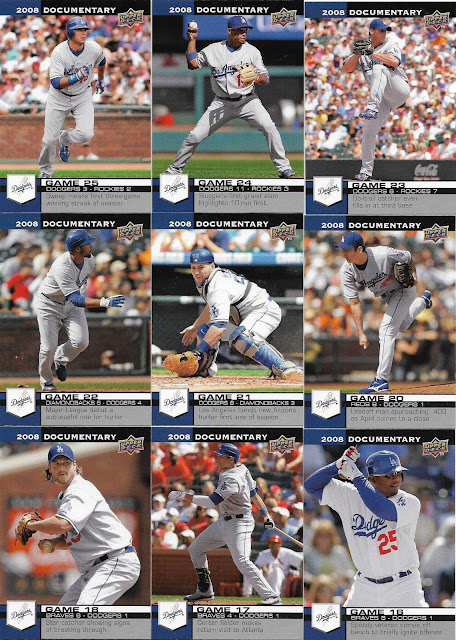 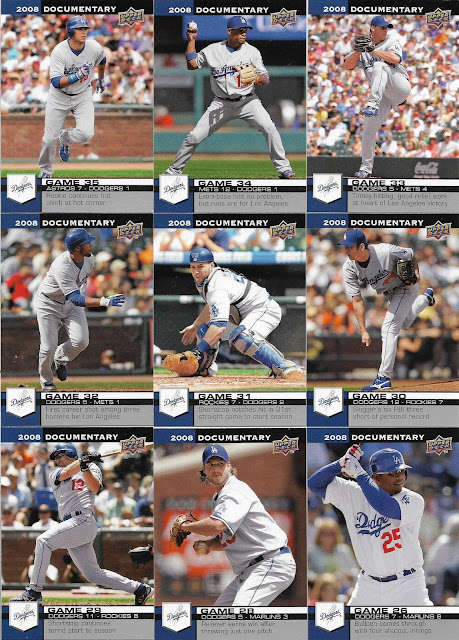 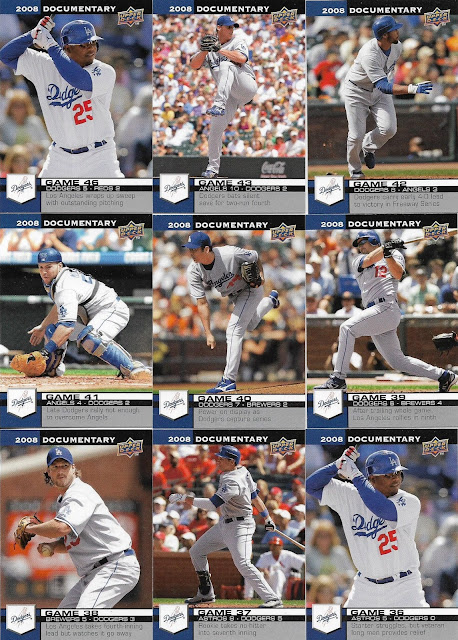 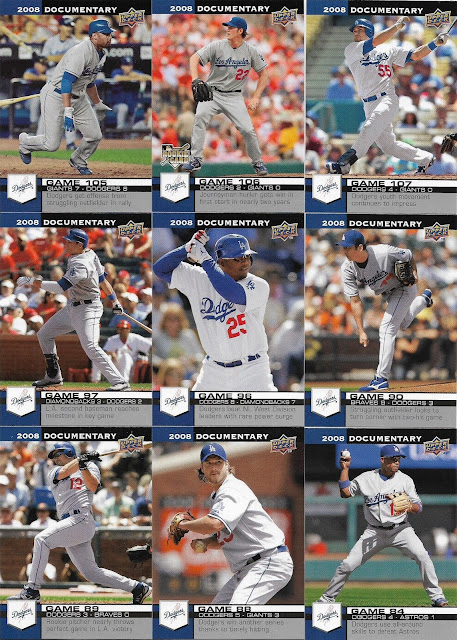 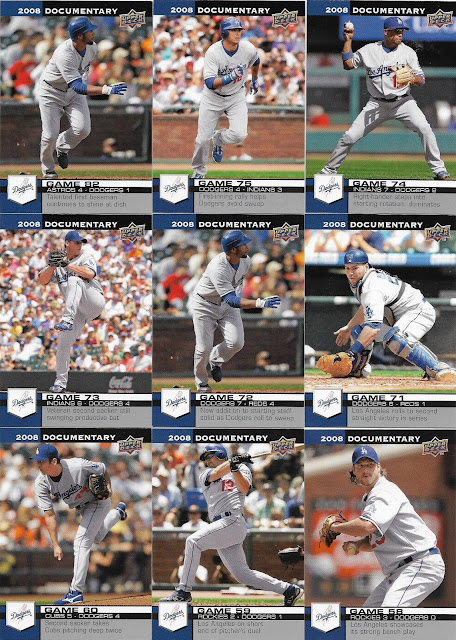 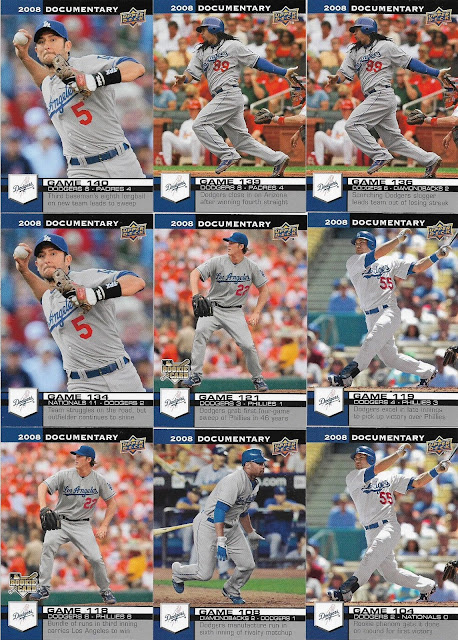 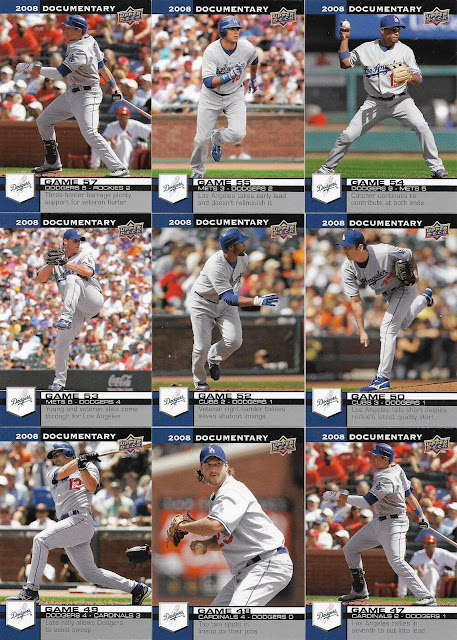 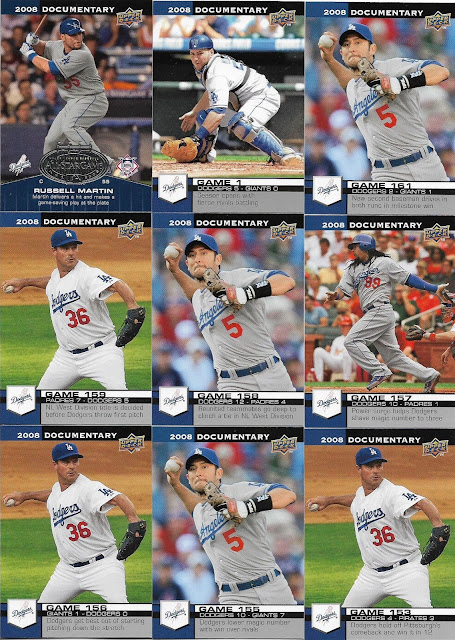 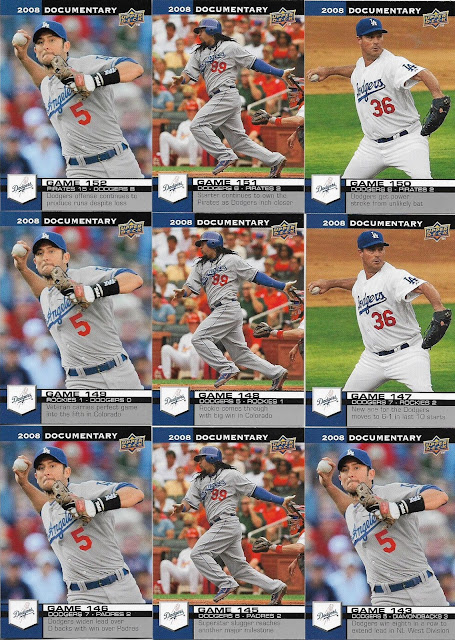 That was a hoot to check off, but admittedly kind of mind-numbing to view. So much repetition.

But because it's a set from 2008 I was able to land several Clayton Kershaw rookie cards. 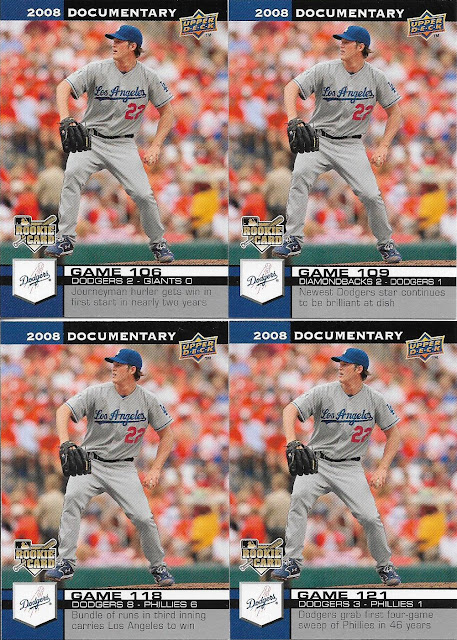 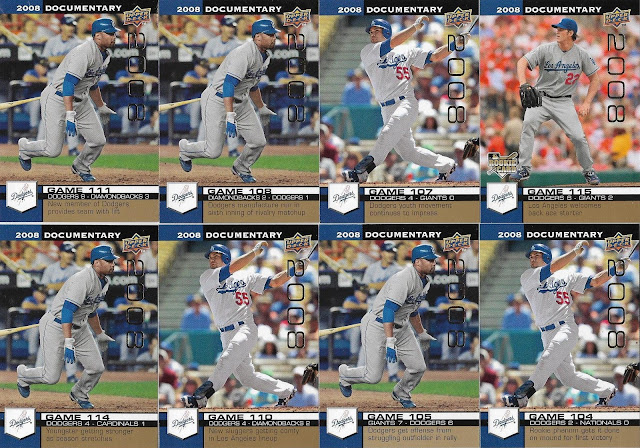 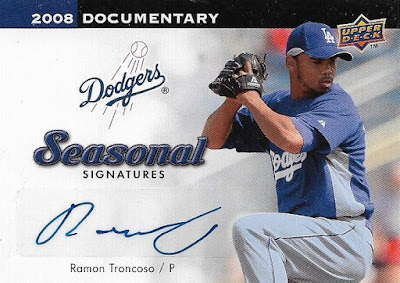 Jon was able to pull a Dodger autograph, too. Ramon Troncoso autographs were all the rage in 2008. I'm pretty sure no one except Dodger fans who were collecting in 2008 remember Ramon Troncoso.

But autographs are a mere sidelight when Documentary is involved. Getting that team set complete is the thing.

This set is so daunting and ridiculous that team collectors just want to get it over with, but it sits on their want lists forever because who has the incentive when every eighth card is Andruw Jones or Jeff Kent with the exact same image?

Thankfully, Jon was there and my want list went from this:

(I bet half of those left are Kershaws).

I know that there are other team cards in Documentary that I don't have listed, like the postseason cards -- I'm glad the Dodgers made the postseason in '08 because at least it's a year worth remembering.

And there are all those ridiculous gold parallels, that I probably won't ever put on my want list.

Between this set and the 1000-plus Target Dodgers that I received a couple of weeks ago, I have a huge backlog of cataloging projects that should keep me busy for the next three months (and I don't even get one of them mid-winter breaks).

But it all balances out because I was able to cross off a bunch of wants.

And Jon was able to get rid of a bunch of Documentary.

TSHenson said…
I will look at your wantlist for Documentary and see if I can help you out with any. Jon was a big help to me as well with my team set of the Indians from the Documentary cards. I am done to 6 cards to complete my team set.
December 22, 2017 at 8:16 PM

steelehere said…
I never realized how lazy Upper Deck was with their Documentary set. I get (I guess) not using a photo from each of the 162 games played during the season but using the same photo of a player for every time he's featured is just pathetic.
December 22, 2017 at 11:31 PM

Johnnys Trading Spot said…
I doubt that I will ever come close to getting My Braves team set built.
December 22, 2017 at 11:39 PM

Nick Vossbrink said…
Holy crap all that photo reuse is so bad. Though I can't help thinking that this is kind of the conceptual direction I wish Topps would go with ToppsNow.
December 23, 2017 at 5:59 PM

Fuji said…
UD Documentary could have been a very cool product had it actually used photography from each particular game. It was kinda like an early version of Topps Now.
December 23, 2017 at 6:39 PM