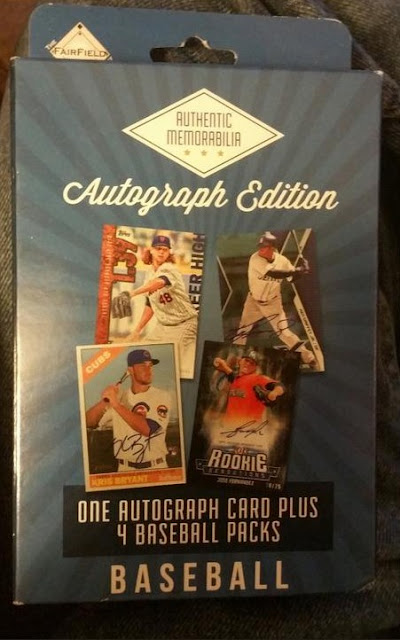 I was supposed to take at least two days off from this blog so I could travel in order to enjoy some more holiday merriment.

However, I live in lake-effect snow country, which, every year means: "here comes a storm that we didn't know about even 12 hours ago and it's going to dump 3 inches to 3 feet on you depending on your 'locale' and, oh, by the way, if you're driving, you're F'd!" This is the message that travels across the bottom of your TV screen in lake-effect land, except they don't use "F'd," they use the actual word. ... or maybe that's just the vibe I get.

So, we had to cut our merriment in half and I have returned safely to the home nest, and, lucky you, you get an extra blog post out of this affair -- I'm going to tell you how I got scammed over my Christmas vacation. Well, actually, my sister-in-law got scammed, but there's no way I'm telling her that.

My sister-in-law bought a bunch of cards for me from the nearest Target card aisle. These are dismal times for card availability at the local card aisle so just about everything that I received was 2017 Topps flagship and Update product. It's the only baseball cards on shelves anywhere. If I don't stand a chance of finding anything good, my sister-in-law definitely doesn't.

But she gave it a shot by also grabbing one of those Fairfield "autograph edition" hanger boxes.

I normally stay far away from these boxes, because, really what good can come of it? A signed Kris Bryant card? No way that's coming out of that box. This is the card world's version of click bait. But somebody buying it for me is a different animal. Why not? Just give me a moment to brace for my Jeremy Giambi autograph.

If you've ever bought one of these, you know they're a bitch to open. There are two side panels glued to the back of the box and that's the only way to open it unless you stab the center of the box open with your pocket knife like an angry psycho.

But I finally got one of the panels open and was immediately confronted with what appeared to be white wrapping paper. When I pulled the paper off, I realized it was actually two small, plain, white envelopes that were housing the LOOSE cards. 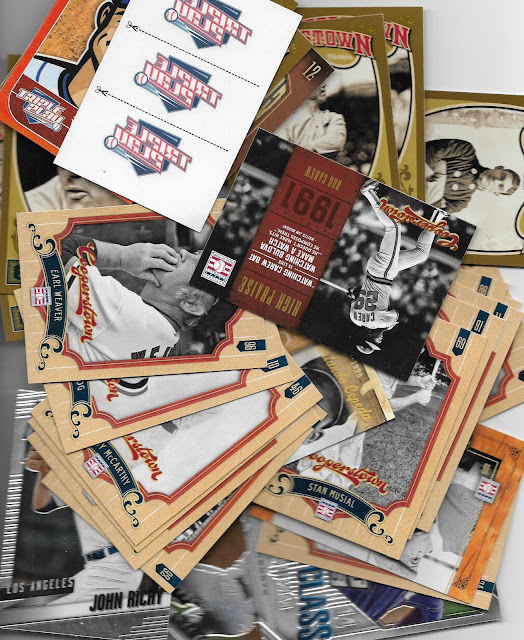 All right, you probably all know what happened here. I did, too ... pretty much as soon as I saw the white envelopes.

I had been scammed.

There was no autographed card in the box. Someone apparently had purchased this box already, removed the packs and autographed card, inserted the Panini rejects, resealed the box (upon further review I could spot some adhesive on the outside of both panels), returned the cards for a refund, and then a store employee returned the box to the card aisle where it was purchased by my sister-in-law.

I cannot conceive what kind of soul-less, brain-void imbecile one must be to go through all that trouble to get his $19.99 back, reseal a used package and screw someone out of their advertised cards. There needs to be a deserted island created just for people like this.

I was able to hide my disgust from my sister-in-law and it's much better that she doesn't know, but Fairfield needs to fix how they're packaging cards, especially if they're advertising autographs.

Since I am a collector who doesn't care much about autographs, enjoys base cards and history, these cards didn't horrify me. 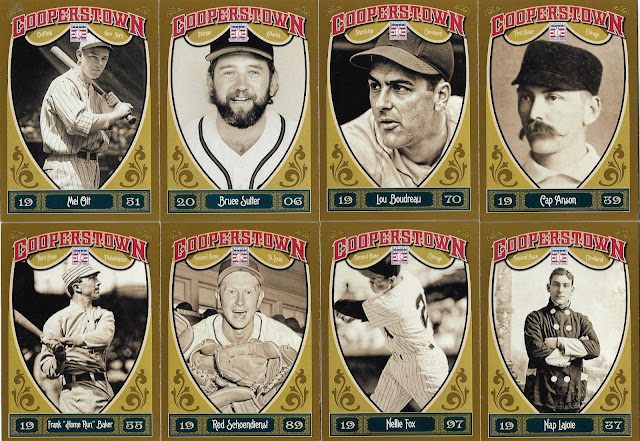 Although I didn't like the design of Panini's Cooperstown product (cutting off the tops of heads is not a solution to your lack of a license), I do like getting new cards of Home Run Baker and Red Schoendienst. 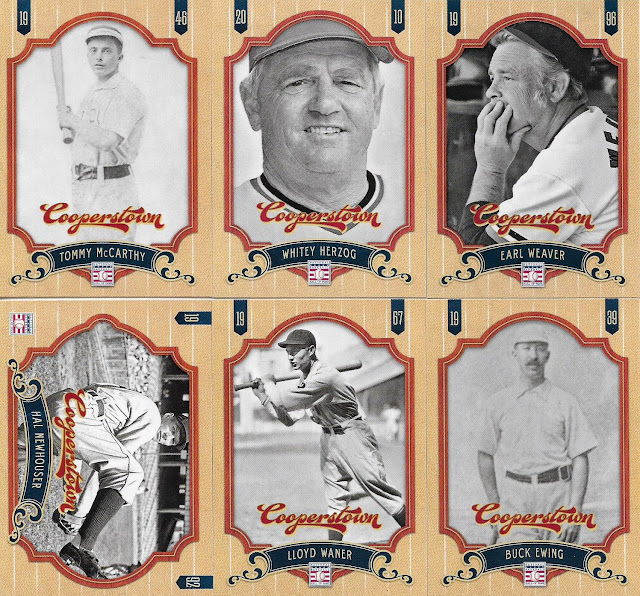 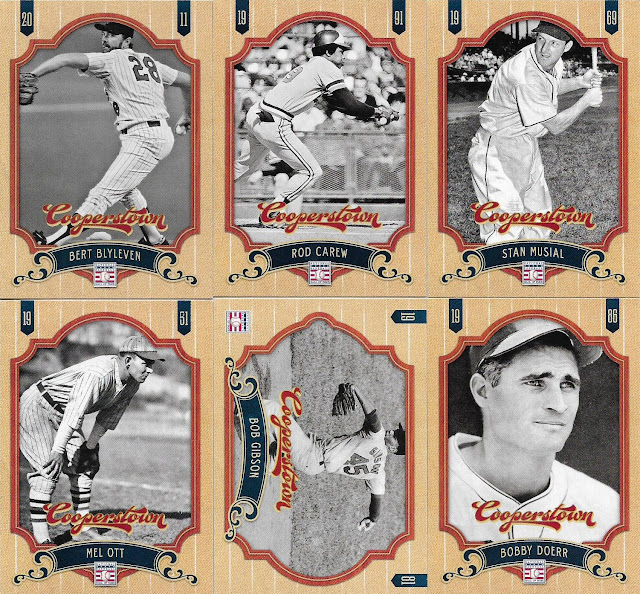 Sure, I'll take cards of Earl Weaver and Bob Gibson. 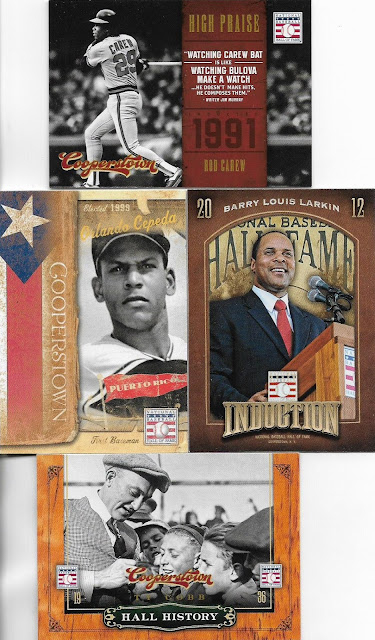 The inserts are the best part of the Cooperstown cards. I can't complain about these.

But I'll ignore the Triple Play and Prizm Draft Picks cards that also were discarded in there.

As for the packs that my sister-in-law bought, very little of interest came out of those. The end of 2017 is only two days away after all. 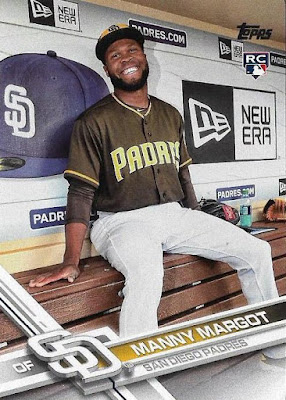 I did get a short-print out of the Update pack, and, best of all, I recognized it right away. 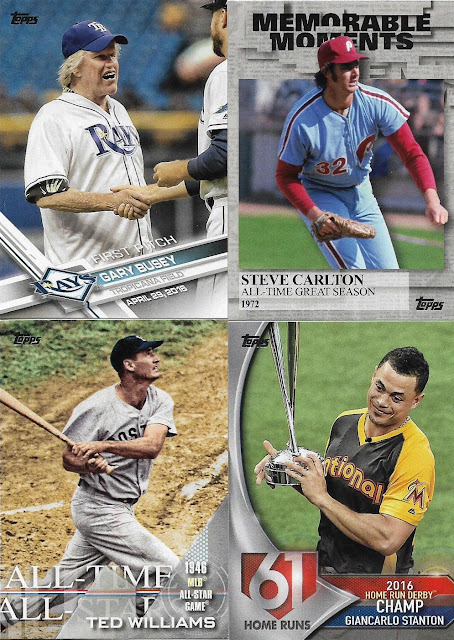 I hate it when I have to show inserts as the most exciting part because in a perfect world the base cards would be the stars of the show. But that's 2017 for ya. 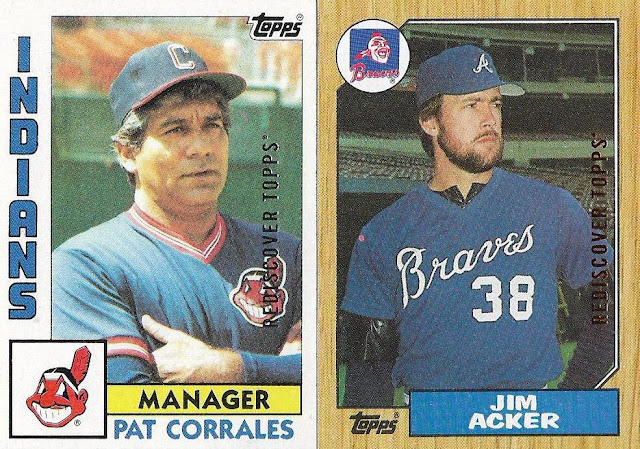 And these? Well when I pull any of these, I feel as scammed as buying someone's returned used product. Topps is trying to convince collectors that these are "new" cards when they're actually repackaged 10-cent items from the '80s with a stamp placed on them. That definitely sounds scammy.

This Fairfield box was my first experience with some other collector's card scam.

As scams go it's not as destructive as most of the ones you hear about in everyday life. But it will sour me on buying some Fairfield products and make me more wary than I already am about advertised autograph products.

Now that I think of it, what I should do is actually tell my sister-in-law what happened. If you knew her, you'd know she would track down the bastard that repackaged those cards in less than a week ... and glue his hand to his face.

Matt Prigge said…
I'd honestly prefer the Panini cards to the random auto, but it's a shitty experience. I'd bet all the packages at that store were filled with the same thing.
December 29, 2017 at 9:39 PM

Angus said…
Some stores make people fill out info as to what they've returned. Maybe the store will know who returned that product along with if they returned more than one.
December 29, 2017 at 11:28 PM

Nick said…
I bought a pack of some year of Flagship at Target once (it was a while ago, I'm thinking either 2008 or '09 Topps) and found cards from sets like 2002 Bowman and 2002 Fleer inside. To this day, I don't know how that happened or why someone would reseal a loose pack with random older cards. Some Target shoppers are just plain shady.
December 30, 2017 at 12:23 AM

Jeremya1um said…
Scammers like that need to be tortured. And say what you want about Update, but it has had some great Rays and Tigers nd PC Cards for me in it this year.
December 30, 2017 at 4:58 AM

Mark Hoyle said…
Don't know much about the repacks but that is a real drag. My card related gifts comprise of eBay gift cards.
December 30, 2017 at 2:00 PM

Fuji said…
It blows my mind to think that someone would sit down, carefully open up one of these Fairfield repacks, take out their 1994 Signature Rookies autograph of a guy who played 3 games in the majors, reseal the package, and wait in line to return them at Target. With this kind of effort, go out and get an f'n job! The fact that these people do it with the full understanding that someone else down the line gets screwed infuriates me even more. I only hope it's some 8 year old kid who is still egocentric, but will eventually learn that the world doesn't revolve around him/her and will regret the decisions he/she has made. However... down inside I know that it's one of those grown adults who sit in the card aisle and feels up every pack in hopes of pulling a dollar bin relic card, while leaving other customers with manhandled packs to purchase.
December 30, 2017 at 2:43 PM

Nick Vossbrink said…
Hehe those Panini cards are what I bought my 8-year-old for Christmas. He just got into collecting and so getting the all-time greats is super exciting or him. That the backs of those have a short bio rather than just stats is also pretty cool. He's already paged and is starting to read them now.

Jafronius said…
My kid got one of those boxes with money he got for Christmas. He had opened it and tore through the packs before I could see it, but he told me the autograph was of someone he didn't know. I found the cards later that day...the packs were a 2016 Topps Opening Day, a 2017 Topps Heritage, and a couple of 2016 Topps Updates. The autograph was one of those Royal Rookies and I didn't hear of him either. He did get a Kris Bryant base card in the Heritage so he was happy about that. It's too bad Fairfield couldn't be bothered to at least put a known player (whatever their level of success) in their products.
January 4, 2018 at 12:36 PM