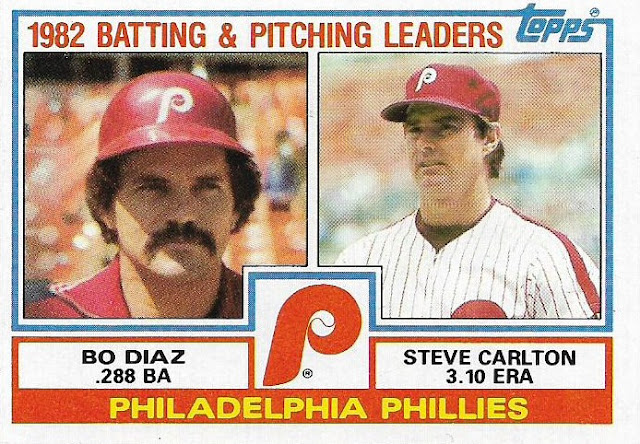 It's December. For many baseball fans that means winter meetings and trades. The folks on Twitter will work themselves into a froth about what deals may or may not happen, what they mean in their infinite wisdom, and how the moves will CHANGE THE FACE OF THE 2018 SEASON FOREVER.

But it rarely happens that way. There haven't been a lot of times when a team made a December deal in the offseason and then used that deal to win the World Series the following year. Meanwhile, trades during this month have been decreasing over the years.

The times a December deal paid off almost instantly often have been legendary.

In 1965, the Orioles acquired two players in deals one day apart in December. They then packaged those two players with pitcher Milt Pappas three days later on Dec. 9 to acquire Frank Robinson from the Reds. The Orioles swept the Dodgers in the World Series the following year.

To a lesser degree, in 1966, the Cardinals obtained Roger Maris from the Yankees on Dec. 8th in a trade for infielder Charley Smith. Maris was on the decline, but hit .385 for the Cardinals against the Red Sox in the 1967 World Series, which St. Louis won.

In 1970, the Orioles acquired Pat Dobson from the Padres on Dec. 1 and Grant Jackson from the Phillies on Dec. 16. They didn't win the World Series the following year, but they took the Pirates to seven games and those two pitchers were key.

This month is the 35th anniversary of the Phillies building their "Wheeze Kids" team that reached the World Series in 1983.

The rest is history. The Wheeze Kids were born.

In honor of that team (a team I don't like for obvious reasons, by the way), I thought I'd feature it through its 1983 Topps cards: 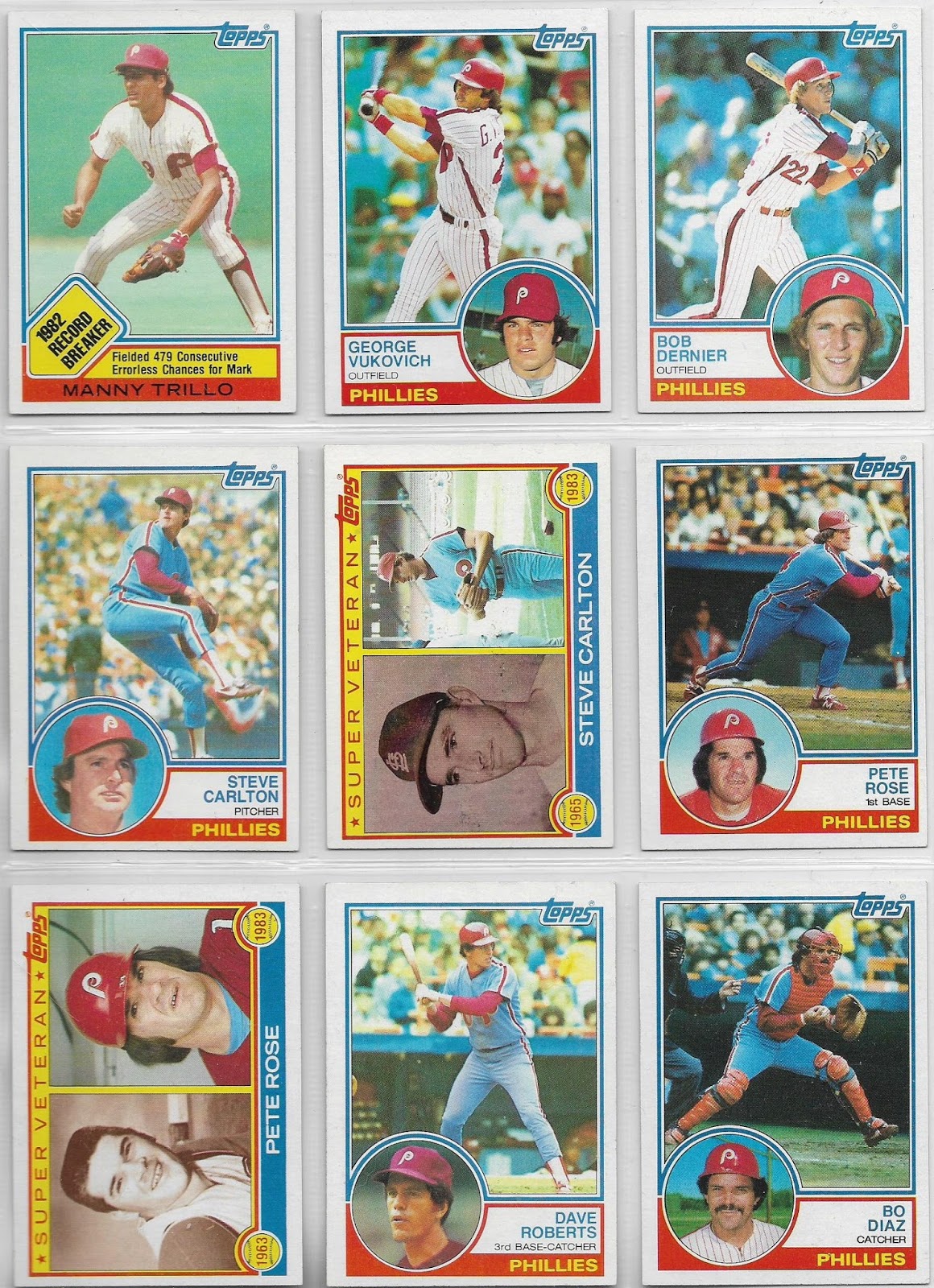 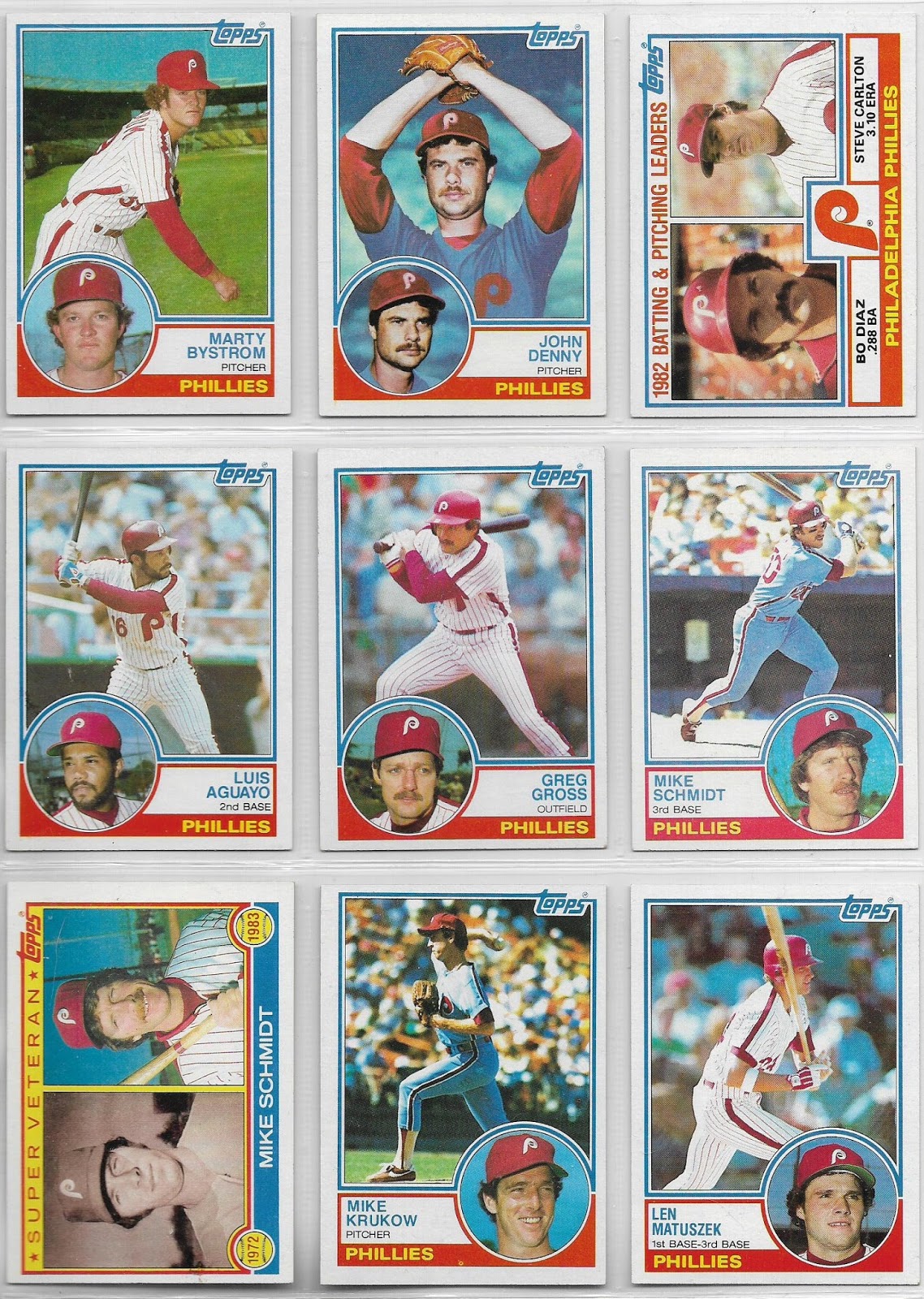 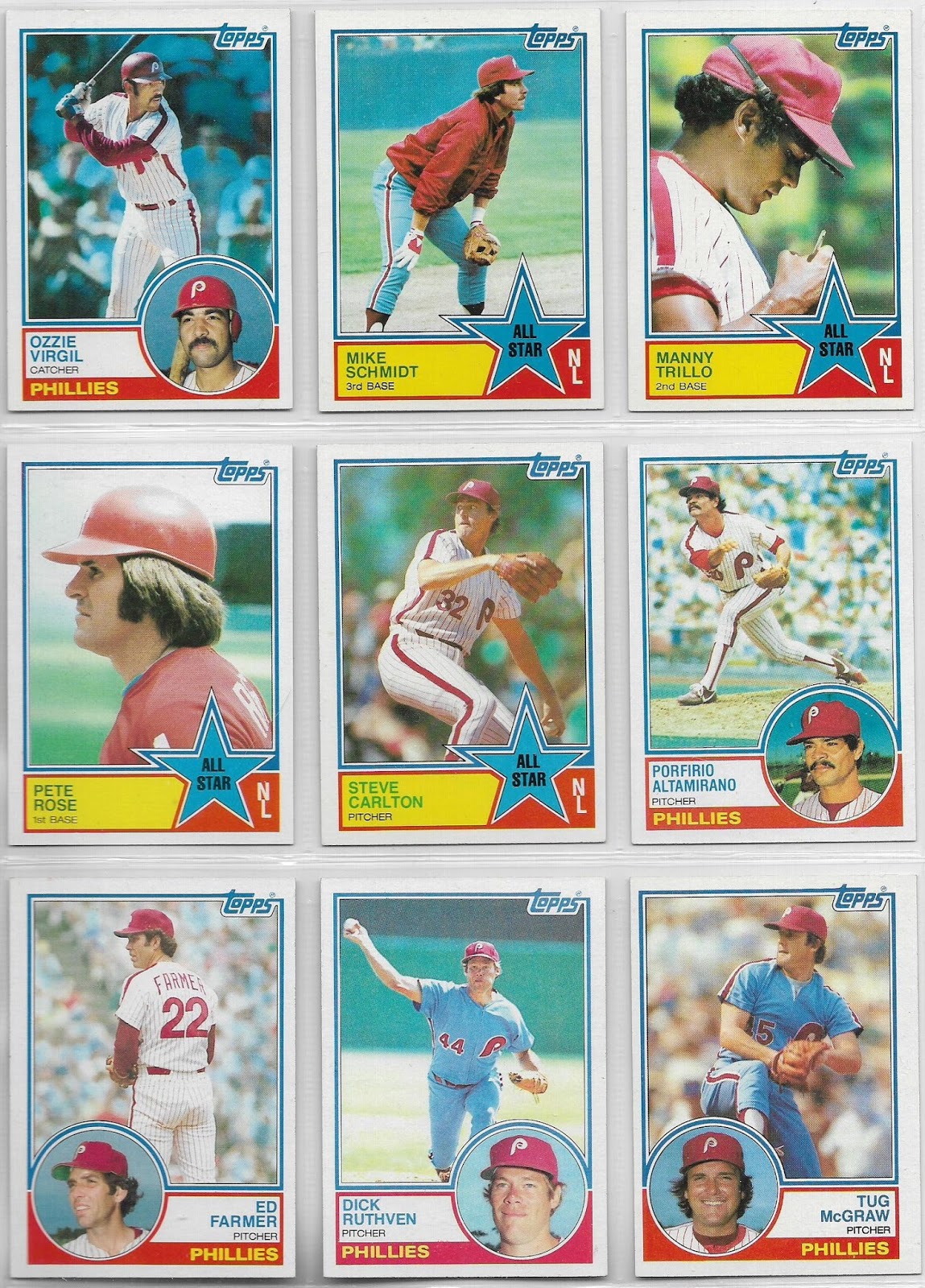 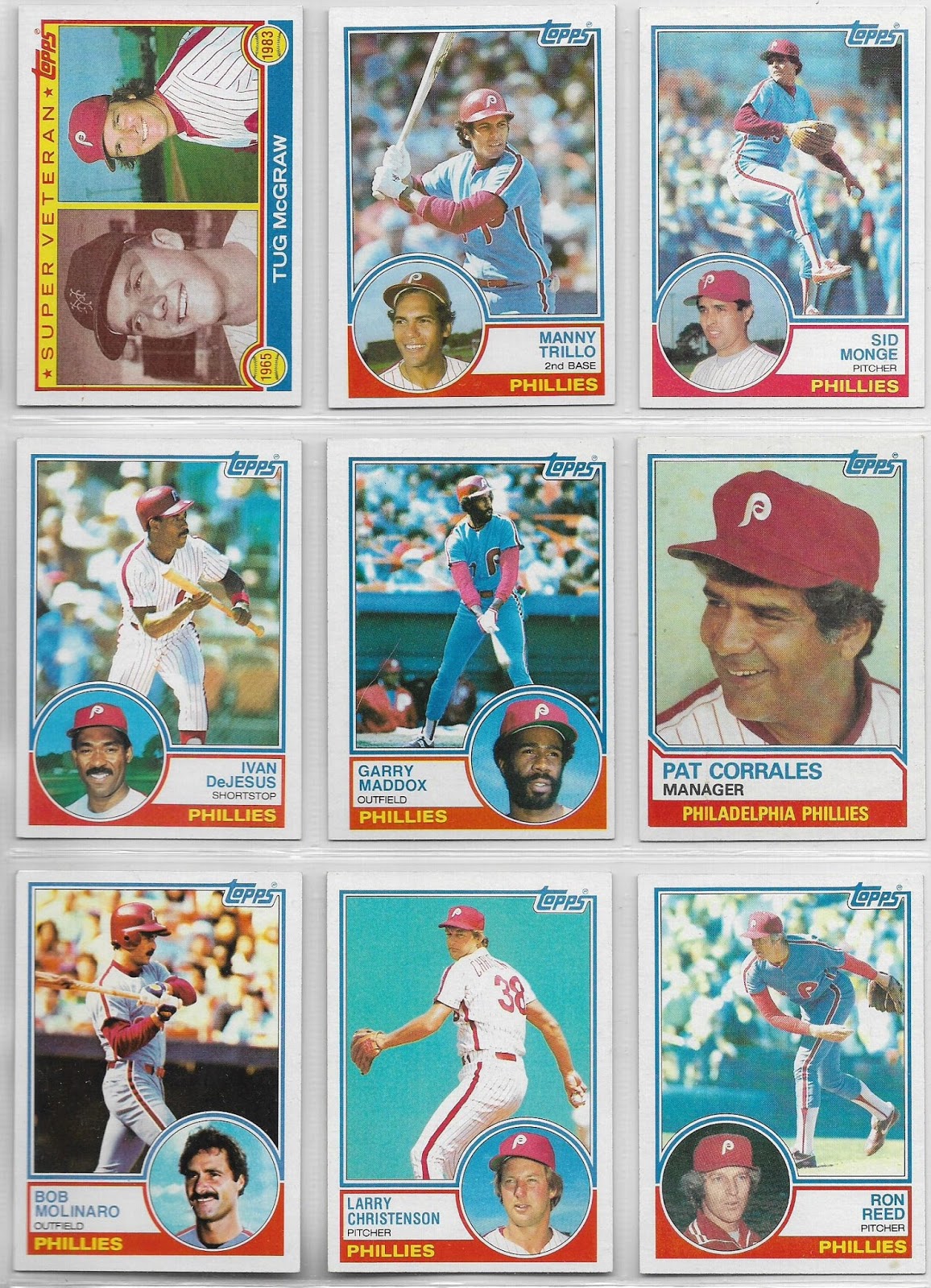 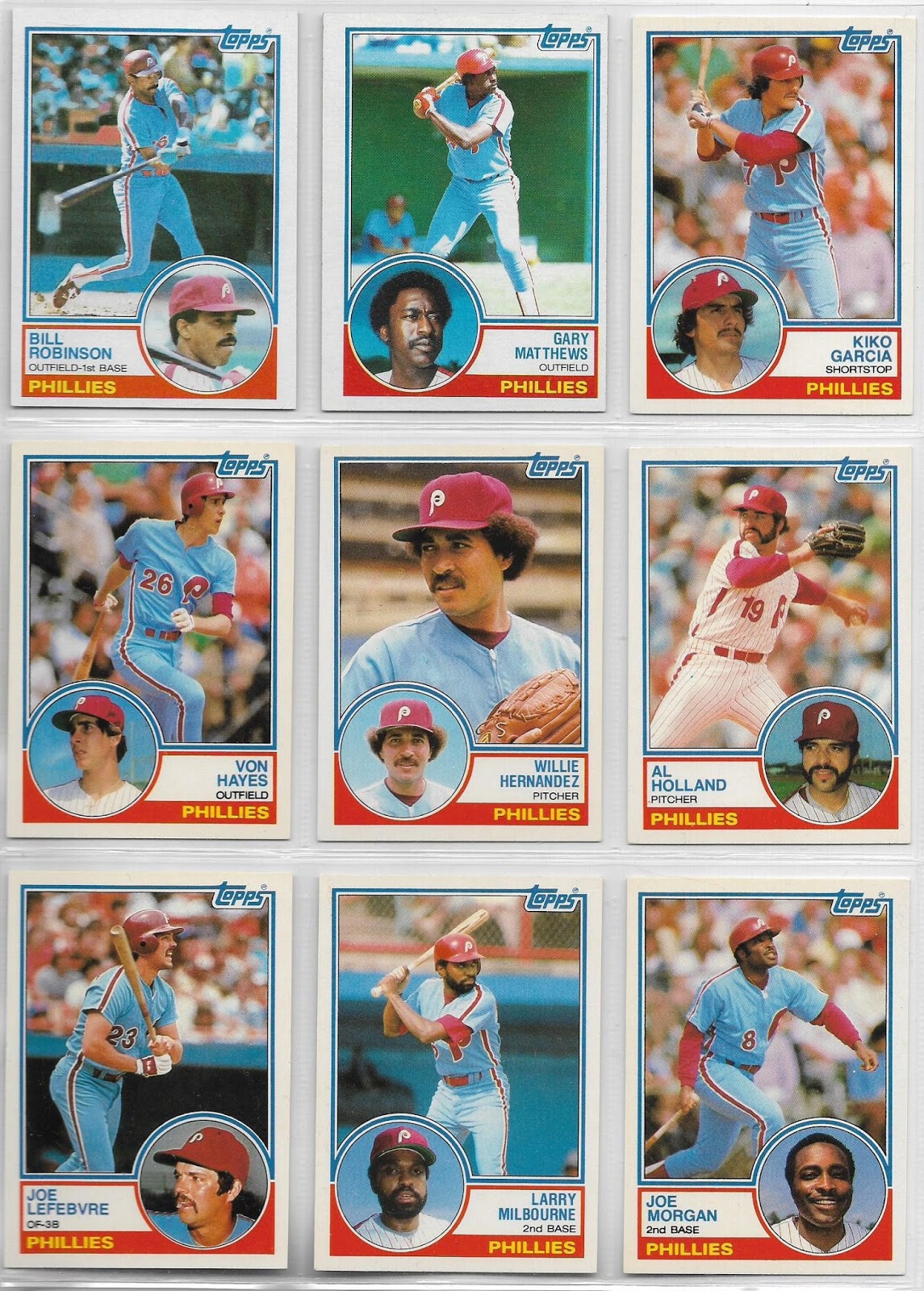 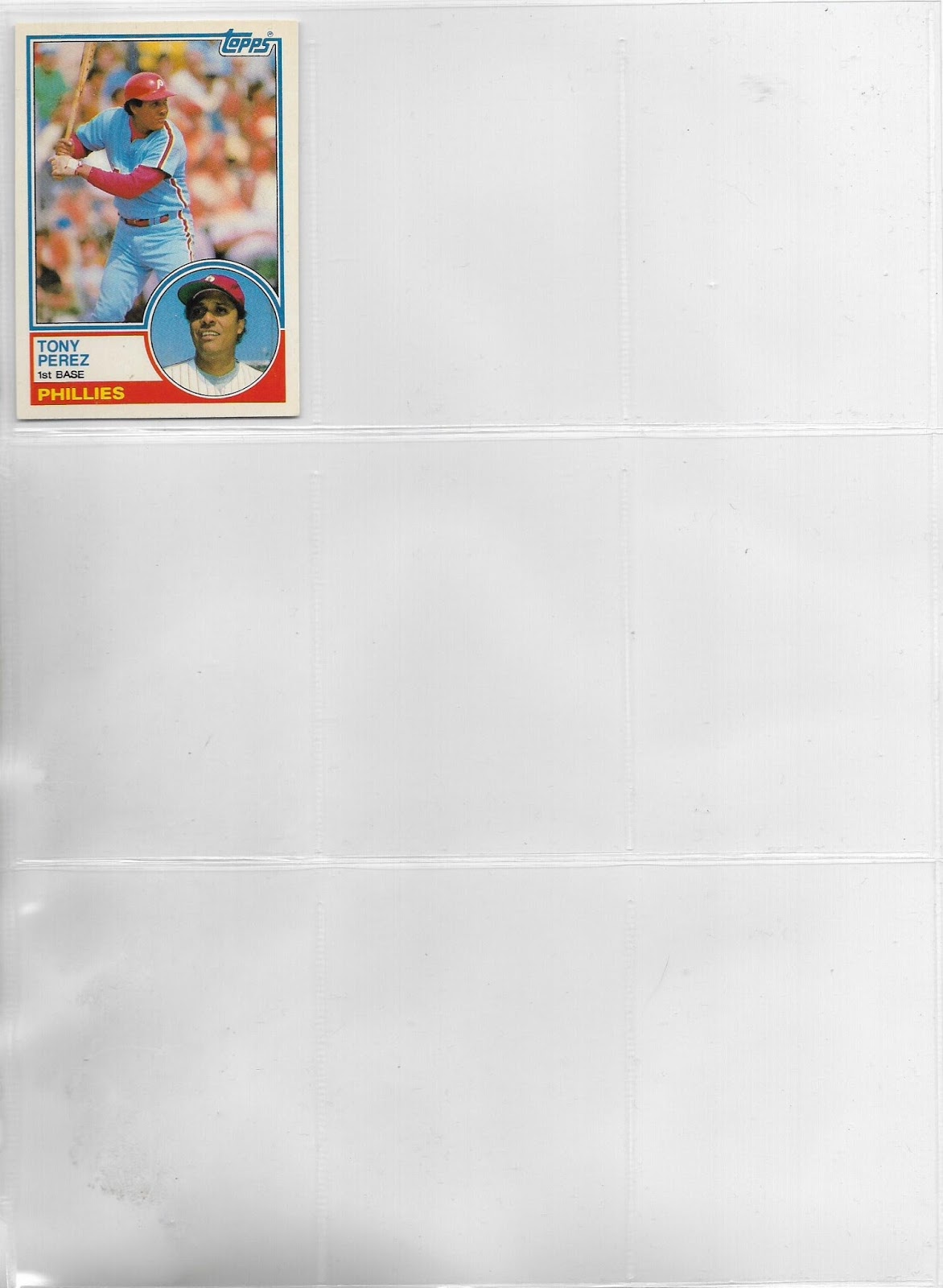 Nobody wants to sit next to Tony.

You may have noticed that this is some gigantic team set. It is 46 cards! Holy bananas!

That monster total is a combination of including the Traded set, the Super Veterans subset (and the Phillies having a bunch of super veterans), the all-star subset (same), three Manny Trillo cards (Manny Trillo!) and lots and lots of offseason moves by Philadelphia.

All right, let's break it down with the Joy of a Team Set tally: 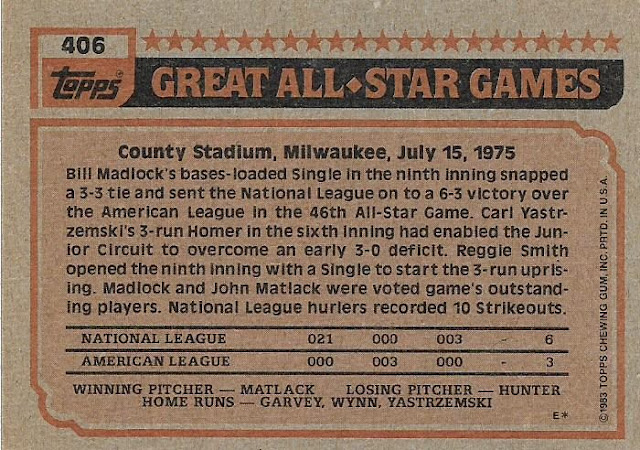 Team's claim to fame: The Phillies fired their manager (Pat Corrales) in July despite being in first place, and replacement Paul Owens (who doesn't have a card in 1983) took a veteran-laden team of "geezers" to the World Series.

Players I've talked to: none. 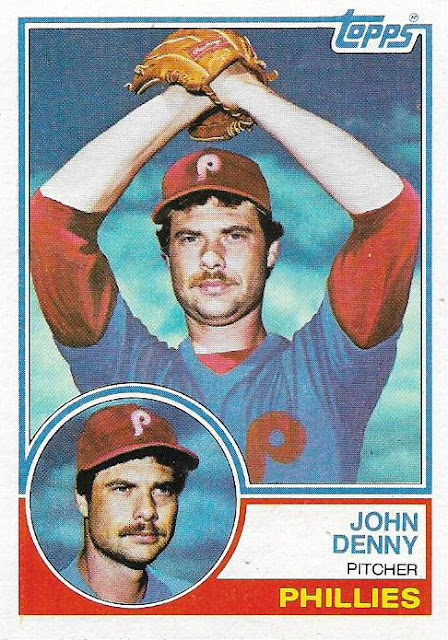 There's an argument that can be made for others but the obviously airbrushed uniform and hat of former Indian John Denny is oddly striking against the sky background. 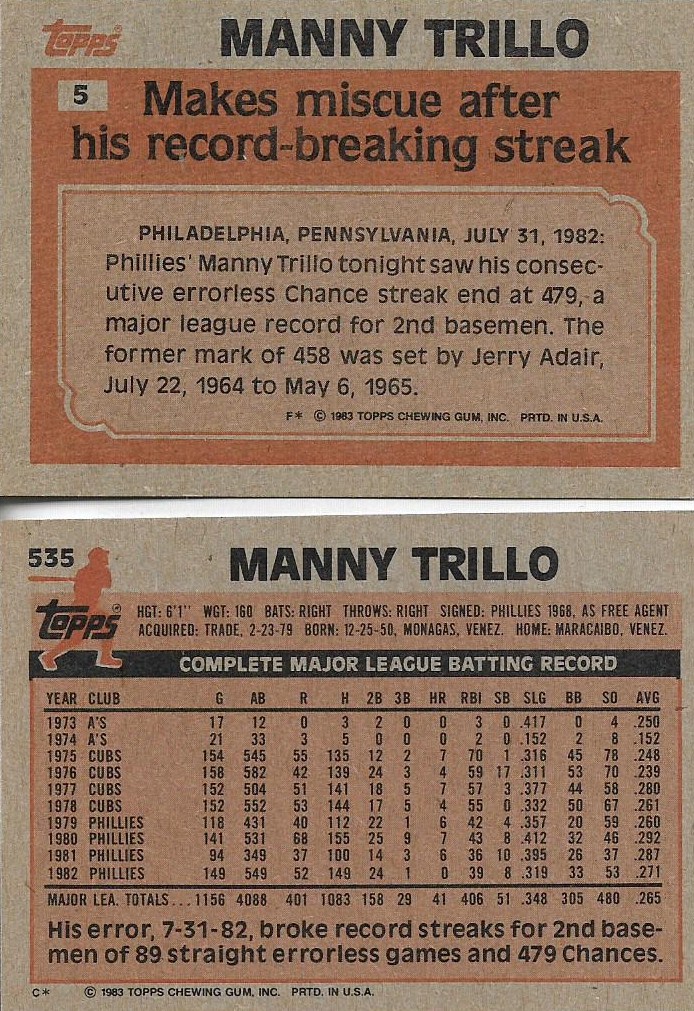 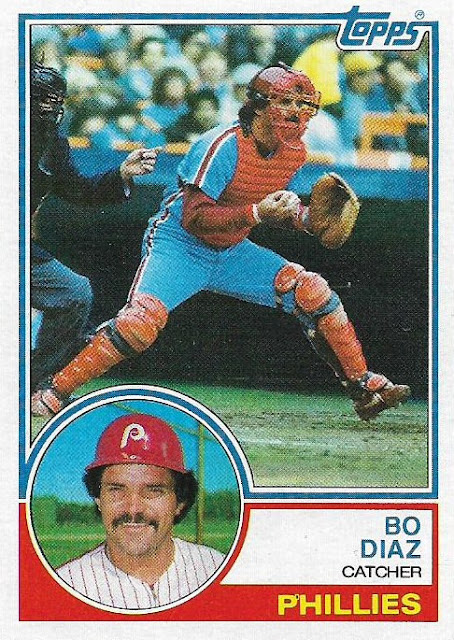 Thanks again for joining me in Joy of a Team Set. Have fun following the December meetings. But don't expect much.

Jason T. Carter said…
Bo Diaz was a pretty no-nonsense guy. I enjoyed watching him with the Reds.

DMA said…
I remember seeing in the news when Bo Diaz died, crushed by a satellite dish.

This team was the last gasp of the Phillies postseason efforts for a while, with their many appearances from 1976-1983. It was a bunch of years of "rebuilding" after that.
December 4, 2017 at 8:12 PM

steelehere said…
The Dodgers 1988 Worls Series Championship might not have happened if not for the December 1987 three team trade with the Mets and A’s that netted the Dodgers Jay Howell, Jesse Orosco and Alfredo Griffin.
December 4, 2017 at 9:15 PM

Jeremya1um said…
Ive actually finished the 1983 Topps and 1983 Topps Traded sets on my blog by making cards for and missing players and there are an additional 27 cards on top of the whopping 46 cards already there making it 73 cards in the 1983 Topps Phillies master set.
December 5, 2017 at 6:57 AM

acrackedbat said…
The Diaz is beautiful. This darn design is really growing on me. I must stop the 80s from coming. I must.
December 5, 2017 at 9:00 PM