Cards and tunes, is there anything else? 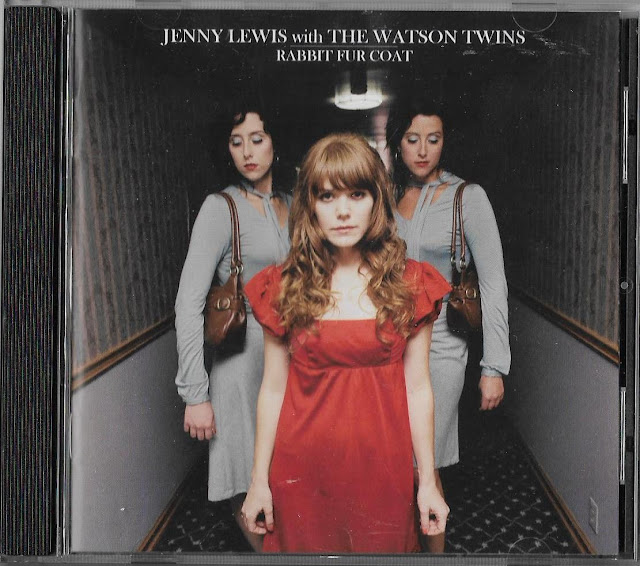 The answer to that is "no."

Give me cards and tunes. I can make a life out of that.

Recently, Gavin of Baseball Card Breakdown was looking to downsize his CD collection. That is understandable in this digital age. But I can't say no to new-to-me CDs. I come from an age when looking for the new releases each week at the record store made me as giddy as any time I've ever walked into a card show. Bringing a new record home was epic. I'd carve out a period of time -- usually when the folks weren't home -- to listen to it for the first time.

Then I graduated to college and CDs. Spurred on by the college radio station, WBNY at Buffalo State and especially CFNY out of Toronto, I expanded on my taste for alternative music started in the early '80s by then-edgy musicians like U2, REM, New Order and Tears For Fears by searching out college friendly bands at the Record Theater across from the University of Buffalo campus.

CDs -- those glorious jewel boxes -- were precious. I own many CDs now and have rid myself of only a small number. I can't part with them (and do play them still sometimes), but I also have an attic for storage.

Anyway, Gavin sent me a whole bunch of alternative-ish CDs, many more than I expected, from mainstream to indie. Along with that came a bunch of cards, from Dodgers that I need to straight packing material (Bowman Tampa Bay Rays, really?).

Let's see a few of those: 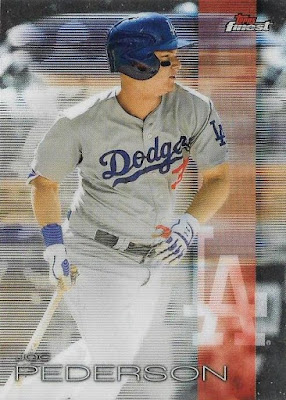 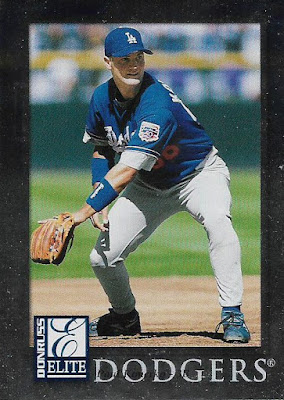 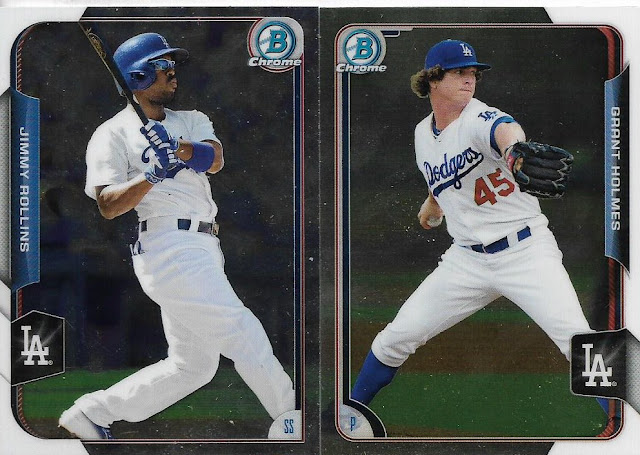 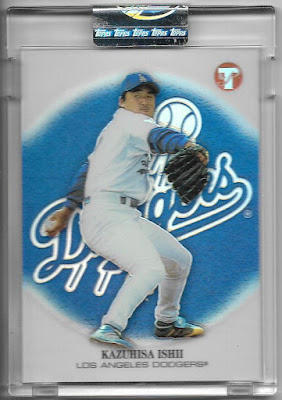 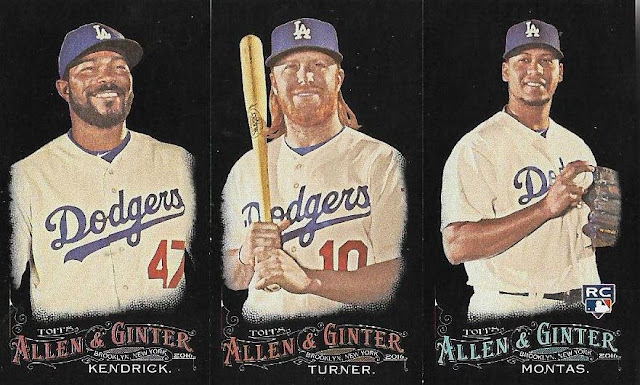 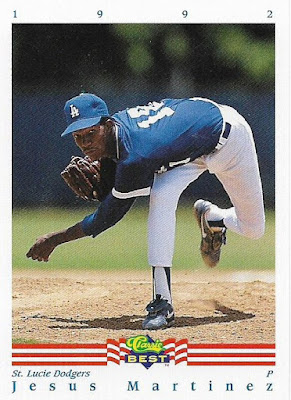 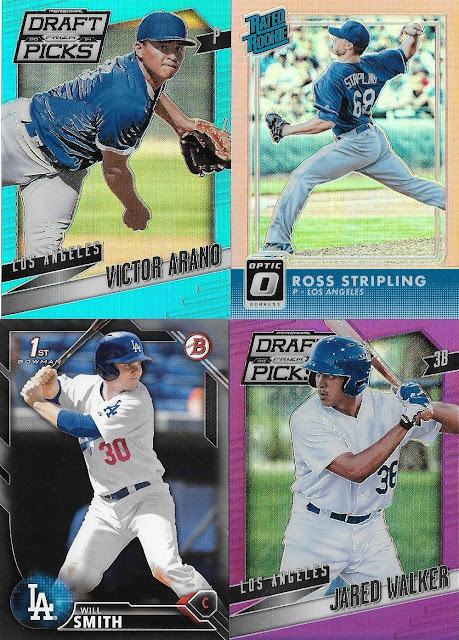 Gavin, obviously, likes chasing prospects. I like pretty colors. So even if I don't know who the heck the players are, I appreciate the border parallels.

The encased Kaz Ishii I requested a little while ago. The Dodger Konerko came with a few other Konerkos, but that was the only one I needed. The Jesus Martinez is a long-needed Dodger prospect from 1992 Classic. Heck I even have the Piazza from that set already. 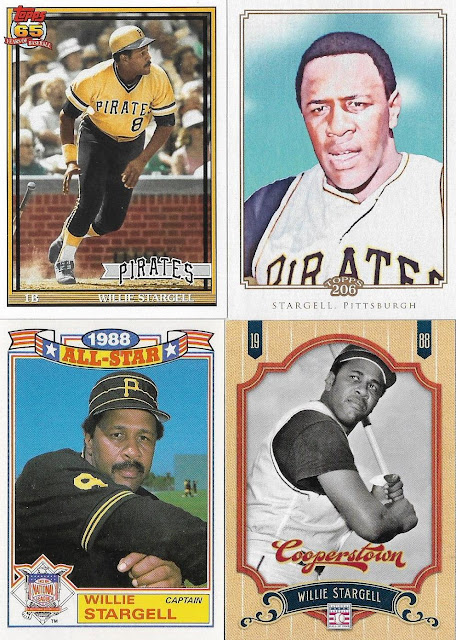 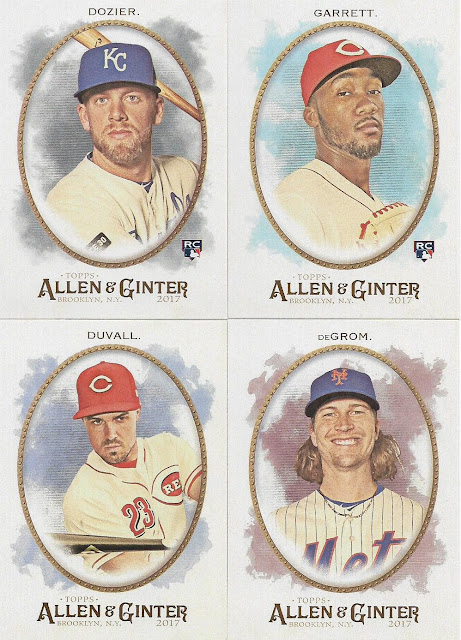 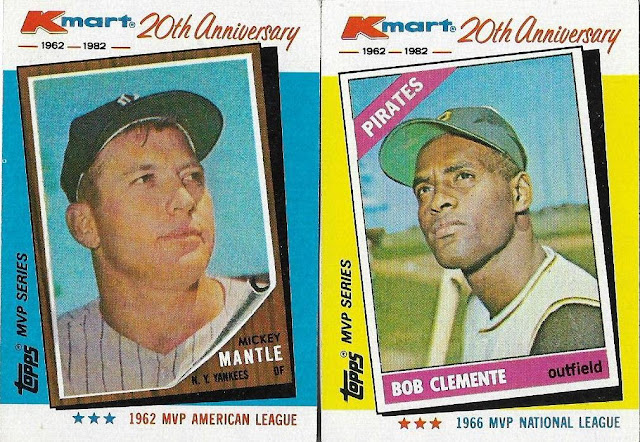 Of the non-Dodgers that Gavin sent, these are the ones I can most use. I should really have all of the 1982 Kmart cards by now, but I am guilty of owning like only 7.

Somehow, all four 2017 A&G cards shown here are needs even though I own more than half of the set. 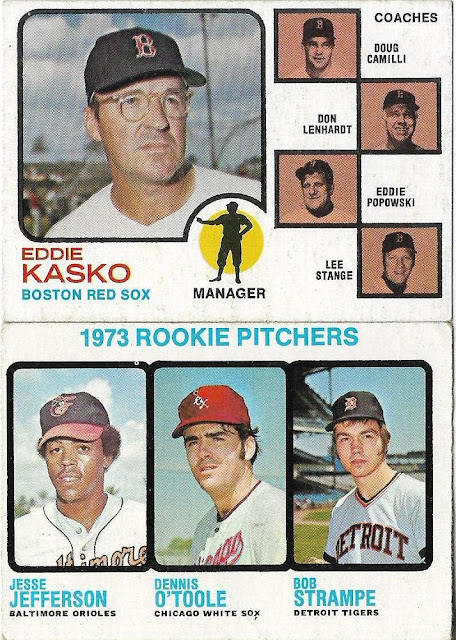 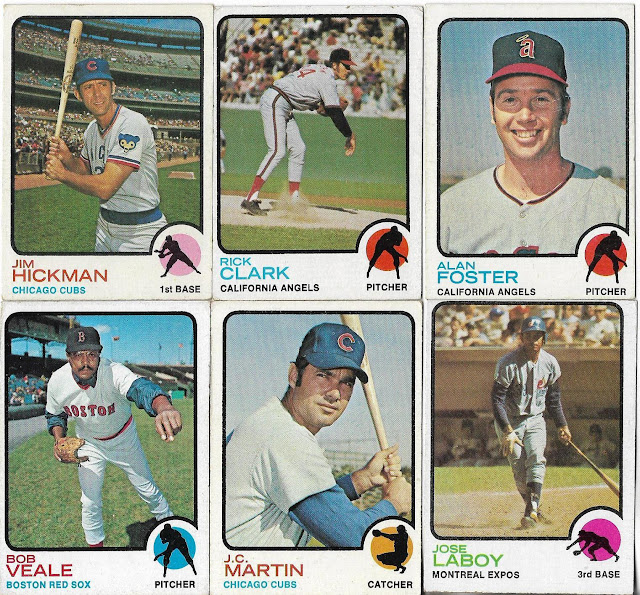 I also received a bunch of 1973 Topps for my set completion task from Gavin's extras. The ones shown fit nicely into my set. The others were a bit rough for joining my collection, but I sure do enjoy crossing off '73s, especially that Bob Veale piece of perfection. 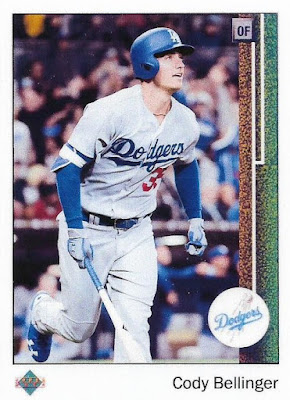 It's not a Gavin card package without a couple of customs and here are two inspired by the two-player rookie explosion this past season. The images look a bit faded because I kept them in penny sleeves while scanning. Gotta  protect the InVestMent.

As usual, it will take me awhile to sort all these cards, but at least I have some new tunes to accompany on my task. Of the CDs I received, I'm probably looking forward to listening to the Jenny Lewis one that I featured at the top of the post. I've always liked Rilo Kiley, one of the most "real" groups I've ever heard.

Here are a few other CDs that I'll probably pop into the earbuds first: 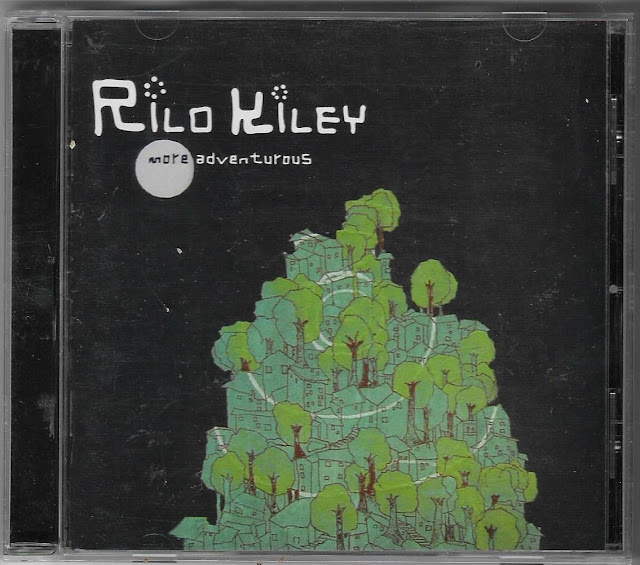 Probably the group's best album, and one I've never listened to from top to bottom. 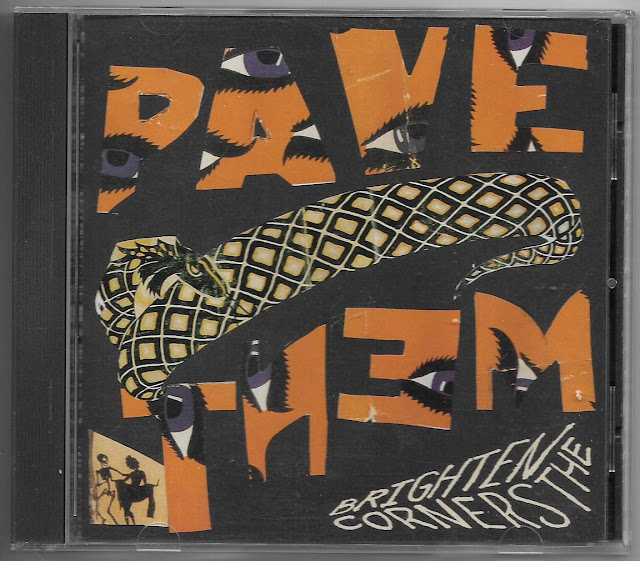 Back in the early '90s, I was turned on to Pavement by the same co-worker who introduced me to The Tragically Hip. I couldn't really get into Pavement then so I'm looking forward to seeing where I'm at after 25 years. 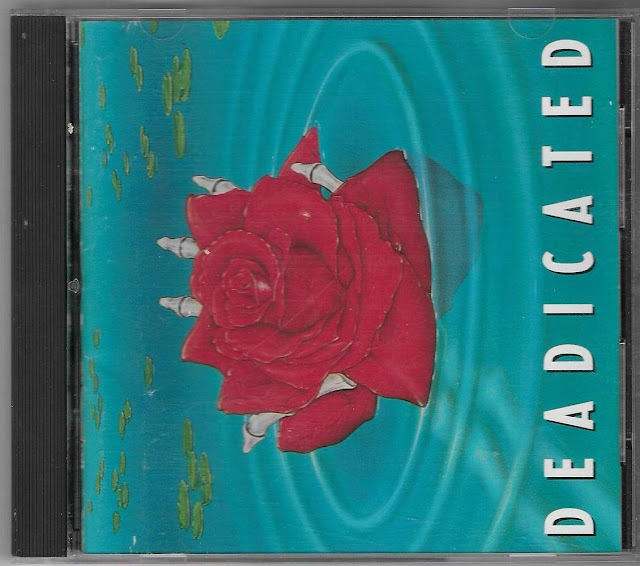 Again, back in the '90s, it was the rage to get a bunch of bands to play songs by a legendary artist or group and package them into an album. I'm not a Grateful Dead fan, but I love historical tributes like this. Looking forward to it. 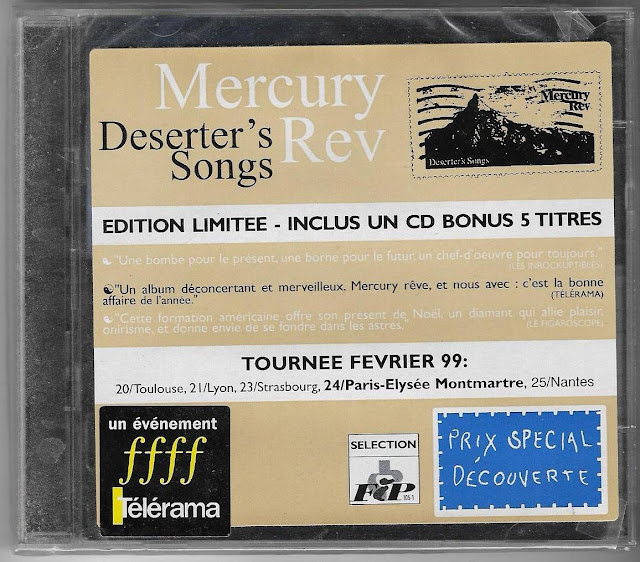 I know of Mercury Rev, know their songs vaguely, mostly because they're Buffalo-based. This is the album that saved the band from breaking up and this particular limited version looks most impressive. I can't remember the particulars about it, I may have to go back to Gavin's CD post. 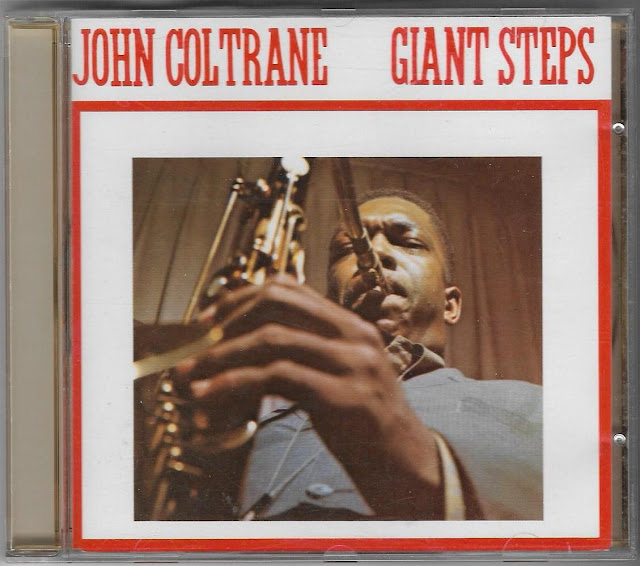 When I was in college, I took a music class -- I don't remember the topic -- but we listened to Coltrane for seemingly half the semester. It was so deconstructed that I had a difficult time enjoying it. Jazz wasn't my thing at the time, but I bought a few jazz CDs soon afterward and got into a bit. Gavin sent a few different Coltrane CDs, but this is the big one. 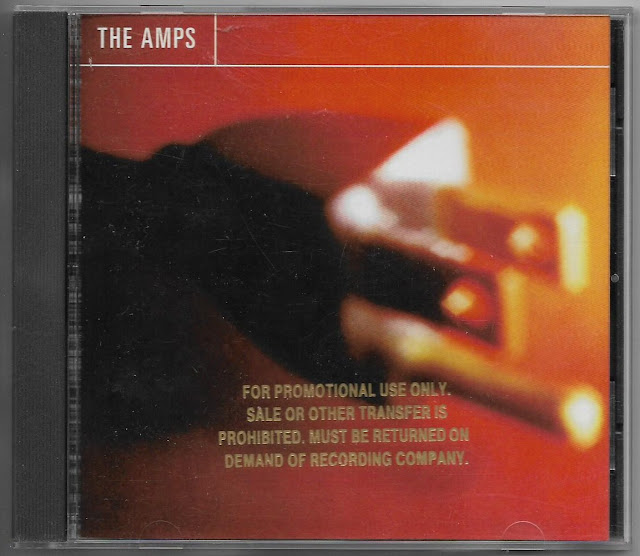 This is the only CD from the lot that I've listened to already. I liked it quite a bit. I got into the Pixies and Kim Deal's band, The Breeders. I played "Last Splash" relentlessly in 1993. This is the band Deal formed when The Breeders took a break.

The '90s was alternative's heyday with MTV's "120 Minutes" and the post-grunge explosion that thrust alternative bands into the mainstream (you weren't anything if you weren't 'alternative' in 1996).

I started to get away from this kind of music by the turn of the century. But it's naturally in my blood and I can't wait to find some songs to pop into my digital library, as well as play the entire CD top to bottom, of course.

The way we used to listen to music.

There was nothing else.

simpson said…
totally agree on the sorting cards to full albums bit, I do it all the time to this day. and I gotta tell ya, that jenny lewis & the watson twins album is just fantastic!
December 8, 2017 at 8:34 PM

Chris said…
Great stuff! Gavin is very generous - I just got a box from him, and it amazes me how much great stuff he can pack into one package. That Ishii is awesome, 2002 Pristine is one of my favorite sets of all-time.
December 8, 2017 at 9:31 PM

defgav said…
Sorry, Greg, I just heard from the Amps' record label and they demanded their promo CD from 1995 back from you. They had harsh words for me transferring it to you without their written consent.

Nah, I'm just kidding. Glad you like much of the stuff! Sorry for dumping Rays/etc on you, but hey, my well had run dry on Dodgers and I had to fill up the box somehow. Plus, part of the deal was you had to take a few unwanted cards off my hands. A give and take. Anyways, hope you enjoy the CDs!
December 8, 2017 at 11:11 PM

Jeremya1um said…
Bowman needs more Rays and I’ll be happy to take any unwanted Rays cards off of your hands.
December 9, 2017 at 4:57 AM

Jamie Meyers said…
I'm not a huge Dead fan either, tried to get into them once or twice to impress the occasional Deadhead woman, but they did write good songs. I gained a better appreciation of that from the Deadicated CD that you showed, which I bought mostly because it had Warren Zevon on it.
December 9, 2017 at 7:21 AM

Mark Hoyle said…
Very cool package from Gavin. Cards,Sports in general and music are all I need for enjoyment and relaxation. Not much of a TV or movie guy.
December 9, 2017 at 7:56 AM

Fuji said…
You and I must have had the same music professor in college, because we listened to a lot of Coltrane in my class too.
December 10, 2017 at 8:44 PM