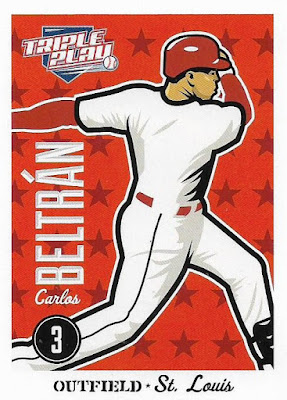 It's all in the way you look at it.

Like just about everything in life, a repack box can be praised or ridiculed. You can seek out the negative. It's very easy to do, particularly when Fairfield hides the less desirable packs so they are not viewable from the outside.

So you could focus on the repack's weak points. 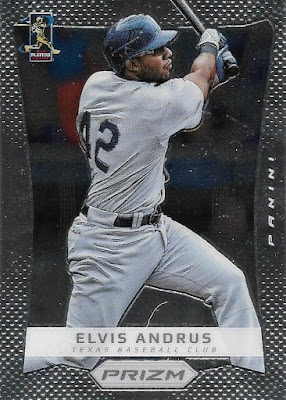 It's bound to include a pack or two of some version of the lifeless, metalic-looking Prizm. Grown men in wordless laundry on a set that is from either 2012 or 2013. Who knows? 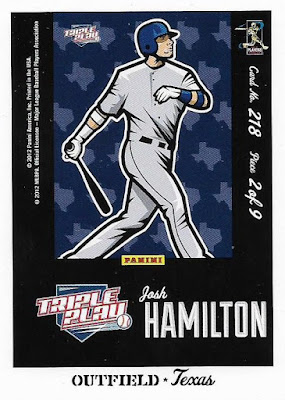 And, yeah, you could emphasize that every repack seems to contain multiple packs of Panini Triple Play, including those useless puzzle pieces. You'll scare plenty of collectors away with that rant.

Also, there are lots of packs of cards from sets that either I don't need or don't want, like 2015 and 2016 Topps flagship. The box is filled with collecting incidentals.

But I find that after I'm all done opening the repack packs and sorting through what I need, basically reviewing the repack box again, that the box in the long run makes me happy. There's good stuff in there every time.

So here are 10 things from that repack, in no particular order, that made me happy: 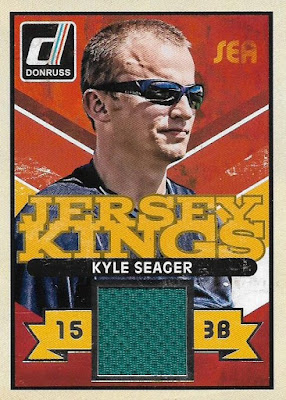 1. I'll start with the guaranteed relic first. I didn't expect much from the guarantee and I didn't get much. It's the wrong Seager and he ain't wearing a hat. But the relic bit is a pretty aqua. There are none of those in my collection. 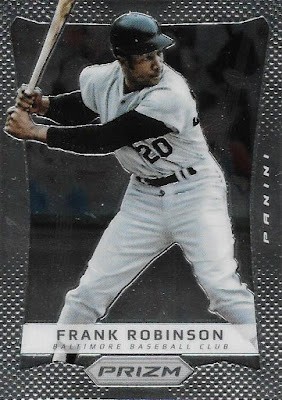 2. A little weird but I will not argue with another card of Frank Robinson from the Baltimore Baseball Club. At least it's not that Eddie Murray Prizm awfulness sitting in one of my binders. 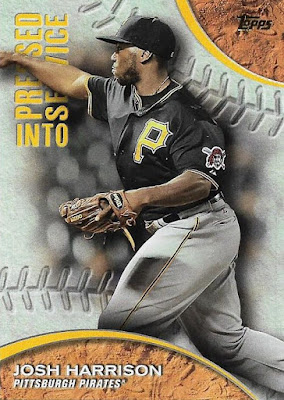 3. Inserts that don't suck. The Pressed Into Service insert set from last year is one of them. I don't know if Josh Harrison is really pitching here. 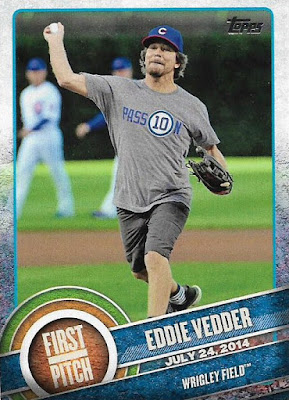 4. Part Two of inserts that don't suck. I am surrounded by Pearl Jam fans, both in person and online (all younger than me, I might add). I tried to get into Pearl Jam back in the '90s. I bought "Vs." on CD and told myself I liked some of the songs. But actually it's not really my thing and I never purchased a Pearl Jam album or song again. Nice of Eddie Vedder to pay tribute to Ron Cey though. 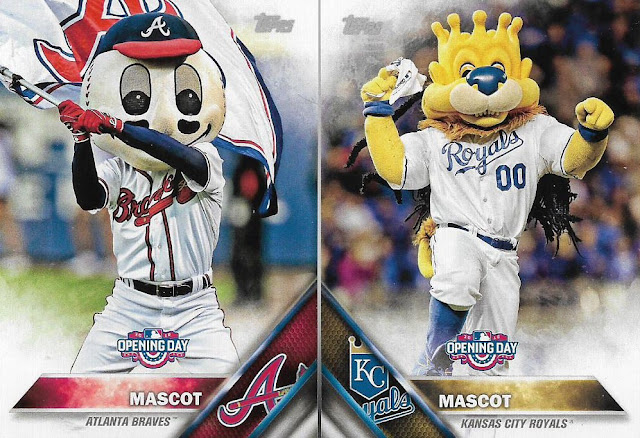 5. Mascots! The Royals mascot weirds me out. Is the crown supposed to be hair? His brain? 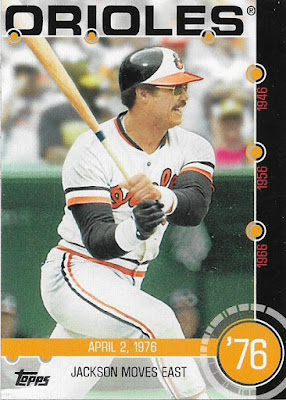 6. Reggie Jackson as an Oriole. Finding Reggie in Baltimore black-and-orange on cardboard was a rarity for decades. It's becoming a bit more common now. But it's still a treat. 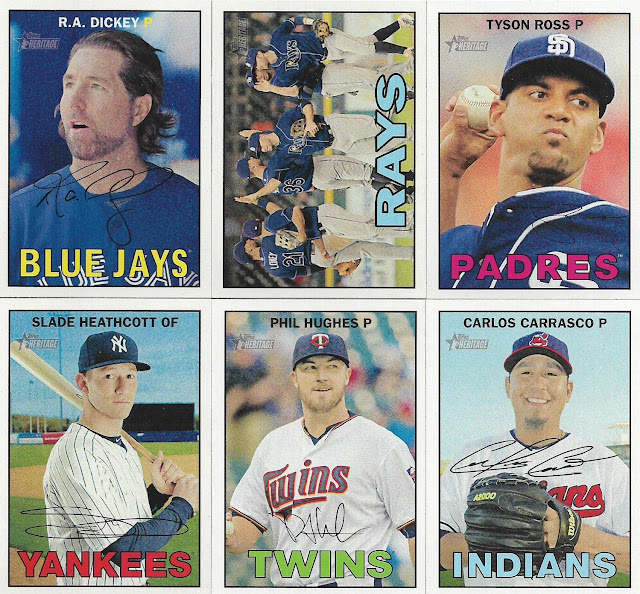 7. Six cards from 2016 Heritage that I didn't have, including a short-print. This set is very close to, "heck, maybe I will collect it." Still not going to do it. But I like seeing the tribute to '67. 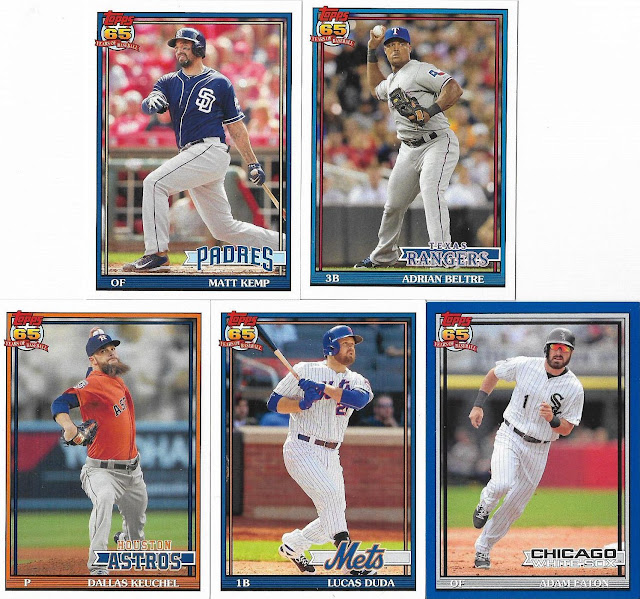 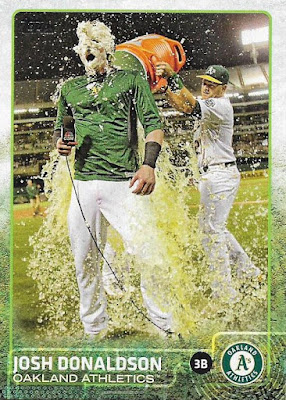 9. An image variation short-print from 2015 Topps, a set I actually like. Yeah, that makes a difference. 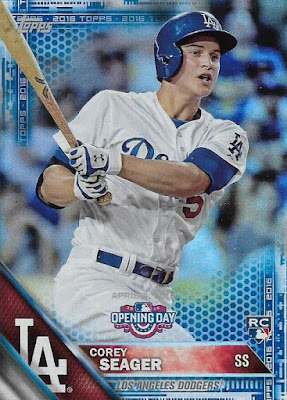 10. One card that makes the consumer-critic in my head shut up. There's the right Seager! All dressed up in blue!


Repacks are happiness. Don't let anyone tell you different. This is not a commercial for Fairfield. It's just the way I feel.

Nick said…
I opened one of these over the weekend, and it was a dud even by repack standards. I would've been hard pressed to come up with three things that made me happy out of mine -- no needed parallels, no interesting inserts, and certainly no Gatorade-induced SPs (which I could give a good home to if you ever decide to unload it, by the way). But I'm still glad repacks exist, though I'm usually more inclined to go with the 100/$5 ones at Walgreens rather than these.
September 4, 2017 at 1:25 AM

Jongudmund said…
Is it just me or does the Braves mascot look like a discount Mister Met? (Also, do they not have names?)
September 4, 2017 at 3:13 AM

Fuji said…
I'm not a fan of them... but sometimes I need a cheap bust, so I'll grab one. Looks like you hit the repack jackpot with that Seager and Donaldson. Congratulations!
September 4, 2017 at 11:56 AM

Josh D. said…
I love repacks, but it's true that they often are duds where the money could have been better spent elsewhere. Glad you could get something interesting. If you would be willing to set it aside for us, me and my crew would love the "Royals Mascot" card (aka, Sluggerrr). I THINK the crown is supposed to be his hair...definitely not his brain!
September 4, 2017 at 12:47 PM

Johnnys Trading Spot said…
I'm 50/50 on repacks. One of the local (Ocala) Walmart's has been very good to me with them. K-Mart when they had them was too, but not a whole lot of luck at Target with them. But they do make a good cheap scratch when there's an itch going on and nothing better to bust.
September 4, 2017 at 1:51 PM

GCA said…
That is just ridiculous. So they have an exclusive multimillion dollar contract to represent the organization, players, uniforms, logos and symbols, all except for the guy in the rubber lion suit?
September 6, 2017 at 9:12 AM