The wrapper was the best part

I did indeed get my butt back to the card aisle. I went out this afternoon for the sole purpose of buying a few current cards for the first time in weeks.

Target was my choice, and honestly, the selection hasn't improved much since I was there last. Outside of the 2017 flagship, which will be there at this time next year (witness: 2016 flagship still rotting on the shelves), my 2017 baseball choices were: Bunt, Allen & Ginter, Stadium Club and Heritage High Numbers.

It looks outstanding. And if Topps gave the wrapper a black background to attract buyers, then I'm testament that it is working. I nabbed it because of the wrapper.

It certainly wasn't because of what was inside. Let's go through these quickly:

Freeland receive the devil number this year, which is appropriate given my thoughts about the Rockies right about now.

This has been brought up repeatedly by myself and others: I'm fairly certain many of the backgrounds in Heritage (regular version and high numbers) are fake "Olin Mills" type backdrops. I don't know if this has been confirmed, but if it is, I don't like this product period and will be sorry I ever bought any Heritage cards this year.

Kintzler isn't even a Twin anymore and Hoffman is in every pack of every 2017 product. He is the Henry Owens of 2017.

Nothing but suspicious blazing blue sky. 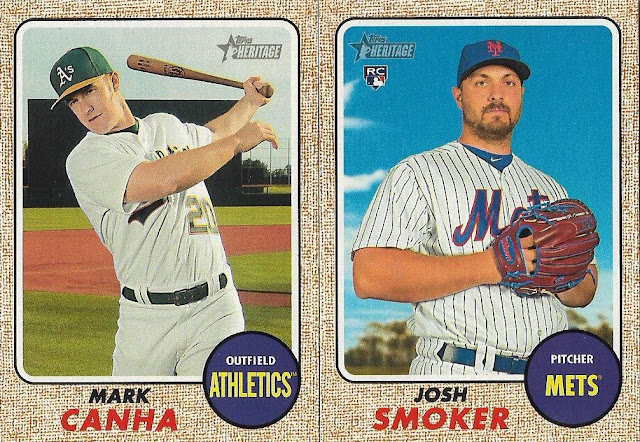 The wrapper was easily the best part of this pack.

Fortunately, I did buy a rack pack of Stadium Club, too, and pulled a Clayton Kershaw insert.

That made up for the annoying kid who kept darting from his mother in the checkout line to repeatedly dodge in front of me and try to sneak a blaster of wrestling cards into their cart, only to be repeatedly rejected by his mother.

Jeremya1um said…
Gosh, that would've been a terrible pack for a lot of collectors, including myself.
September 30, 2017 at 11:17 PM

Anonymous said…
Hansel Robles is a middle reliever, which is why you're not familiar with him. He's appeared in 170+ games over the past three years and he has been effective in the past... not so much this year, but I'm sure many Mets fans would blame Terry Collins' bullpen handling for that.
October 1, 2017 at 8:13 AM

Anonymous said…
I've wondered about the background before... In theory, I'm OK with fake backgrounds, but what they should do is pay some amateur photographers in each MLB city a base fee with no ongoing rights to take background shots of the ballparks... and use those as the "Olin Mills" backdrop. I'd rather see some unidentifiable part of Wrigley than fluffy clouds.
October 1, 2017 at 8:22 AM

Old Cards said…
Would rather have the actual 1968 cards. Back before designated hitters, division playoffs, free agency, player strikes, pants down to the shoes. Ahhh! The good old days!
October 1, 2017 at 8:50 AM

Matt Prigge said…
Hernan Perez's Heritage card this year looks like it was taken from the wing of an airplane. Nothing but blue skies and clouds behind him.
October 1, 2017 at 12:00 PM

Adam said…
I've got a hanger box at home I've yet to rip into but judging by this, I should keep low expectations. If you could bear to part with that Bronson Arroyo card, I'd be interested in obtaining it.
October 1, 2017 at 1:05 PM

Jafronius said…
2016 topps still on the shelves? Either the vendor has no new product to put up there or they're not paying attention.
October 3, 2017 at 11:05 AM