September 04, 2017
(I know I'm late, but Happy Labor Day. Once upon a time, this day was known as "the end of the summer." That was before high school athletes started playing games a week and a half before school started. Summer is getting shorter and shorter. Welcome to Cardboard Appreciation. This is the 262nd in a series): 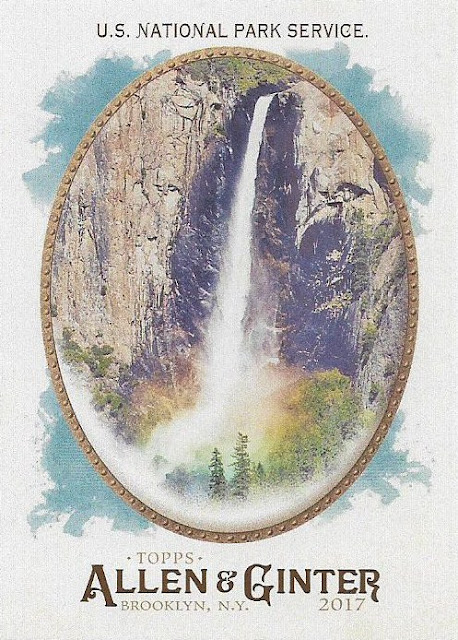 This seems like an appropriate card to show on one of the busiest days of the year for U.S. national parks.

It is kind of an odd card, even odd for Allen & Ginter. A&G is known for featuring objects on its cards, but this isn't even that. It's a card representing an organization, a government agency.

I don't recall if this is the first time A&G has devoted a card in its base set to an organization. I'm guessing there is at least one other instance. I'm not sure how I feel about this as a trend. It could get messy.

But parks? Who has a problem with parks? Yay, parks! I loved going to Greenwood Park when I was a kid. We weren't campers (thank goodness), but we did everything else, setting up shop near a tree or picnic table. Heading to the beach and the water. Jumping into the paddle boats. Walking through the back trails. Attempting to throw a frisbee. Running to the concession to get ice cream or fudgecicles before the pavement burned our bare feet.

Thanks to that background, my daughter now has her own park memories and will always enjoy the beach and the water. It's been a tough year for the coastal areas where I live what with all the rain we've received this summer. But, obviously, things could be much worse.

Let's turn the card over and find out a little more about what we're seeing on the front. 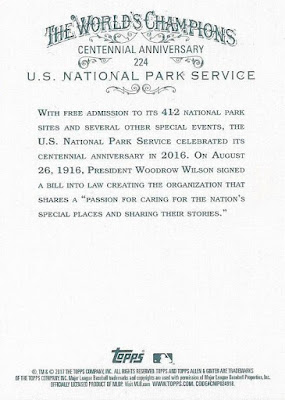 OK, good, there is something about why this is a card: it was the 100th anniversary of the U.S. national parks service last year. But there is nothing about what we're seeing out front -- and loads of empty space where that information could have gone.

Come on, A&G, I come to you to learn something.

A quick run through the google turns up that the front photo is Yosemite Falls in Yosemite National Park in California (it's been dealing with fires recently so watch out, Labor Dayers). I have no idea why that information couldn't be placed somewhere on the card. I hope it's not some sort of stupid legal copyright thing.

Anyway, this card has prompted me to present a little research here that I've been thinking of doing for awhile. I've always wondered about which non-humans and non-baseball players were included in each A&G set. There doesn't seem to be a separate list for this stuff (not that I've scoured the webs for it). So I'm going to get things going.

I'll start with the first A&G set I completed, from 2008. Later, I'll add others. I hope to have a complete rundown and then post it separately somewhere on my blog. But you know how that goes. It could be two years again before I remember that I'm doing this. But at least you'll have 2008! (heh).

Kind of the glory days for non-baseball notables (with a couple of glaring exceptions) and for Allen & Ginter as well.

I'm eager to see how the other A&G sets shake out.

Hope you enjoyed your Labor Day, whether you went to a park or not.

Me? I worked two of the three days. I always take Labor Day way too literally.

Hackenbush said…
Other than retired legends the non-baseball players are my favorite part of A&G. I've been less interested in the places and things. There are a lot of original tobacco cards that cover many of those subjects.
September 4, 2017 at 7:36 PM

Fuji said…
Thanks for doing the legwork. This checklist is awesome! I gotta dig through my A&G to see if I have a Golden Gate Bridge card. Somehow my collection will feel incomplete without that card.
September 5, 2017 at 12:19 AM

Bubba said…
2006 has a boatload of non-baseball players as well. That was back when the SP's weren't necessarily 301-350. Instead they filled that section with historical people. This U.S. National Parks was easily my favorite card this year (though I'm also partial to the panda). I hadn't known I was looking at Yosemite until reading this post though, so thanks for teaching me something! :D
September 5, 2017 at 10:47 AM